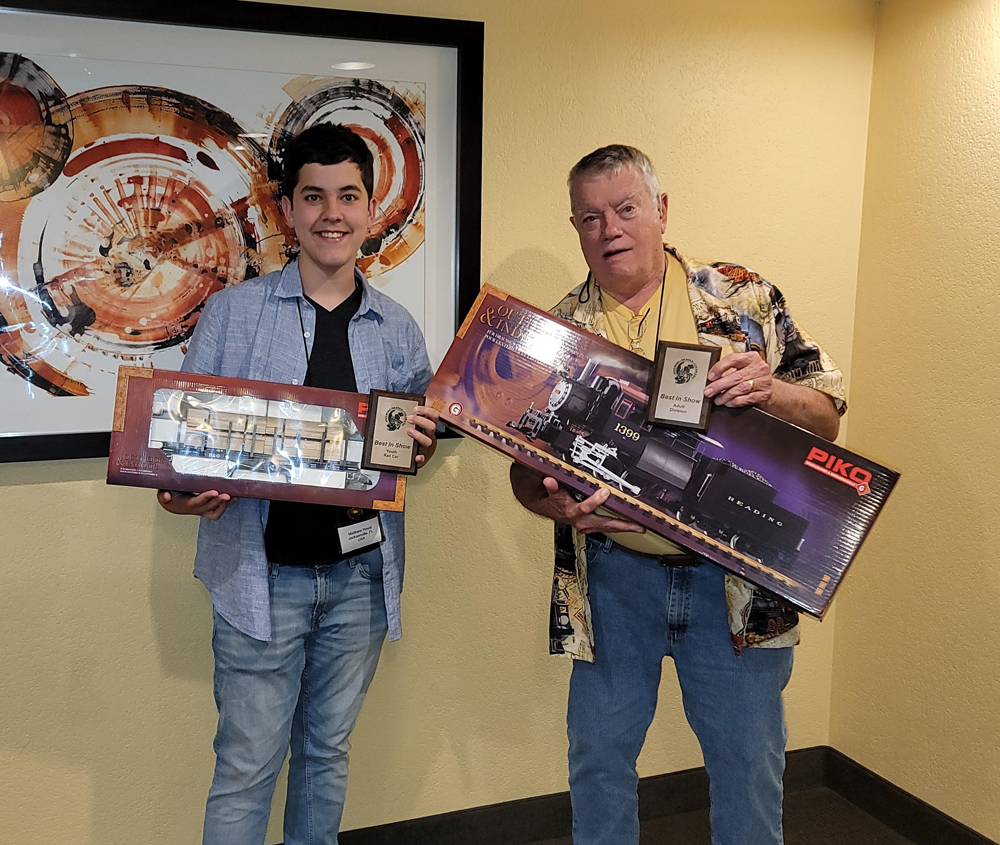 The 2022 National Garden Railway Convention saw a grandfather and grandson take home prizes in a modeling contest. Here’s a report from the former:

I attended the 2022 National Garden Railway Convention in Denver in June with my son and his family. Both me and my grandson entered models in the convention’s contest this year. We each won a prize.

I shipped a gas station model I planned to enter in the modeling contest to one of the members of the Denver Garden Railway Society, Bob Leise. Bob texted me to say that the package arrived damaged. When I arrived at the hotel, I found the model broken into several pieces. Thankfully, the tubes of cyanoacrylate adhesive I’d packed in my checked luggage had escaped the TSA’s attention. I repaired the model in the hotel room before the contest.

My grandson wanted to enter the Youth modeling contest, as he did at the 2021 National Garden Railway Convention in Nashville. The challenge was to create a load for a center beam flatcar. He cut 1×2 pine boards to fit the flatcar and created wrappers to protect stacks of plywood. He named his fictional lumber company after his dog and my dog: the Pepper-Murphy Lumber Company.

We entered our models in the contest on Wednesday. As at other conventions, the attendees and the public voted on their favorite models in both the Youth and Adult categories.

We really enjoyed Denver Garden Railway Society’s convention. It was well run and had plenty of outdoor railroads to visit. There were good clinics with great information. Our plan is to go to next year’s convention in the Bay Area of California. My grandson will age out of the Youth contest (He will be eighteen next summer), so he is challenging me to enter the adult competition with him.

Read more by the author:

Kitbash a structure from a birdhouse