Home / How To / Projects / Creative ideas for your garden railroad

Ten ideas to try on your line 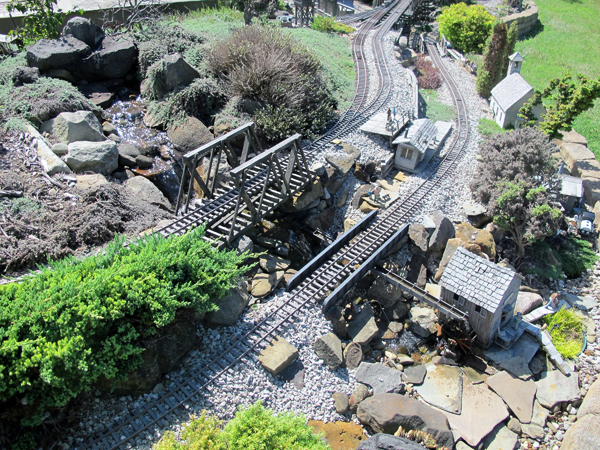 Photo 1
This plunging waterfall is on the author’s Hoot ’n’ Holler Railroad in northern Ohio. It is “pondless,” with an underground pump reservoir beneath the mill.
Don Parker 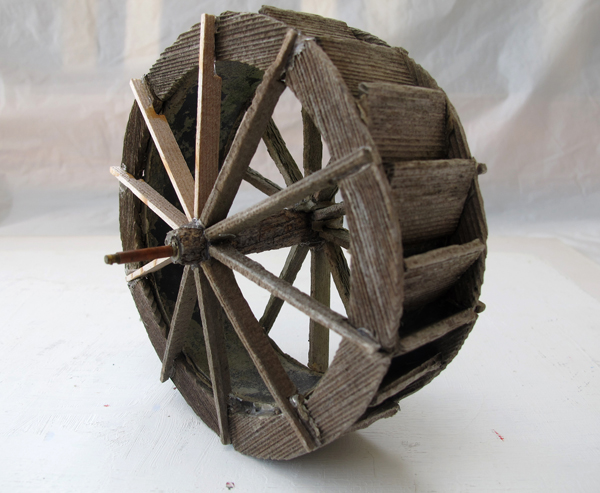 Photo 2
The waterwheel from the mill in photo 1 is built around a section of 4″ plastic drain pipe.
Don Parker 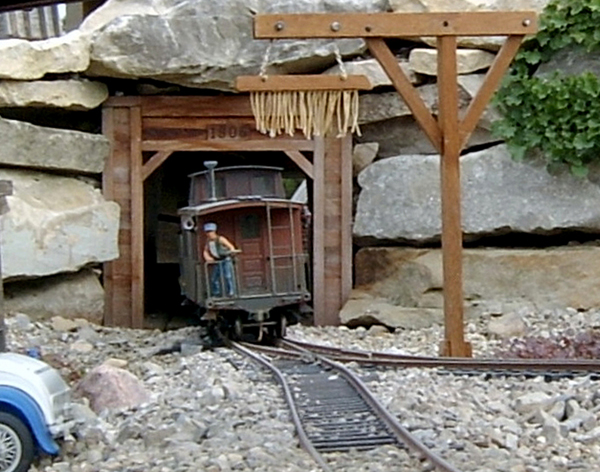 Photo 3
This telltale on the author’s railroad alerts brakemen on top of railcars of an approaching low overhead clearance.
Don Parker 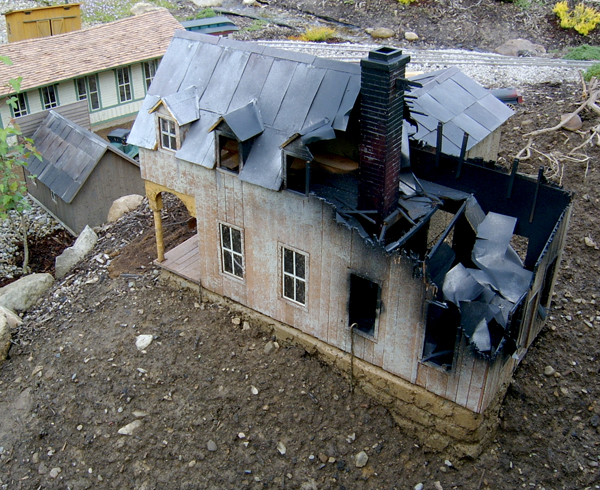 Photo 4
This partially burned hotel is on the author’s former and current railroad. (Photo taken on the former railroad.)
Don Parker 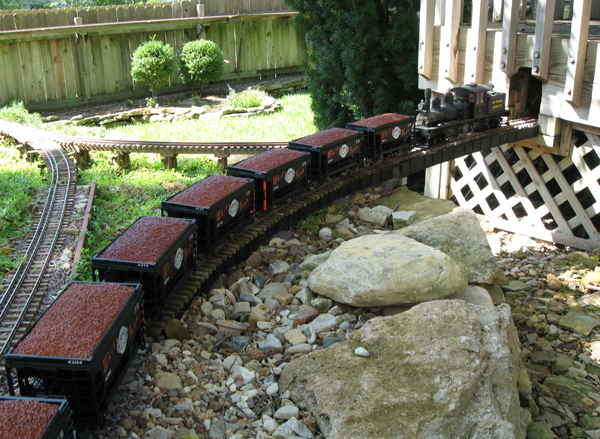 Photo 5
John D’Aloia came up with this idea to make a weatherproof storage track for his trains.
John D’Aloia 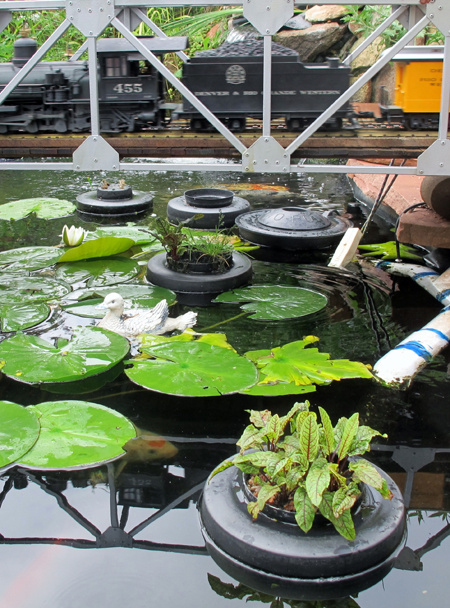 Photo 6
A floating planter allowed Dean Vande Berg to put a non-aquatic plant in the middle of his pond in Westminster, Colorado.
Don Parker 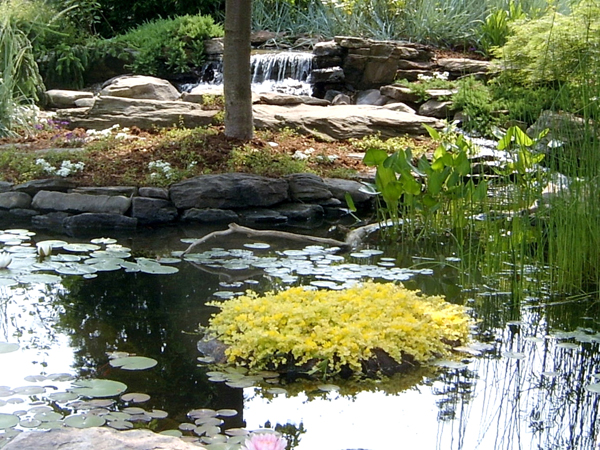 Photo 7
Cecily Allynn made a solid island in her pond to contain a vigorous escape-artist plant (creeping Jenny).
Don Parker 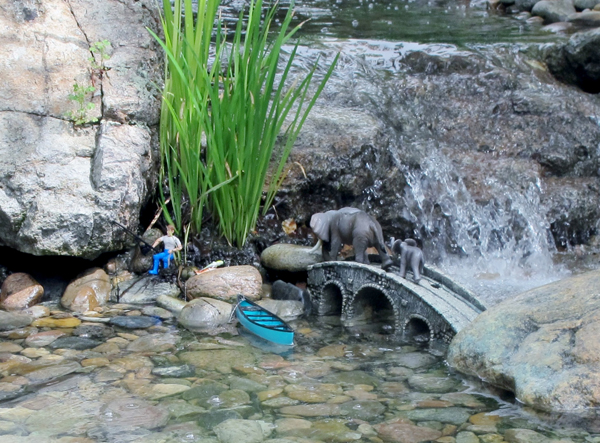 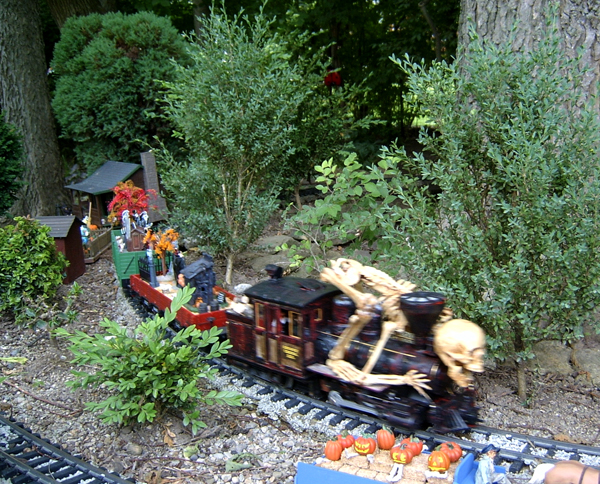 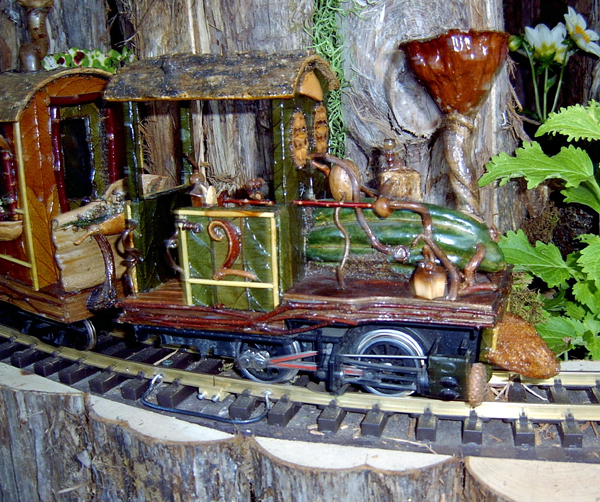 Photo 10
The Applied Imagination team built this innovative layout and train for the National Garden Railway Convention in Cincinnati in 2015.
Don Parker
Most of us have some favorite item or scene on our railroads that was the product of insight or careful thought and planning—in other words, creativity. Part of the benefit of being in a club or informally sharing the hobby with other garden railroaders, or reading this magazine, is getting ideas from each other. One person’s novel creativity may become another’s solution to a persistent question or problem. In that spirit, I’d like to share some ideas I’ve put to use or seen used in garden railroads I’ve visited.

I’ve always enjoyed hands-on creative activity, whether in painting or model railroading, as opposed to visiting museums or running trains. Getting ideas, puzzling out how to make them work, plunging in and trying it out—these are what turn me on. Infrastructure maintenance? Weeding? Track work? I’d rather be in my shop tinkering or in the garden putting in a new plant.

Photo 1 shows a composite of several innovations I’ve come up with. The multi-level waterfall ends up in an underground reservoir to recirculate to the top (a “pondless” water feature). The upper bridge was left over from my former garden railroad and the river was planned to accommodate it, with flat, blocky rocks to support its ends. There was no bridge to carry the lower tracks, so that structure had to be built. At the same time, the water-powered mill needed a source of water at the right height to turn the wheel. A friend built the sluice, which was designed to take water from the top of the lower waterfall, so the new bridge had to be high enough to allow the sluice to pass under it. That led to choosing a metal through-girder bridge, which I built of brass plate. The sluice fit snuggly under the bridge and the mill was in business.

There was only enough room to place the little station in the photo on the lower track, but most of the passenger traffic was on the upper track. A two-level station platform solved that. A missing portion of a tie in the girder bridge is the location of a signal magnet, raised by an air motor. In the raised position, it signals a train with an on-board controller to pass the station without stopping.

Photo 2 is a closeup of the water wheel of the mill in photo 1. The wooden components of the wheel are all glued to a section of 4″ plastic drain pipe, which ensures that the wheel stays round and won’t deteriorate and fall apart. This wheel has been in use for about 20 years, with only occasional repairs (notice several newer spokes).

Photo 3 shows a telltale that warns brakemen on top of rail cars of an approaching low overhead clearance. This was built by a friend of mine who died a couple of years ago. Although it is a bit oversize for accurate scale, it has sentimental value that will ensure it stays where it is.

A burned-out building creates a scene with its own history (photo 4). The burned-out section was constructed as part of the whole project, carefully placing “burned” parts in a realistic fashion, showing how the roof collapsed on top of the burned ruble. Black spray paint was used to “char” the building.

John D’Aloia, a member of the Northeast Kansas Garden Railway Society, solved a need for out-of-the-weather train storage by running a spur under the porch on his house (photo 5). Quite a long train can be quickly sheltered this way.

Water features can stimulate creative ideas, as well. Photo 6 shows an innovative way to add more plant variety to a pond. Dean Vande Berg utilized a floating system to show off an ornamental plant that is not a water plant. This is red-veined, or bloody, dock (Rumex sanguineus, Zones 5-8), which likes moist sites but must be kept above water level, since it is not a water plant.

Photo 7 shows a situation similar to photo 6, but this is an anchored island in a pond adjacent to the WilloWood Railroad built by Cecily Allynn near Cincinnati, Ohio. The plant is golden creeping Jenny (Lysimachia nummularia ‘Aurea’, Zones 3-8), often considered aggressive, even invasive, but here contained on an “Alcatraz” island.

Whimsy can add interest to a water feature. In photo 8, a creative vignette incorporates a mom and baby elephant crossing a stone bridge in a setting out of a fantasy world. Curtis Jones and Judith Seaburn came up with this one for their John Galt Line in Niwot, Colorado.

Back on dry land, photo 9 shows a spectral scene on Chuck and Pat Ellsworth’s garden railroad with a Halloween theme. This type of fantasy doesn’t have to be seasonal, as everyone on the tour seemed fascinated by the Ellsworths’ creativity.

The ultimate creativity is found in the innovations of the Applied Imagination team. The locomotive in photo 10 appears to have a boiler made from a cucumber—and most likely it does, since Paul Busse’s team uses only natural materials in their creations.

If you have a unique idea that you have used to create something special in your railroad’s landscape, I’d like to hear about it. You can contact me through the magazine’s e-mail.

One thought on “Creative ideas for your garden railroad”