Ideas to use (and elevate) this larger scale 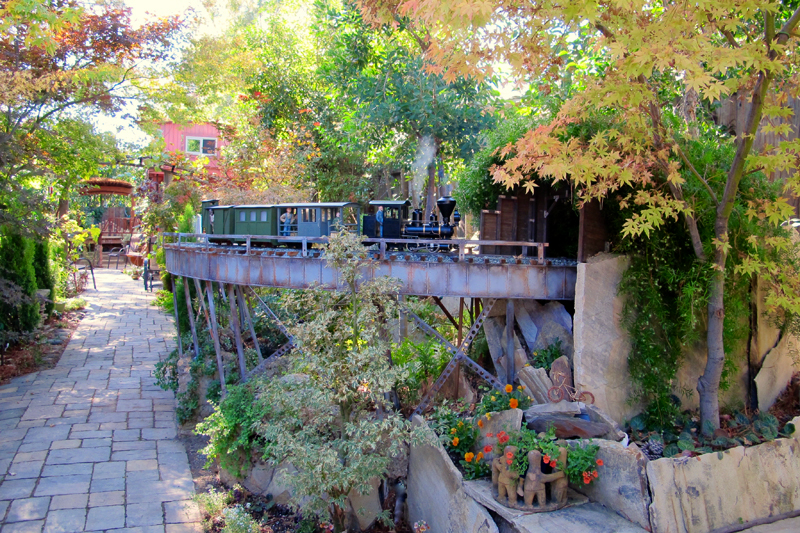 The author and several helpers modeled the Alhambra Trestle over the course of three years. A 7/8″ Fairymead pulls Dave Frediani cars past 22 Japanese maples, both dwarf and semi-dwarf, back to the caboose.
Nancy Norris
After decades of building and maintaining garden railways, I’ve built my own railway for low maintenance and live-steam access. Running on gauge-1 (1 3/4″/45mm) track, my trains model 2′ narrow-gauge industrial railroads. Generally, large scale is from 1:32 to 1:22.5, but my 7/8″ equipment is 1:13.7. It’s easily visible, whether on the workbench or flying among the “leafy” plants. On my “Aggie” (Agriculture & Gravel Elevated), trains travel waist-high at less than 1% grade and get closer to chest height as the backyard goes downhill 2%. 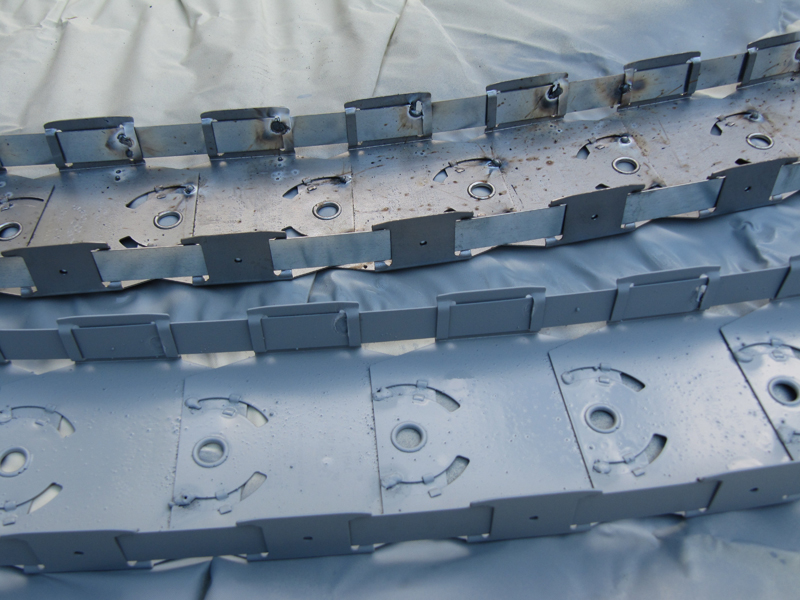 The Flex-C Trac shown here is 35⁄8″ width, spot-welded to retain the desired curve; note tabs have been hammered flat. The 6″ piece has two coats of paint with primer.
Nancy Norris
Bridges out of benchwork
Most of the Aggie’s sub-roadbed is metal. Steel “Flex-C Trac” beams are rigid, straight 16- to 20-gauge galvanized steel. When sandwiched with another beam of the same size, one creates a steel stud strong enough to build hospitals. I use  10′ x 2″ x 6″ Flex-C Trac and cut the steel to length with an angle grinder.

The 6″ wide beams allow the addition of railings, which have become my security system. Self-drilling screws  easily penetrate the steel to fasten boards, plastic girders, or ceiling-tile screw eyes for railings and fences. These walls prevent runaway trains from plunging five feet down to their death.
Flex-C Trac (flexabilityconcepts.com) is a metal framing product available in 35⁄8″- 6″ width galvanized steel. Swiveling sections create a flexible curve or S in any configuration. I get them at an industrial park in the next town.

Steel is relatively inexpensive when factoring in the cost of extra supports under wood or plastic benchwork. 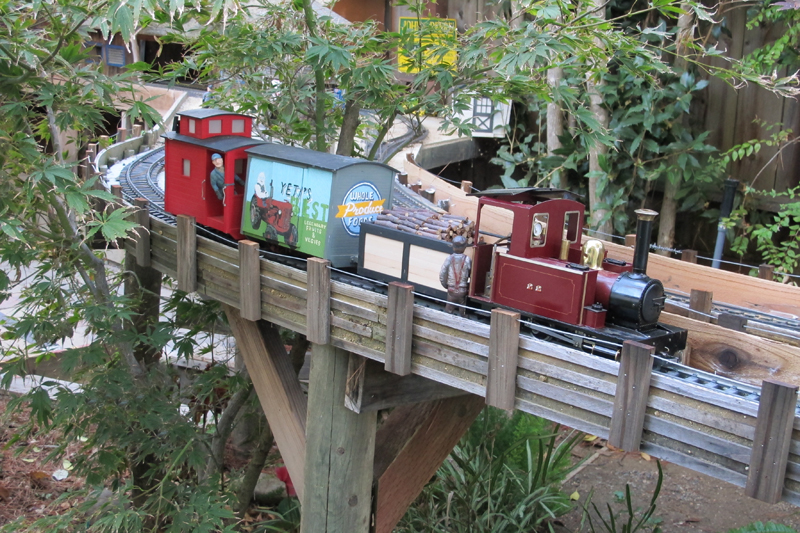 Flexible redwood bender board are fastened/screwed to Flex-C Trac with 1″ redwood spacers for greater roadbed clearance. Peeler-log support post are anchored in post-hole concrete.
Nancy Norris
Ground supports
I’ve seen raised beds sink, and it would be a shame to find benchwork sinking, thus changing the grade. My posts are buried deep in the ground with post-hole concrete. In the north, posts must be buried below the frost line to prevent heaving.

In my maple grove, I chose “peeler logs” because of their greenish color (copper sulfate preservative). Railings and retaining-wall facades fasten to 4″ bender board. In the vegetable garden we sank galvanized pipes, welded the Flex-C Trac on top, and eventually hid them with hypertufa. 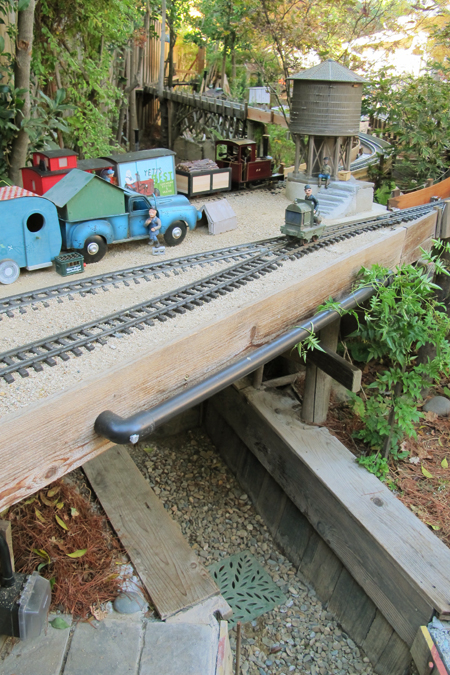 Three pits save knees where the mainline hugs the 1:1 fence.
Nancy Norris
Let us in
We’ve found fun ways to get inside the loop of our elevated track. Tired of crawling under my elevated line, I dug deep underneath and lined the pit with stone and wood. A sump pump drains the pit when it rains. Other railroaders build steps over their elevated line replete with railings. On my raised vegetable bed, a narrow path snakes adjacent to the main line (all steel under the track) to help with live-steam access. 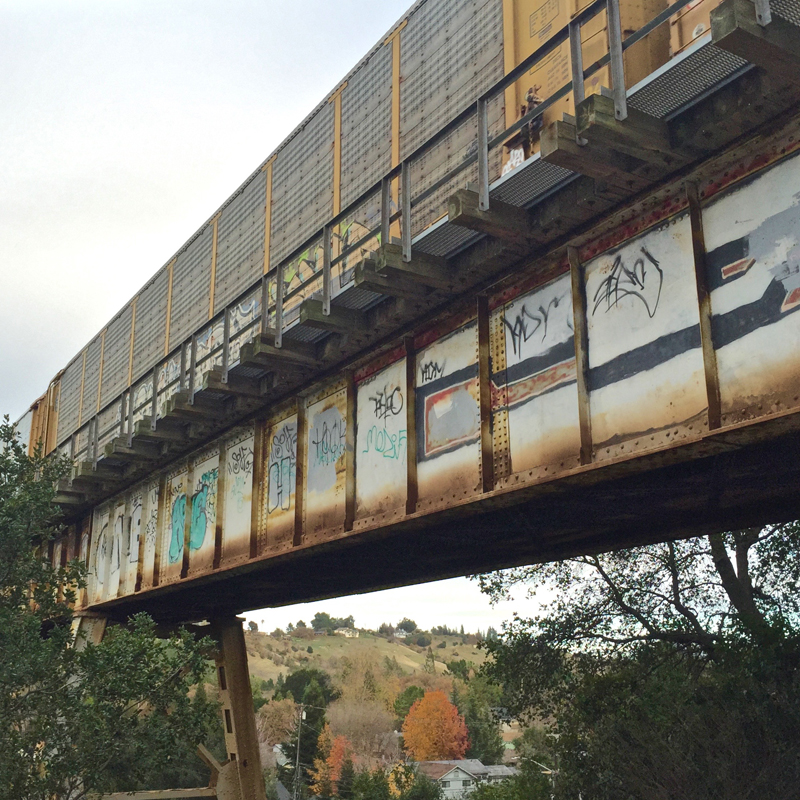 My helper, Nick Schofield, welded the railings on the Aggie’s Alhambra Trestle (lead photo). He admits to clambering underneath the prototype’s girder and along the rails during his teen years.

My mother clucked about the rust, “it should be painted!” BNSF tried to spruce it up one year but had to stop when the locals complained that it smelled like paint! 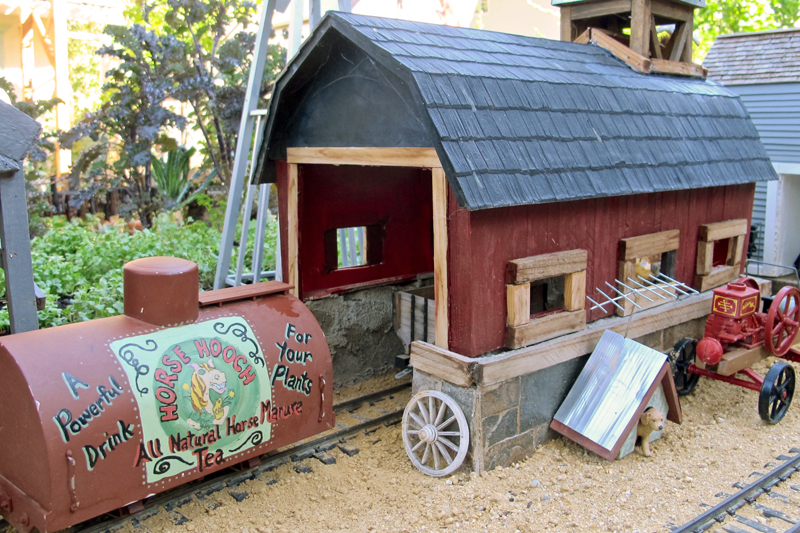 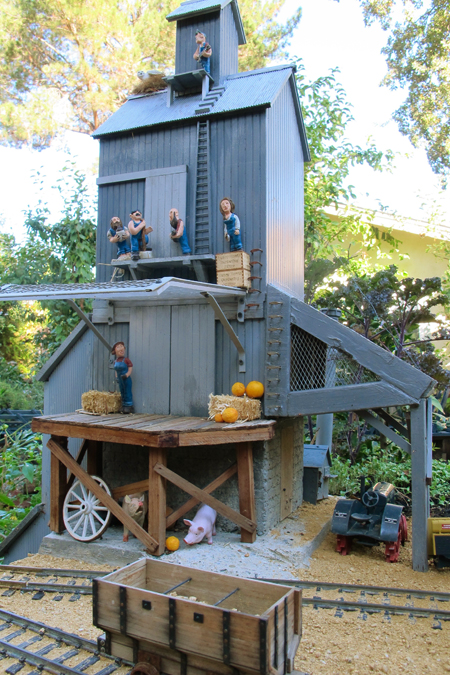 Bigger doors and five additions enlarge the grain elevator from ½” to 7⁄8″ scale. The first floor door was embedded in the concrete.
Nancy Norris
Up-scaling buildings
7/8″ = 1:13.7 is close enough to dollhouse scale of 1:12 (1″=1′), as in my greenhouse car (Feb. 2016, GR). For the farm’s car barn, I used a plastic barn mailbox, and raised it with a 4″ concrete foundation, which I covered in tile from Home Depot (above). The whole farm sits on a massive elevated tile-edged concrete wall.

Likewise, a grain elevator needed enlarging (at right). I added a first floor of concrete (scored to look like blocks), a tractor port, a loading dock and overhang, and a big section that lowers two floors to empty grain at the bottom of the hill, left. These extensions, plus a silo (dryer vent duct with a ceiling-light cap) blow up a formerly ½”-scale building – the siding is finer, but no matter. 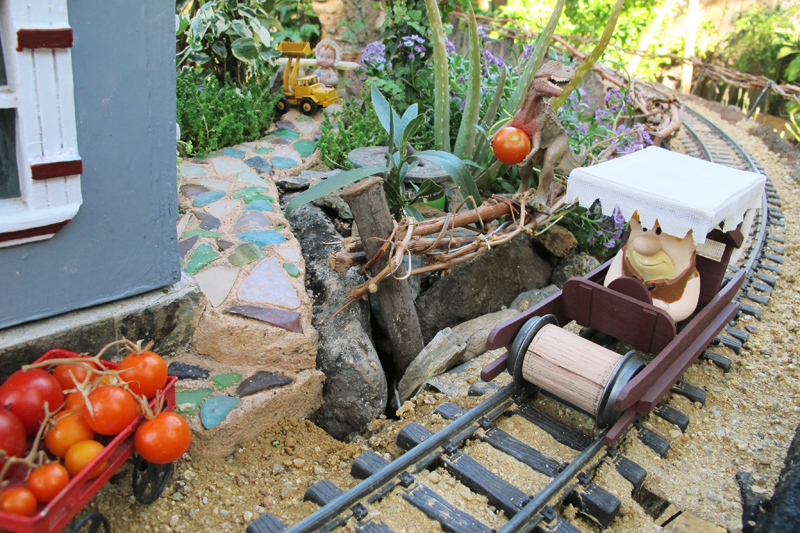 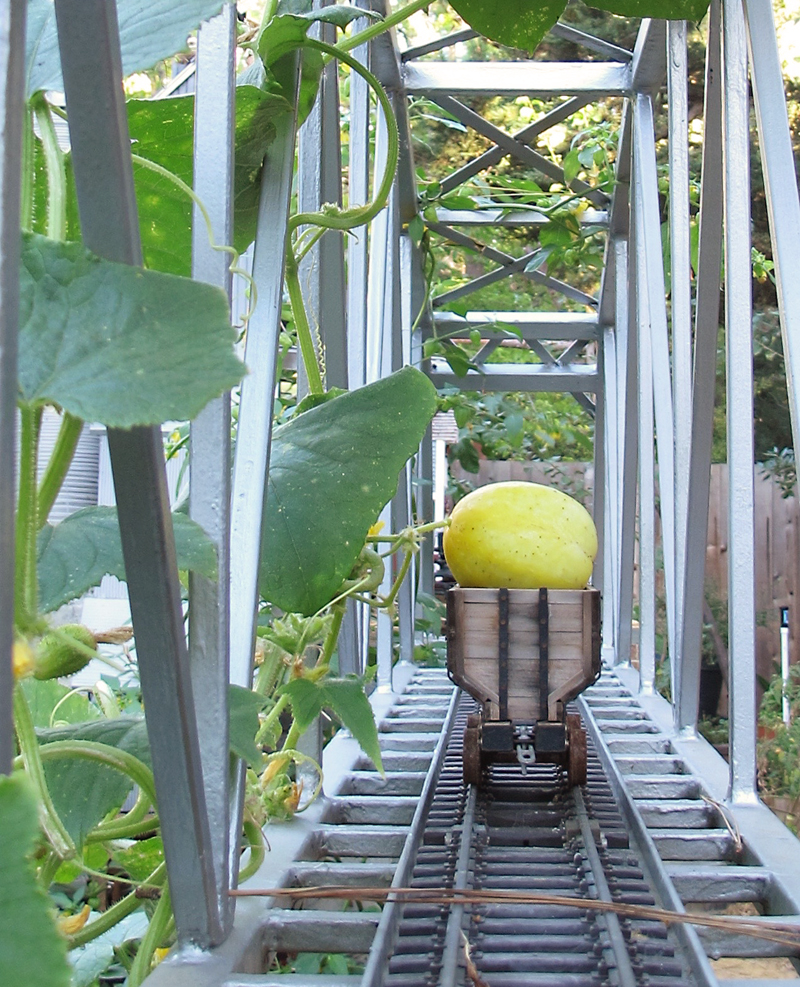 Silly cucumber doesn’t quite fit this scale.
Nancy Norris
The magic of models
In my world, dinosaurs live in a theme park adjacent to the farm. This section keeps the kids busy. Full-scale grapevines twine around wire for railings atop Cretaceous Caves. Small children like to push the Barney Rubble car on his rounds to patrol once-carnivorous dinosaurs now eating tomatoes.

A walk on the beach produced sea glass as pavers for the cottage garden growing dwarf aloe vera (good for sunburn) and a seedling bay laurel tree (good for soup).

My original plan was to see veggie vines climbing a high bridge. Finally, in fall of 2019 my lemon cucumbers reached that goal. I harvested one in a Steve King 7/8th” bin (thetraindepartment.com). Always something new in the garden!
Watch a video of my railroad in action here. 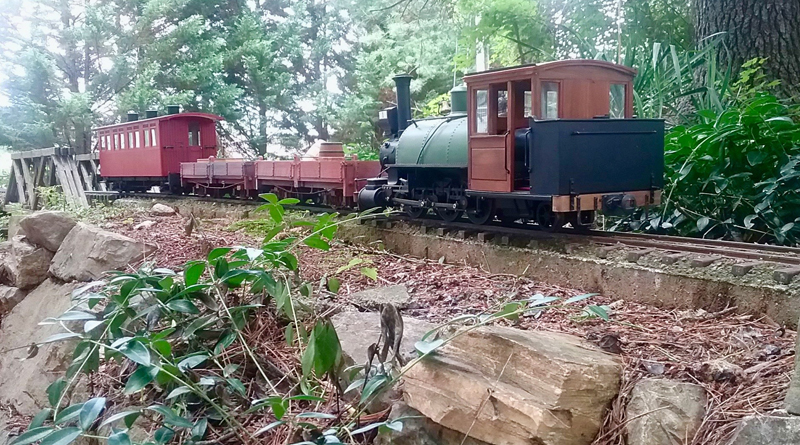 A Baldwin 0-6-2 export locomotive plods through a jungle-looking area of periwinkle vines on the 7⁄8″ scale railway of Stephen King in Virginia.
Stephen King 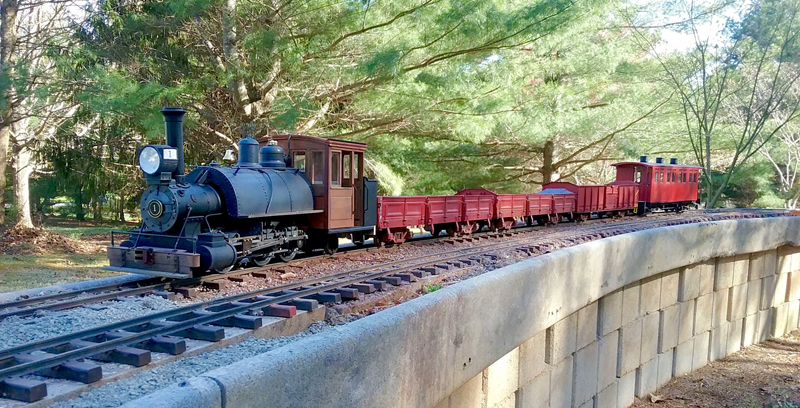 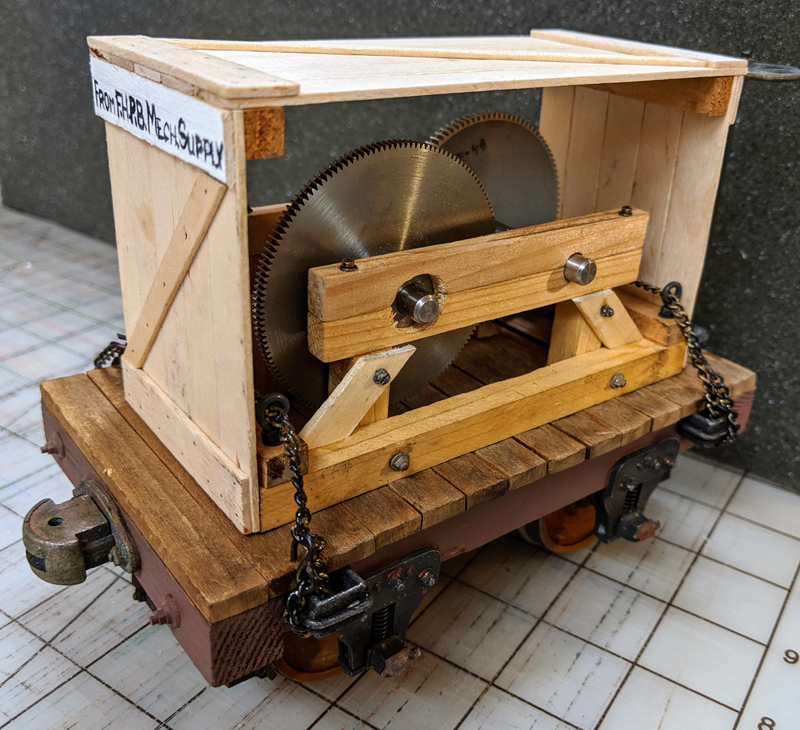 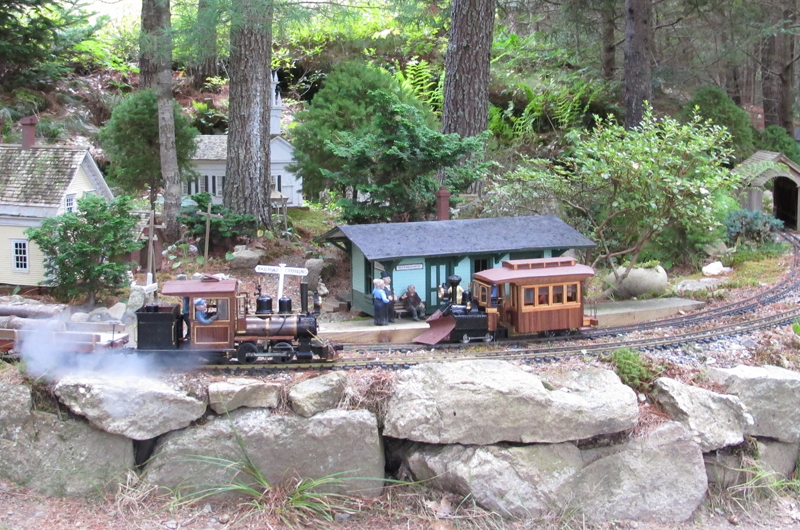 Live-steam raised rails
Stephen King
Rocky Mount, Virginia, Zone 8
Those who may remember my Maine 2′ railway from the early 2000s will note that I have moved on to other interests, but still model exclusively 7⁄8″ scale, 24″ gauge.
The locomotive is scratchbuilt battery-electric, with a G3 decoder. Prototype is No. 1 of the Perus Pirapora cement railway near Sao Paulo, Brazil. The locomotive still exists, but it’s in poor condition. The 10-ton wagons and coach are Dundas Tram equipment.

The photos show the roadbed construction used on much of the railway. There is a continuous cast base of concrete 5″ wide x 2½” deep. Track is code-250 rail with AMS “narrow gauge” plastic ties, which are cut out of the tie strips and separated to a realistic spacing. A mix of crusher fines and Portland cement is applied dry and wetted down to form a permanent ballast.

Part of the railway is built on a block wall, made from Versa-Lok brand of decorative blocks (versa-lok.com). The second photo shows the backside of the wall. Blocks are 80 lb. each and trapezoid shaped, so they can form a curved wall. On top of the block is a wider trough made from Trex lumber and filled with materials to make a track base. Note that the AMS ties have been separated from the standard strips to make a realistic spacing for 2′ gauge.

7/8ths Lounge
Vance Bass
Albuquerque, New Mexico, Zone 7
This is my 2019 swap project for the 7/8ths Lounge (7-8ths.info). The Lounge is a discussion site that focuses on 1:13.7 scale, 7⁄8″ to the foot models of 2′ gauge trains on 45mm track. Being a scale with little ready-to-run equipment, Lounge members tend to build from scratch, or heavily modify existing equipment. For the past 10+ years, some members have signed up for a “secret project swap,” in which you get the name of someone who doesn’t know you’re building a project for them, and you get a project from someone you don’t know, until it arrives.

My project started with an 8′ flatcar that had been dropped and damaged. I rebuilt it and added brake gear. Since the recipient’s railroad theme is an astronomy observatory, I found some large (3″) gears on shafts, which might have been used for a telescope mount. I built the cradle from stripwood and popsicle sticks (this year’s swap theme). Lots of NBW castings and truss rods made it look sturdy. I chained it down, then added a crate made of paint and coffee stir sticks. The beauty of 7/8n2 scale is the incredible amount of detail you can add (without needing a magnifying visor). Even small cars like this one are satisfyingly hefty.

The observatory staff is pleased with its new precision gears, and I enjoyed this project. I will definitely build similar ones for my own railroad.

Small prototype, larger scale
Eric Schade
Phippsburg, Maine, Zone 5-6
I volunteer at Wiscasset, Waterville, and Farmington (WW&F) Railway (wwfry.org), featuring Maine 2′ gauge historic locomotives and cars. I want to represent this stuff in model scale. I started out building it in 1:20.3 scale, and while fun, it didn’t quite work for me.

I started making rolling stock, locomotives, and Sculpey figures in 7⁄8″ scale. Things could be made like the real stuff, with boards and scale nuts and bolts that were big enough to work with. The cars and engines were BIG, which is cool, and they had the tall and wide 2′ gauge look.

I had to re-lay some track and build new covered bridges on my railway, which was all good fun. New stations and other buildings followed, but the 1:20 scale church and homes still look great in the background.