Home / How To / Large Scale Layouts / The Fairplex Garden Railroad 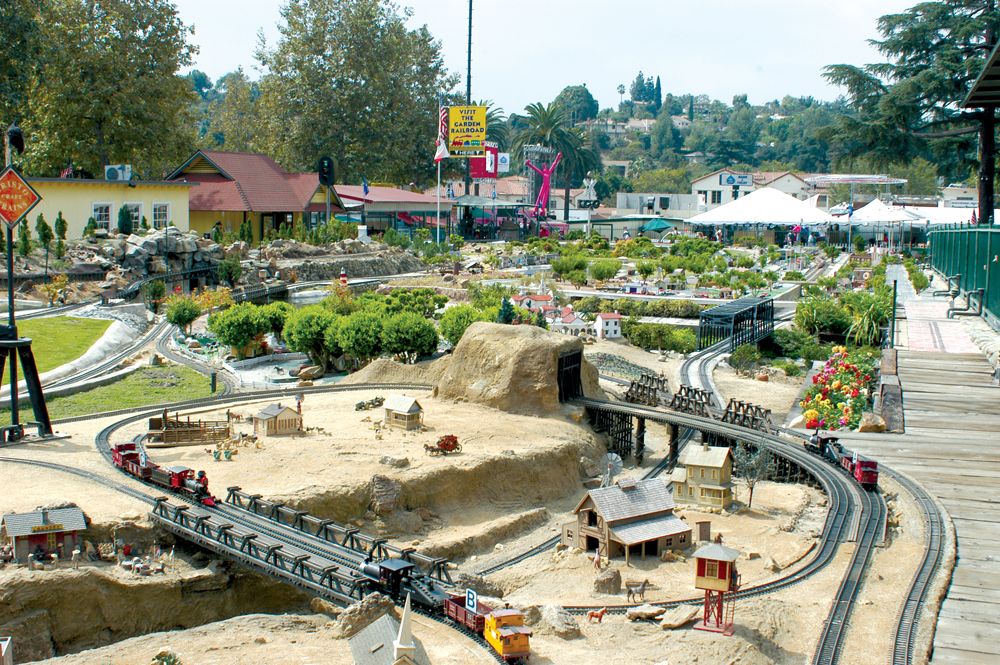 It’s a pleasant afternoon at the 2006 LA County Fair in Pomona. Bleachers are placed at various areas around the fence so people can sit and watch the trains run. Photo by Don Emmons

Narrow-gauge trains of a variety of makeups show what might have been working the mountain’s lumber and mining camps. Most of these volunteer-owned trains have been weathered and some are scratchbuilt. Photo by Don Emmons

By June 6, 1997 (when this photo was taken), the old strap-iron track had been removed and new gauge-1 track was being installed. The two bridges and the concrete elevated highway in the center of the photo are still being used. Archive photo

Volunteers rejuvenated the landmark garden railroad starting in 1996, developing it into the outstanding display that continues the tradition on this site since 1935. Photo by Don Emmons

The longest bridges on the railroad are located at the front side of the mountain area. In the foreground (not a part of the mountain line), a Santa Fe freight crosses a 15' bridge that the blue line runs over. The other two bridges are part of the mountain line. The black metal bridge is a curved, 30', through girder that was built in 10 sections. The trestle is 25 feet long. The forest trees are newly planted Alberta spruce. Photo by Don Emmons

Inside the front fence at about the middle of the railroad is the Pomona train station and a sandlot baseball field, a small park with kids on swings, and a couple of kids on skate boards stopping by to watch the game. Photo by Don Emmons

This aerial shot shows the entire the 100' x 300' railroad, which is located in the center of the fairgrounds. Archive photo

A vintage Mikado hauls a freight train that carries a special car. The limited-edition white reefer is a USA Trains car commissioned to commemorate the new railroad’s 10th anniversary. Rugged-looking dwarf Chinese elms with thickened trunks add a sense of age to the scenery. Photo by Don Emmons

Over the years, the mountain area has been a problem, as the trees have grown out of scale. They were pruned regularly, but became so unrealistic that they had to be removed. In January 2006, more than 100, 18"-tall dwarf Alberta spruce were planted. Photo by Don Emmons

The Fairplex Garden Railroad in Pomona, California is located in the middle of the Los Angeles County fairgrounds. The 100′ x 300′ railway has occupied the same space since 1935 and has been a part of the annual fair every year except for the war years of 1942-1947. However, the fair’s train display is even older.

The first LA County Fair was held in 1922. In 1924, an exhibit included a static model of a Pacific Electric Railroad trolley displayed in conjunction with a diorama of the LA County Parks & Recreation Department’s Puddingstone Reservoir and Recreational area. That area is adjacent to the fairgrounds. For the 1925 fair, the trolley was motorized and a length of track was added to the display.

By 1935 the display had grown much larger and was moved outside the tent where it had been housed. Herman Howard built the trolley model and other railroad pieces housed in the tent. He was a shop teacher at Pomona High School and, with the help of his brother, Homer, laid out a 1/2″ scale, outdoor railroad at the fairgrounds for that year’s fair. After the 1935 fair, the size of the railroad was increased to 100′ x 300′ and has remained that size for more than 80 years.

About 80 volunteers maintain this garden railroad. Some younger members work in operations and can handle the entire railroad during fair time. Volunteers work year-round on the railroad, adding new items, but mostly maintaining the gardens and tracks.