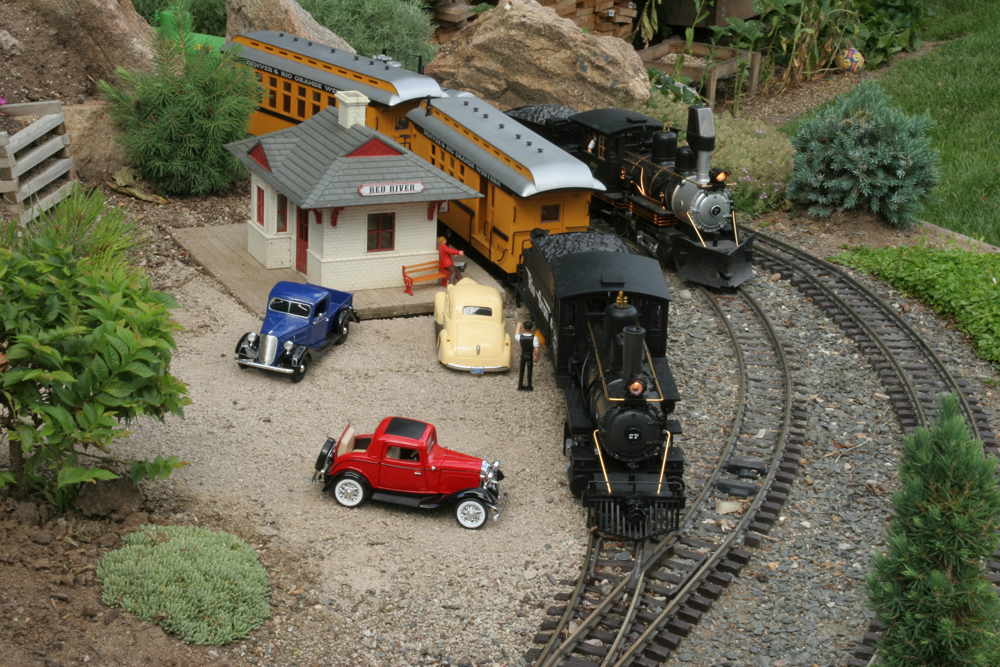 The railway at a glance

LGB Moguls provide the primary motive power on the Virginia & DACS Railroad. This railroad prominently features scratchbuilt trestles, bridges, and cribbing. A wide variety of young dwarf conifers, slow-growing shrubs and perennials are beginning to fill in the landscape, including red-leaved dragon’s blood sedum and Gold Cone juniper in the right foreground. Photos by D.A. Bertram

An overview of the entire railroad. The author wanted to provide the viewer with the ability to enjoy the railroad at a comfortable angle. This was accomplished by raising the bed, which created sight lines that are more attractive to observers. An elevated railway is also much easier to work on.

Two trains at the station—the first in has been released by the automatic DCC system as the second arrives. The tree behind the station is a seven-year-old Rocky Mountain white (limber) pine and the tree at left is a very hardy dwarf-elm variety, Jacqueline Hillier. The parking lot is made of screened, recycled, crushed concrete. Red River Station is a Piko kit on a laminated cedar platform.

Nº 417, a Bachmann 2-8-0, takes its train across the drainage ditch in front of the spur trestle. Woolly thyme cascades below the track, while a few blossoms of green santolina peek through the trestle. All trains are controlled through automated DCC operation.

The east portal of the “train barn.” The 1/4" plexiglas door slides into rabbeted slots in the portal to provide weather-resistant storage beneath the mountain for trains. The other two portals are similarly protected.

With the limited area for the railroad, the necessity for a raised garden (to curtail his dogs from running through it), and the need to develop some vertical presence, the author needed a place to store trains. The “train barn” became an integral part of the railroad. It is 14' long by 3' deep by 30" high at the rear, with three access doors. Inside are three tracks on which most of the daily rolling stock is stored during the warm months. In the winter, the rolling stock is stored in the house.

The gold mine utilizes HO track for its push-cars. Sweet violets, like this plant near the mine entrance, have naturalized throughout the railroad.

Nº 7 passes the water tower on the inner figure-eight. Behind the caboose is the up-hill grade of the elevated spur. In the background is the trestle over the lower portion of the figure-eight. Violets crowd the track. They are not in scale, but they are fun when in bloom. Coral bells and green santolina come into bloom for many weeks during the summer, picking up soon after the violets have finished blooming.

The road in the foreground is recycled crushed concrete. The lane going up the hill is red crusher fines (known in Colorado as “Red Breeze”), stabilized with concrete-patch adhesive polymer, diluted 4 to 1. Groundcovers, including woolly thyme and a red-leaved dragon’s blood sedum, grow near the track. Young dwarf conifers, slow-growing shrubs, and perennials are beginning to fill in the landscape.

Nº 7 (left) is on the inner figure-eight as the 2-8-0 approaches on the outer loop. The bright yellow shrub is Golden Divine barberry, a new variety that stays colorful all summer, then turns a brilliant reddish-orange in the fall.