Home / How To / Gardening / Using succulents on your garden railway 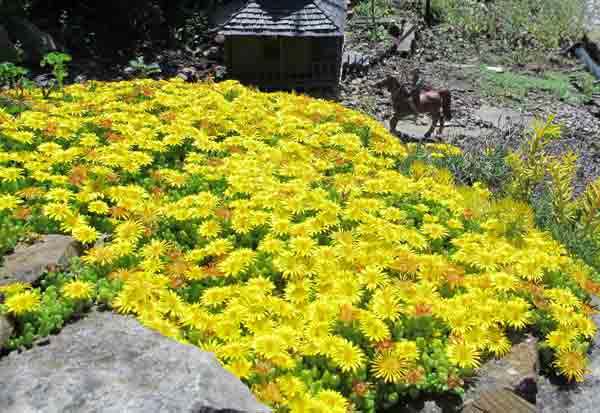 1. Hardy African iceplant makes a great groundcover, here blooming in late May. On the right is Angelina stonecrop, with yellow-green leaves, rising to 4-5″ tall. (All photos were taken on the author’s Hoot ’n’ Holler Railroad unless noted.) Photos by the author
Don Parker 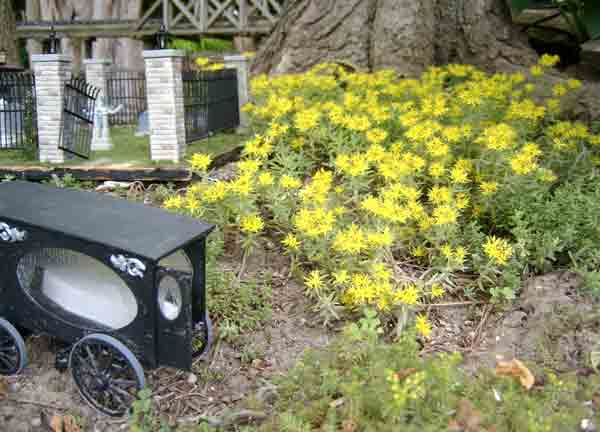 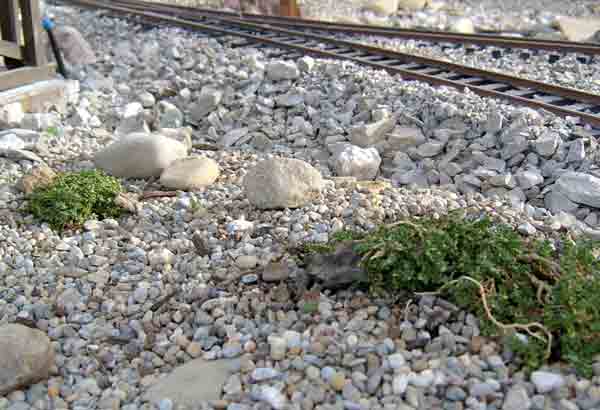 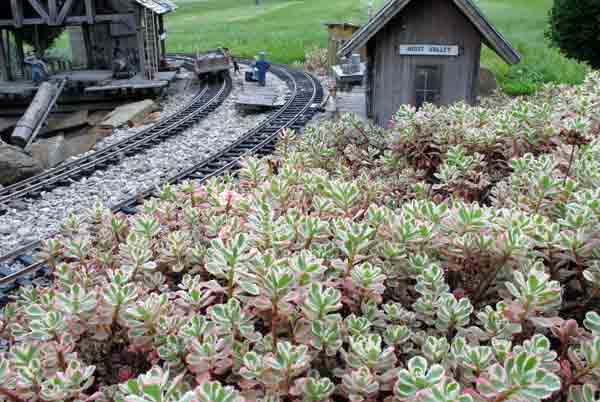 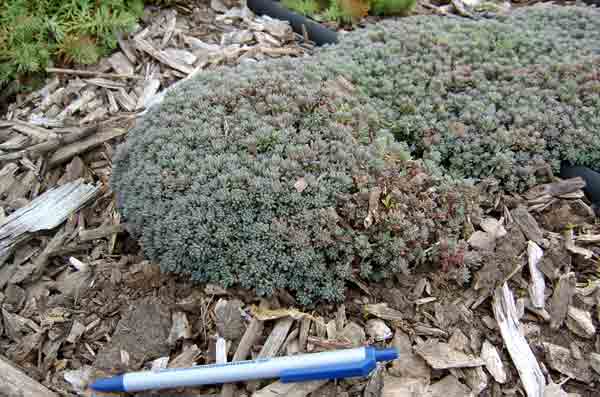 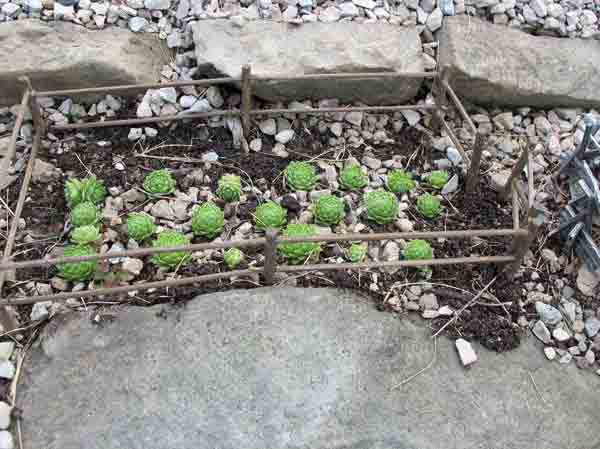 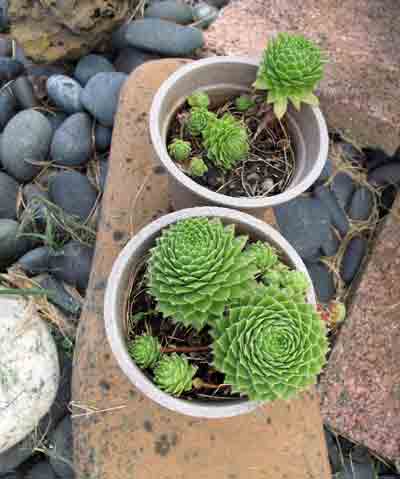 7. This is the nursery where the little “chicks” are grown to make a cabbage patch.
Don Parker 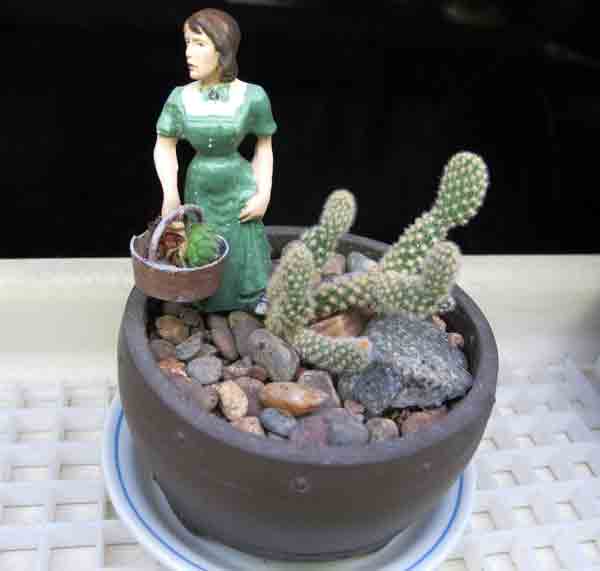 8. A small cactus, probably a mammilaria, would look right at home in a desert area. (Taken at the Kendal at Oberlin miniature-cactus display.)
Don Parker 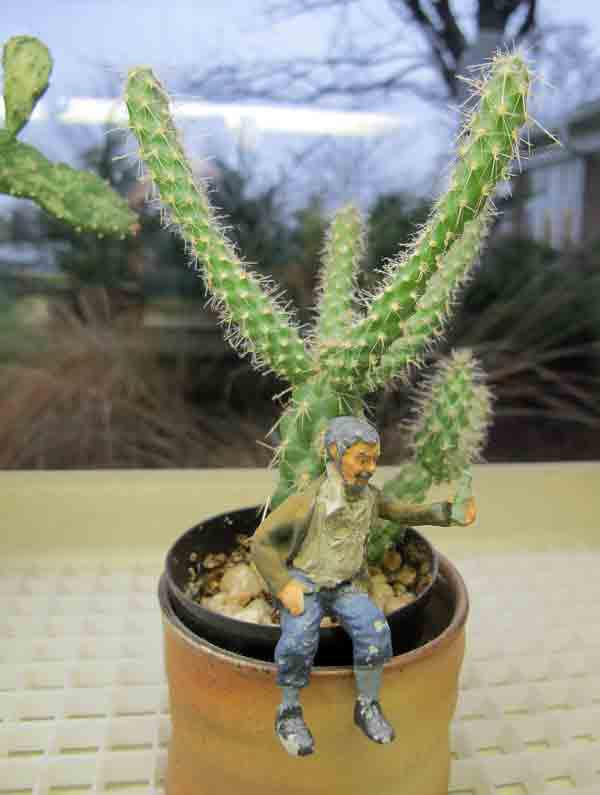 9. This cactus (probably an echinopsis) could be a miniature saguaro. (Taken at the Kendal at Oberlin miniature-cactus display.)
Don Parker 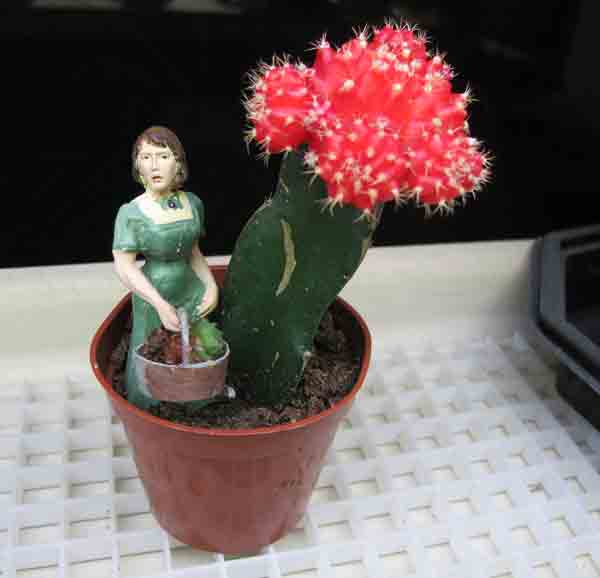 10. A beautiful oddity, this ruby ball cactus is made by grafting a red cactus onto a green cactus.  (Taken at the Kendal at Oberlin miniature-cactus display.)
Don Parker
Just the name “succulent” makes me think of something juicy. Indeed, plants in this class are full of fluid—plant juices, if you will. Their leaf structures and stems are swollen with liquid, hoarded against the frequent droughts they would face in their native territory. Their skins are tough, waxy, hairy, or thorny—all mechanisms to reduce water loss from evaporation. Succulents are the camels of the plant world.

For the garden railroad, succulents are essential to any area you would want to look like a desert but their use does not have to be limited exclusively to arid landscapes. Many small succulents can look quite at home as groundcovers or specimen plants in a variety of garden-railroad settings. In this column, I’ll describe a selection of succulent plants that I’ve used or seen used, and others I would consider to be good candidates for garden railroads.

Ice plants prefer full sun but can tolerate some light shade. They like well-draining soils that are low in nutrients, such as sandy or gravelly soils. Like most succulents, ice plants do not tolerate wet soil. In fact, wet soil, especially during the winter months, is likely to kill the plants.

Stonecrops
The smaller, creeping stonecrops (Sedum spp.) are easy of culture, which makes them a frequent choice for groundcover in garden railroads. Most stonecrops grow in Zones 3-9, are tolerant of heat and drought, forgiving of neglect, and long-lived. Again, wet roots are their enemy.

Some stonecrops have attractive flowers that appear in mid-summer, such as Sedum acer ‘Aureum’, with yellow flowers (photo 2), and S. spurium ‘Dragon’s Blood’, with red blooms. Stonecrops tend to spread, rooting as they go, so are best used where there is room to spread out. The exception may be miniature stonecrop, S. requienii. This variety has pinhead-size leaves and grows very slowly (photo 3).

Some stonecrops are grown for their interesting foliage, such as tricolor sedum (S. spurium ‘Tricolor’, Zones 4-9). It grows 3-4″ tall, with striking, variegated green leaves edged with pink and creamy-white (photo 4). It blooms soft pink in mid-summer and the foliage turns a rosy-pink in the winter, giving lots of color to the garden in all seasons. A smaller colorful sedum with less tendency for wanderlust is dwarf Spanish sedum (S. hispanicum minus ‘Pink Form’ or S.h.m. ‘Frosted Blue’, Zones 5-10), growing 1-2″ tall (photo 5). Its tiny leaves are blue, tipped with pink, and it blooms with pink and white flowers in mid-summer. It looks right at home nestled among rocks.

House leeks
Also known as hen-and-chicks (Sempervivum spp.), this genus of succulents is especially tough and tolerant of neglect. They can be grown as very dense groundcover in dry sites where other plants would languish. Many species of house leeks are cold hardy in Zones 3-8. Small varieties make great miniature cabbages in garden plots (photo 6). Small offshoots (the “chicks”) can be easily picked off the parent plant (photo 7) and pushed into sandy soil with almost 100% certainty of growing. I have planted tiny starts in small ceramic pots that my wife makes for the farm-and-garden store in my railroad.

Cactuses
Cactuses (or cacti, if you like) are succulents, but spines are not what sets them apart. Some non-cactus succulents have spines and some cactuses do not. I won’t get into that botanical detail, except to say, use common sense when handling the spiny ones. Cactuses come in all sizes, with the iconic western saguaro cactus growing up to 70′ tall. If you want that western look in your garden railroad, there are miniature cacti that fit the bill splendidly. Some of these are slow growing and will never exceed 6-7″ tall. Examples can be found in the genera Mammilaria (photo 8) and Echinopsis (photo 9). A spiny non-cactus succulent, Euphorbia aeruginosa, also makes a great replica of the western saguaro. It grows slowly to 6-12″ high, with a dark green, upright stem that branches like the saguaro. It requires sandy, well-draining soil and infrequent watering when the soil is dry.

Many of these cacti will flower, but not reliably and not for very long. If you want a cactus with long-lasting color, grow a ruby ball cactus (Gymnocalycium mihanovichii ‘Hibotan’, Zones 9-11—photo 10). This unusual cactus is produced by grafting a red cactus (which has no chlorophyll to keep it growing) onto a green cactus that supplies the graft with nutrients. The arrangement works for several years but the graft eventually dies.

All these cacti are desert plants and hardy outdoors only in the southern-most tier of states in the US. Winter-hardy cacti are available but tend to be a bit large for the scale of our railroads. However, most of the desert cacti are easy to overwinter inside and can be lifted from the garden in the fall and kept indoors in a sunny window. To make it even easier, plant the pot containing the cactus outside; then all you need to do before frost in the fall is pull the pot out of the ground and take the plant indoors.

You can buy miniature cacti cheaply from Amazon at nine for $17 (or 20 for $29 from Etsy). These usually come without identification tags and are the result of hybridization and mass production for the popular market. Their botanical heritage doesn’t matter as long as you like how they look and they grow well for you.