Home / How To / Gardening / Mulch in the garden railroad

Types of mulch and reasons to use them 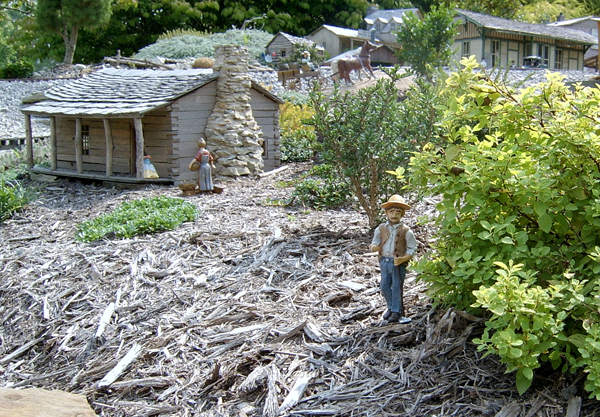 Photo 1
Shredded hardwood bark mulch, bleached by the sun, provides soil cover in an area that will be full of groundcover plants in time. Note that the mulch has been pulled away from the tree trunk behind the figure.
Don Parker 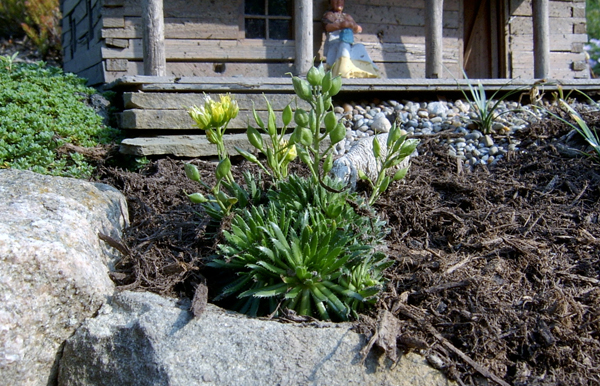 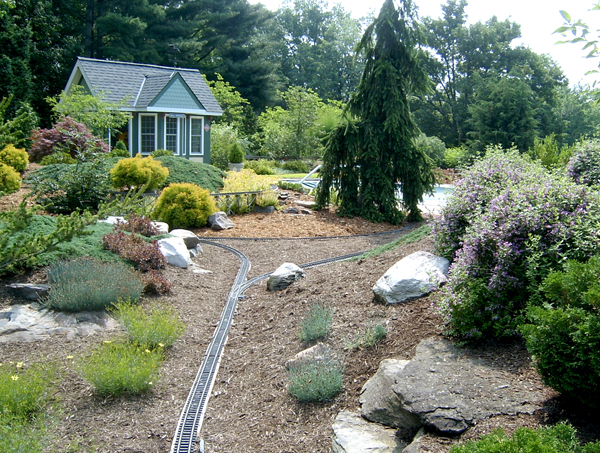 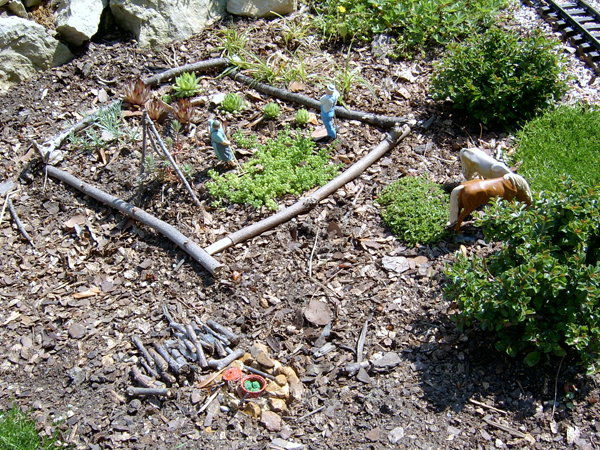 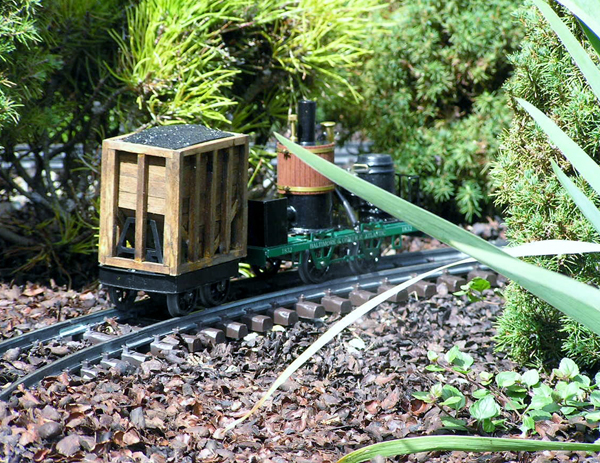 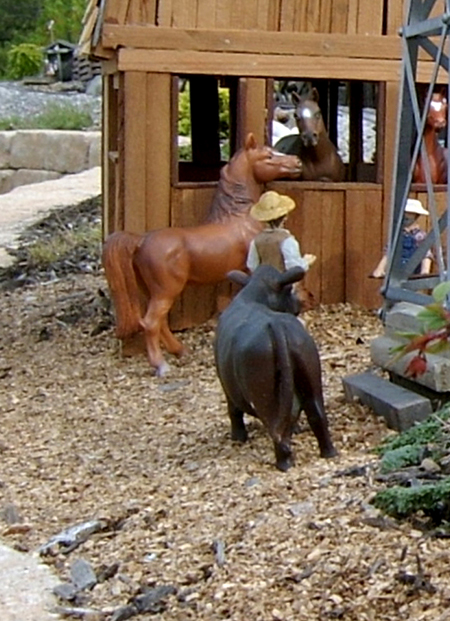 Photo 7
Coarse sawdust on the far side of the double tracks is in a relatively small area and does not get easily washed away by rain. The area on the near side of the tracks shows how shredded hardwood bark mulch is mixed with sawdust to help hold it in place on a slope.
Don Parker 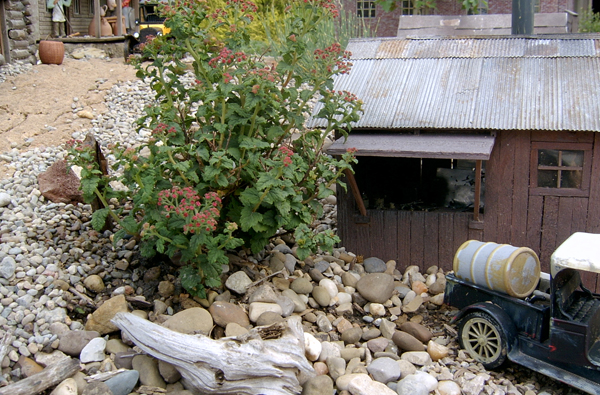 Photo 8
A variety of small pebbles (pea gravel and small river rock) is used to create a scene of rocky ground around plants.
Don Parker 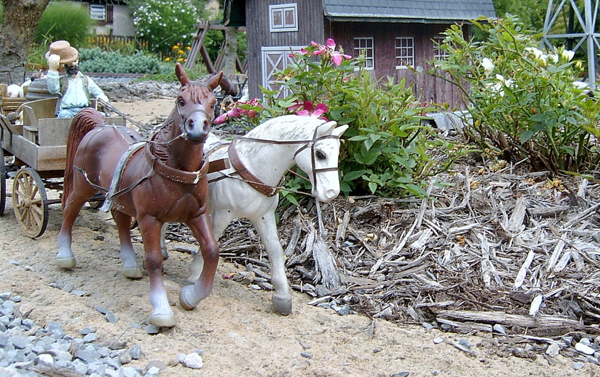 Photo 9
Sand mixed with acrylic concrete bonder was used to create the country road in this photo.
Don Parker
A lecturer once told our Master Gardener group, “Mulch is like underwear: we need it, but we don’t want to see it.” Ideally, the ground is best covered with plants, but it takes time for small starts of groundcover plants to spread and fill the areas we want. If the soil is left bare between the starts, weeds will certainly move in and that will mean a lot more work until the groundcover takes over. Temporarily covering bare soil is one good use of mulch, and there are other benefits. I’ll cover some of these in this article and talk about varieties of mulch and their advantages.

By organic mulch, I mean plant derived. Mulches of this type will break down and add humus to the soil, enriching it. These mulches include bark chips or shredded bark, shredded hardwood, coarse sawdust, cocoa-bean shells, straw, shredded leaves, pine straw (needles), unfinished compost, and others. All of these decompose, enhancing soil texture, and some add nutrients to the soil. Organic matter helps the soil to conserve water, yet drain better; it attracts soil microbes, especially fungi, that interact with plant roots to make nutrients more available to the plant; it moderates soil pH (making more acid and more alkaline soils shift toward neutral)—all factors that foster more vigorous and healthy plants.

Inorganic mulches are usually fine gravels and small pebbles. Sand can be used in limited applications. I do not advise the use of artificial groundcover, such as weed-barrier cloth.

There are trade-offs with organic mulches, and the positive qualities need to be balanced with the negative. Coarser, tougher materials (shredded bark and recycled hardwood) break down more slowly and last longer, which is useful if you are looking for durability. Shredded hardwood bark is the better choice, as bark adds nutrients to the soil. Shredded hardwood (often dyed, ground up, discarded lumber, such as pallets) is not recommended, as it will rob the soil of nitrogen. Garden compost that is still unfinished breaks down more rapidly than hardwood bark, enriching the soil but not lasting as long for soil covering. Pine straw, while it is long lasting, is available commercially only in some areas of the county; of course, you can collect it yourself under pine trees. Cocoa-bean hulls are more expensive and harder to find.

Inorganic mulches do not break down to enrich the soil. On the positive side, they can be decorative, as with colorful pebbles. Stones can be used to create micro-climates, warming sunny areas for heat-loving plants. At the same time, thicker layers of gravel will help keep the soil cool. Artificial ground coverings, such as landscape cloth or weed barrier, not only impoverish the soil, but do not prevent weeds that sprout from seeds on top of them. The fabric becomes tangled in the roots of plants and is difficult to remove without causing a lot of problems.

Many of these mulches are too coarse to use in our garden railroads, but I’ll highlight several that will work well.

Double- or triple-ground hardwood bark that has been conditioned (aged) is very useful as a cover for exposed soil around new starts of groundcover and trunks of trees and shrubs (photos 1 and 2). Make sure none of the mulch is piled against stems or trunks, as this can invite fungal diseases. Large areas of mulch can be used as permanent groundcover where the desired effect is not a lot of plants, but wide open spaces (photo 3).

Small bark chips can be similarly used to provide a surface cover in areas where you want to reduce weed growth (photo 4). Fine bark chips make a uniform cover and are slow to break down. Most bark chips take one or two seasons to disintegrate. The most durable are cedar bark chips, which may last for three or four seasons, depending on how large the chips are.

Cocoa-bean hulls or shells are also long lasting, making a neat, even mulch cover (photo 5)—and they smell nice. However, the tantalizing aroma lasts only a few weeks. After some sunny days and maybe some rain, the hulls will begin to bleach out and lose their scent. One cautionary note: there are reports that dogs can be poisoned by eating the hulls. Apparently, there’s enough of the theobromine produced by the cacao plant in the hulls to be toxic to dogs (and cats). This is the same substance that is present in refined chocolate, but at a lower concentration. There has been only one substantiated canine death reported, but veterinarians continue to warn dog owners of the possibility.

Coarse sawdust is even more fine and uniform (photos 6 and 7). Its drawback is that it is light and can be washed away in a heavy rain, especially if on a slope. It is also raw and, unless composted and aged for a season, will rob the soil of nitrogen.

Fine, rounded gravels work well and look great as topdressing in the garden railroad (photo 8). These may be sold as pea gravel (pea size) or finer size (sometimes used by road crews, much like sand, on icy roads). Decorative small pebbles are often available in pet stores for use in aquariums. A mix of different size pebbles in the landscape gives a more natural effect.

Sand can be used but washes away so easily it needs a bonder to hold it in place. I use sand mixed with an acrylic concrete bonder (Acryl 60 by Thoro) to make my unpaved roads (photos 8 and 9).