Keep your trees small by using these techniques 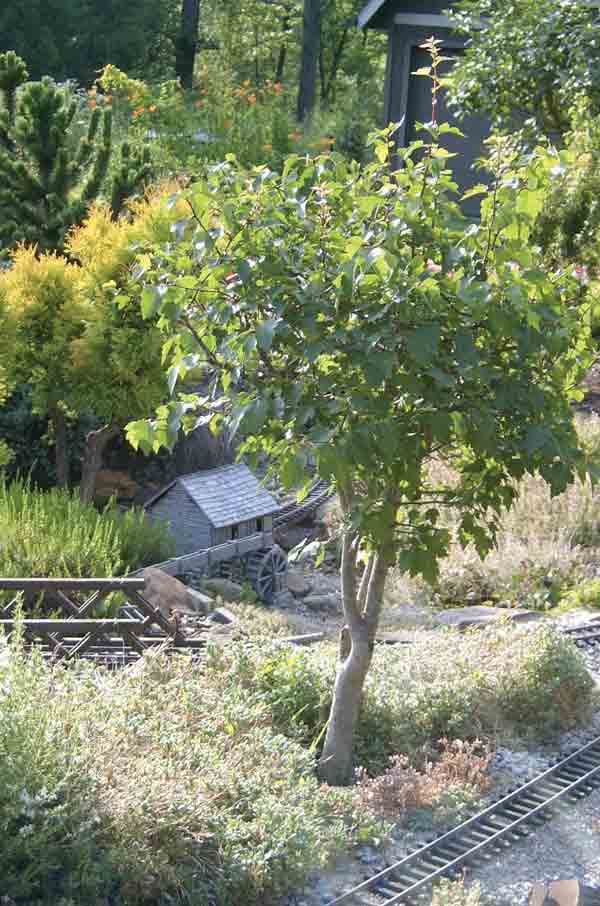 A mature Washington hawthorn tree (nine years old), miniaturized and growing in a pot, sunk in the ground on the author’s Rustin and Decrepit Railroad.
Don Parker 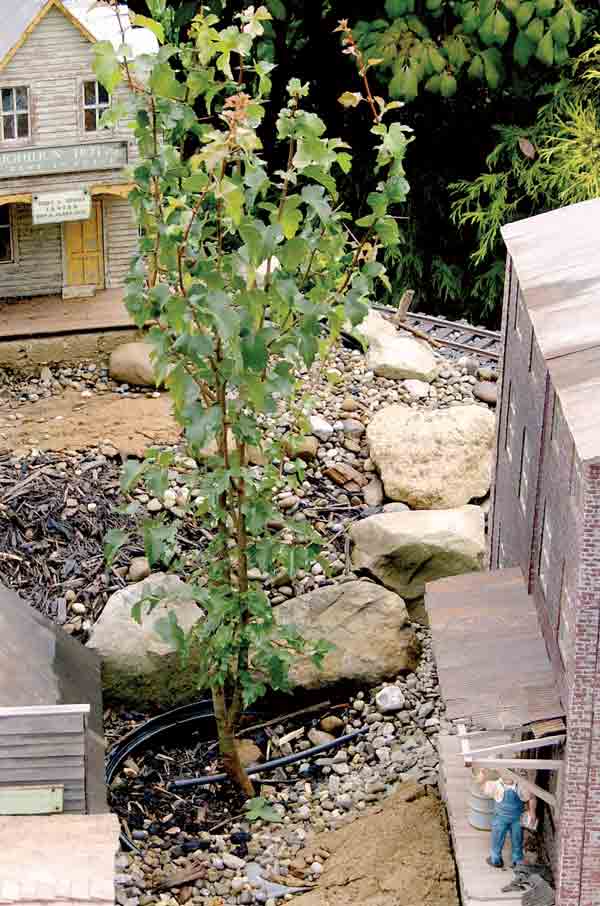 A young hawthorn tree in its first year of pot confinement. The back edge of the plastic pot is exposed and the drip-irrigation line can be seen. These are usually covered with gravel mulch.
Don Parker 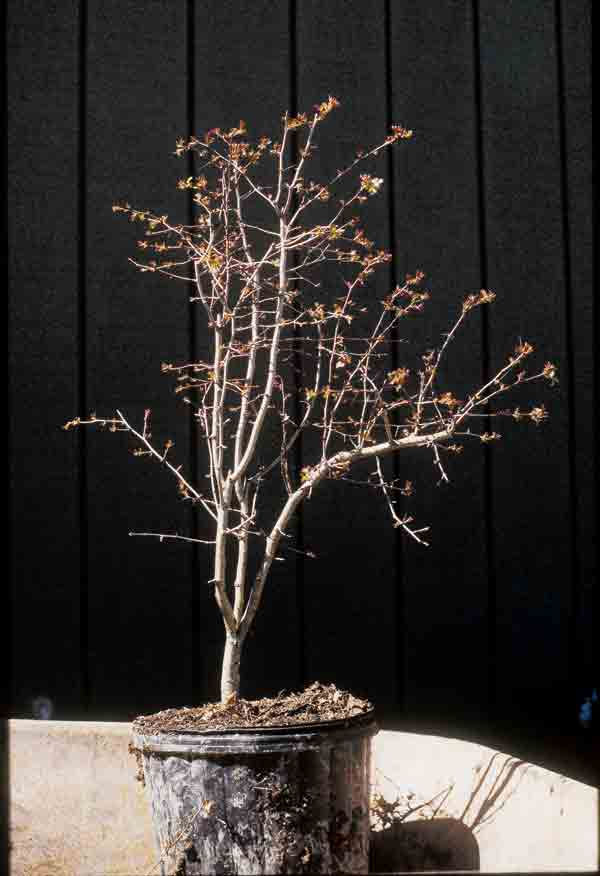 A 3-4-year-old hawthorn tree, leaves just starting to break from their buds, growing in its pot. The pot has been pulled from the ground, before the tree was pruned.
Don Parker 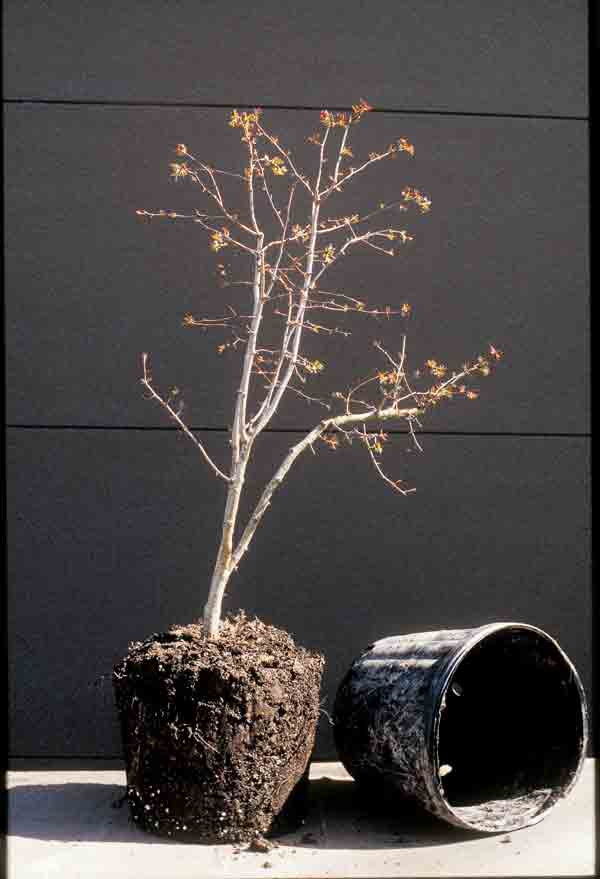 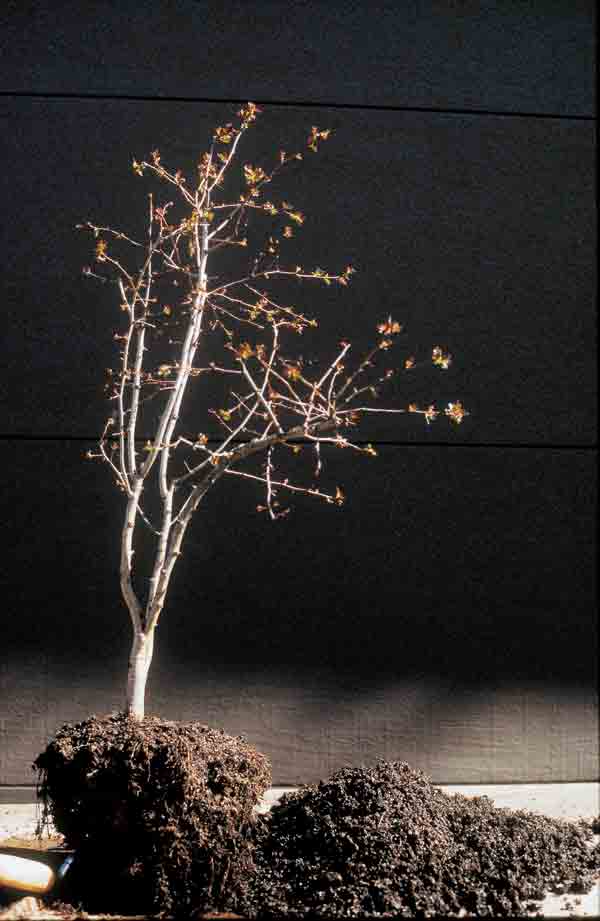 The same tree with a third of its root ball cut off.
Don Parker
Bonsai is an ancient horticultural practice that has been developed into an art form. Years can be spent studying and perfecting it. I doubt there are many garden railroaders with the time or inclination to get into true bonsai culture. Fortunately, there are some shortcut (and likely unorthodox) methods to make miniature trees with less time and effort. I’ll share my experience over the last eight years with one variety of tree, the Washington hawthorn (Crataegus phaenopyrum).

I chose the Washington hawthorn because of its small leaf size (1-2″), hardiness, and availability. It is hardy in Zones 5-10 and is an adaptable and durable specimen. Typically, this native-southeast-US tree can grow to about 30′ tall. Small, white blossoms appear in the summer, followed by vivid red fruit and orange-red foliage in the fall. Unfortunately, it also sports wicked 1″ thorns. From personal experience, I would recommend wearing tough gloves when working with it.

I currently have three hawthorns that are 8-9 years old and measure 2 1/2 feet (or about 60 scale feet) tall. Two more are in earlier stages of the process. All of these are growing in plain, two gallon, black plastic, nursery pots.

The technique I use for miniaturizing is derived from modern bonsai practice. It involves root restriction, root pruning, selective branch pruning, and optional leaf pruning. None of this is difficult and requires only about 30-40 minutes of work per tree per year (plus a few minutes of touch-up pruning occasionally during the growing season).

Quite a number of woody plants are considered suitable for bonsai. Examples of hardy plants for outdoors include (besides hawthorn): arborvitae, azalea, boxwood, cotoneaster, elm, hemlock, juniper, maple, pine, spruce, and zelkova. I wanted to use deciduous trees, since their naturally occurring miniature forms are so rare. In contrast, quite a few tiny conifers are available in the trade. Because my Rustin & Decrepit Shortline represents an Appalachian foothills railroad, I wanted more deciduous trees than conifers. This could be reversed for western-area railroads.

To produce a realistic illusion of a mature tree, the species you select should have these characteristics: small leaves or needles; short internodes (distances between leaves); attractive bark; and branching patterns for good twig forms, which will give it fullness as opposed to a straggly “Charlie Brown” tree.

My hawthorns came to me as tiny, dormant whips from the National Arbor Day Foundation. This size tree may also be available from your county extension office or from some mail-order nurseries. Most retail tree nurseries sell much larger specimens not suitable for miniaturizing. I planted my little trees in a fenced-off area of my vegetable garden, where they were left to grow for two years. During this time I pruned out most of the smaller branches that developed, leaving two to three larger ones that would give the trees their basic shape.

In mid to late March of their second year, I dug around each tree and carefully moved the root ball into a two-gallon pot, filling in any air space with good garden soil, and soaking the whole pot in a tub of water for a few minutes. The tops were more carefully pruned to give each tree its final major shaping, and the pots were sunk in the ground and mulched to keep the roots cool during the summer. These young trees can be placed in the railroad garden at this time or kept in your “tree nursery” for another year until they look a little more mature.

The following March, as trees broke dormancy here, I dug up the pots and did selective branch pruning, cutting off weak or crossing branches and giving the tree some open areas to show the branching pattern, shaping it into a more natural-looking mature form. I then removed each tree from its pot and cut off the lower third of the root ball—soil, roots, and all. This can be done with an old butcher knife or a hacksaw if the roots are heavy. The pot was then lined with landscape cloth (more about this later) and the lower third of the pot was filled with a recommended bonsai soil mix 1/3 clay, 1/3 humus (leaf compost, sphagnum peat moss, etc.), and 1/3 coarse sand or the finest chicken grit. A ready source of clay that is easy to handle is Oil-Dry, a dry, pelletized clay product found in hardware and automotive supply stores.

The shortened root ball was placed back in the partially filled pot, any open spaces filled with the soil mix, and the whole pot soaked in a tub of water for a few minutes to drive out all remaining air pockets. At this stage the trees are ready to claim their permanent spot in your railroad landscape. And that’s basically it. Nothing fancy. Just make it a rite of spring by putting this chore on your calendar. I do it when it’s too early to run trains and before the big spring rush of garden work begins.

Plastic nursery pots have several holes in the bottom for drainage. When I dug my trees up in March, after the first year they were in their pots, I discovered that they had sizable roots growing through the drainage holes and spreading out into the surrounding soil. The only way I’ve found to effectively contain this unrelenting root expansion is to line the inside of the pots with a double layer of plastic landscape fabric (weed block). I use the first layer to line the entire inside of the pot and put a second layer in the bottom, making the double coverage in the area of the holes. A caution here: don’t try to line the pot with solid plastic sheeting. The trees need drainage or they will drown.

This technique works because a tree must maintain a balance between its leaf mass and its root mass. The trunk and main branches of a potted tree will very slowly enlarge, giving the specimen that “old,” established-tree look. But the total number of leaves will be limited by the total number of roots and the tree won’t grow any bigger, as long as the root mass is contained.

Roots imprisoned in a plastic pot, sealed off from surrounding ground moisture, dry out more quickly than the same size root ball in open soil. Potted trees should be watered at least every third day unless there has been a heavy rain. Covering the soil in the pot with 2″ of mulch helps a little (and hides the edges of the pot). I use a drip irrigation system to keep my trees happy. Drooping leaves are an early sign of water need. If the leaves develop brown, crispy edges, you’ve waited too long. But even after a significant leaf drop in mid-summer when I was on vacation (before I put in drip irrigation), these tough little trees recovered after several weeks of good watering. They are very forgiving.

Since the amount of soil in the pots is limited, trees need to be fertilized on a regular basis. I use soluble plant food for acid-loving plants (such as Miracid or other brand), mixed in water at half the recommended strength, every four weeks. I pour about a cupful in the pots of younger trees and about two cupfuls for older trees. Stop fertilizing woody plants after the first of August, so as not to stimulate new growth that could be damaged by an early frost.

To make the leaves on my Washington hawthorns even smaller, I have, on occasion, leaf-pruned them. This involves trimming off all the leaves on half of the tree, allowing new leaves to appear before leaf trimming the other half. The leaves that develop from this procedure are usually smaller than those first produced in the spring. I would only do this for special occasions (such as an important tour) or for a specimen tree at front and center