Home / How To / Gardening / A gallery of miniature conifers

Choose which ones fit your garden railway best 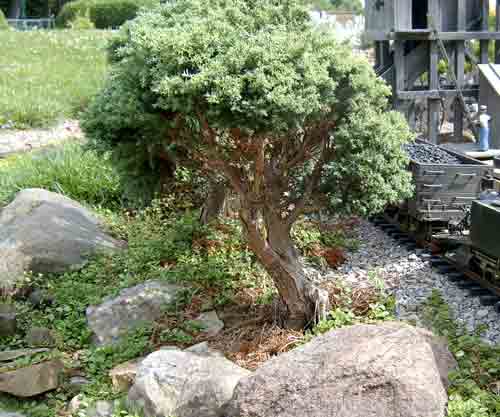 Two ten-year-old sawara false cypress trees grow along the siding to the Itzall Mine.
Don Parker 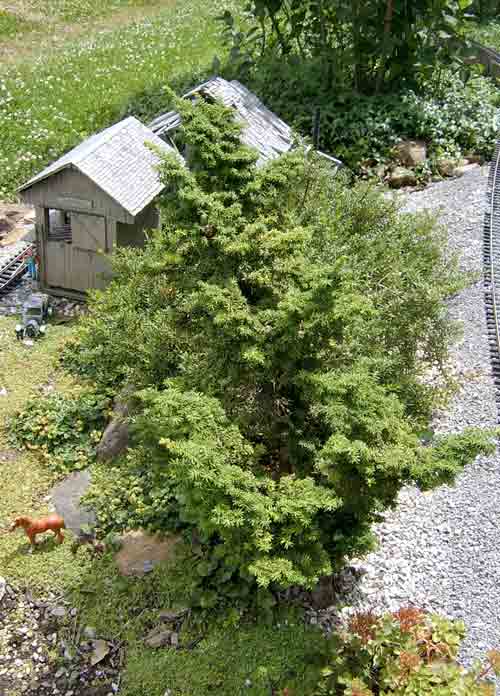 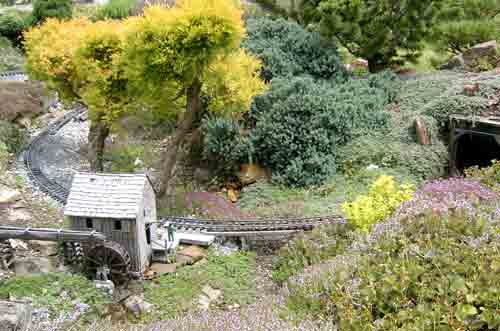 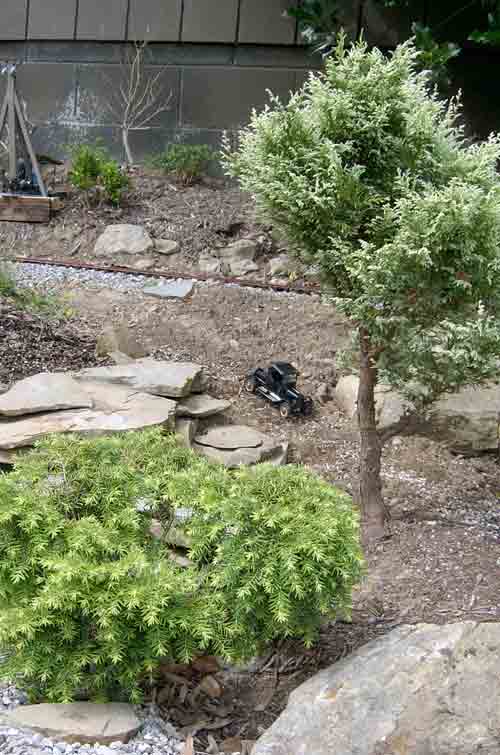 On the right is a Snow false cypress pruned into a tree form. To its left is a Jeddeloh dwarf Canadian hemlock.
Don Parker 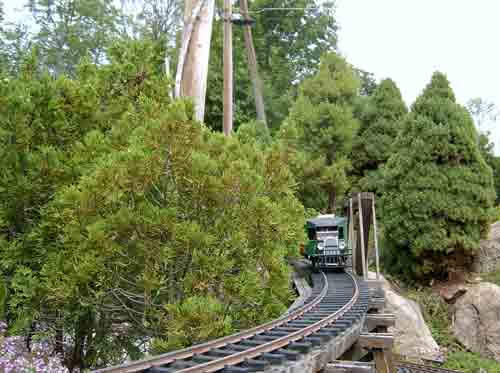 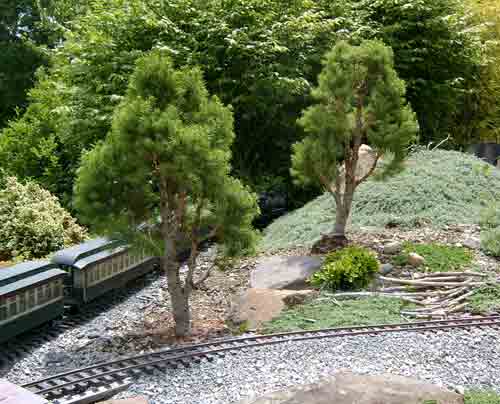 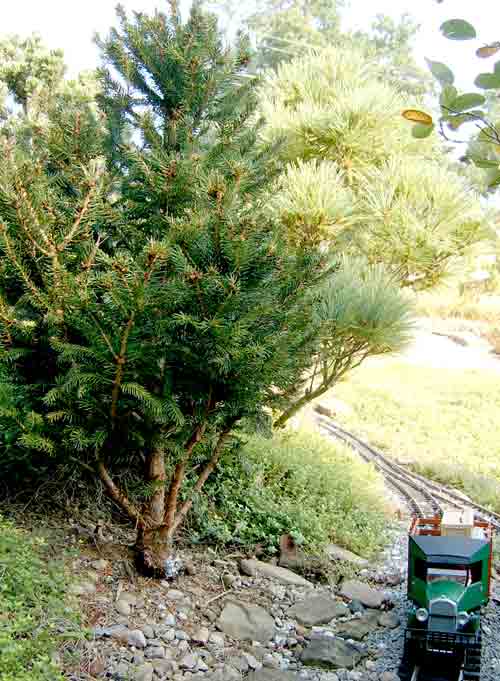 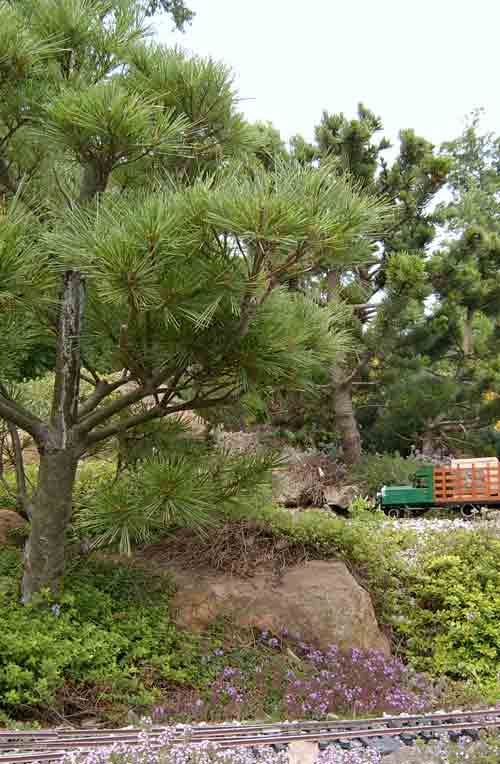 In the foreground is a dwarf white pine; the dark-green trees behind that are bristle-cone pines. All are about 14 years old and pruned by pinching new growth.
Don Parker 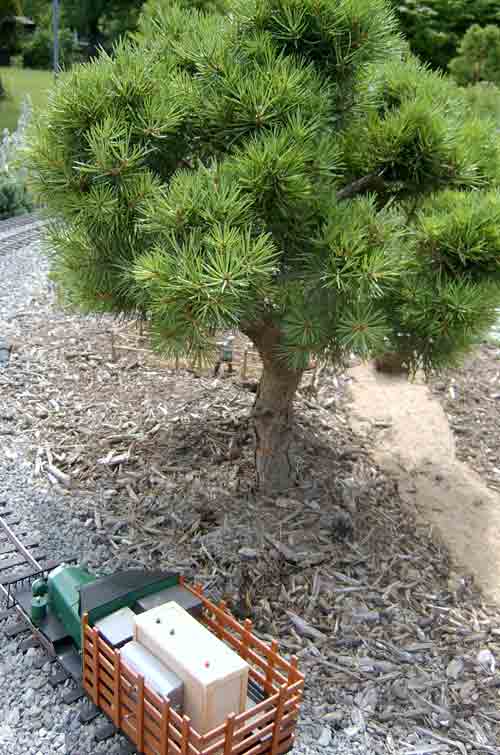 An eight-year-old dwarf Scotch pine that has been pruned only by pinching new growth each spring.
Don Parker 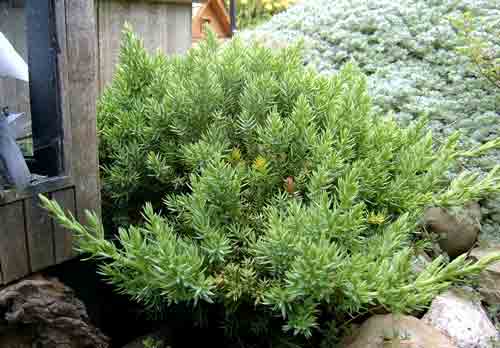 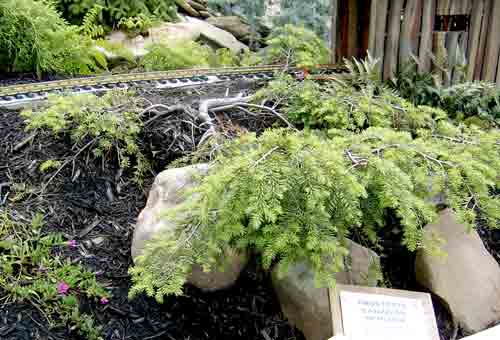 A Cole’s prostrate hemlock in a temporary garden railway at Holden Arboretum, Willoughby, Ohio.
Don Parker
Nothing gives a sense of scale and believability to a garden railway quite as well as miniature trees. When it comes to really small trees that translate well to our railroad landscapes, conifers (cone bearing, needled evergreens) seem to have the most representatives in the miniature woody-plant kingdom. I will highlight some common and less-than-common conifers that I feel deserve a place in any railroad garden.

One of my favorites is sawara false cypress (Chamaecyparis pisifera ‘Squarrosa Intermedia,’ Zones 4-8). Growing less than an inch a year, sawara false cypress has extremely small, scaly needles barely 1/4″ long. It naturally forms a ball of blue-green foliage on a trunk with craggy, fissured, brown bark. Minimal pruning every 2-3 years will produce fantastic little trees that look perfectly in scale and that seem decades older than they are.

Another false cypress that grows twice as fast as sawara but has wonderfully white-tipped foliage is Chamaecyparis pisifera ‘Snow’ (Zones 4-8). Pruned or unpruned it will create a bright spot in the landscape and will grow in both part shade and sun.

Another naturally small conifer in the same genus is Little Jamie eastern white cedar (Chamaecyparis thyoides ‘Little Jamie,’ Zones 4- or 5-9). This tiny sport of eastern white cedar forms a perfect miniature cone-shaped tree that tops out at 2-3 feet when fully mature. It has bright green, scale-like needles less than 1/2″ long and tiny green cones that hang in the upper part of the tree. It never needs pruning except to keep longer, lower branches away from track or structures.

Arguably the most commonly used conifer in garden railroads in North America is the Alberta spruce. There are various small forms, the most available being dwarf Alberta spruce (Picea glauca ‘Conica,’ Zones 2-6). The slowest-growing cultivar I’m aware of is Jean’s Dilly, pronounced “Jon’s Dilly” (Picea glauca ‘Jean’s Dilly,’ Zones 4-8). The needle clumps of this tree are half the size of dwarf Alberta spruce and its eventual mature size is 4 feet tall by 11/2 feet wide, compared to up to 8 by 3 feet for ‘Conica’ after 20 years. Dwarf Alberta spruce needs regular pruning to maintain its scale-related appearance, whereas Jean’s Dilly needs minimal (if any) pruning. Another useful spruce is pygmy Norway spruce (Picea abies mucronata, Zones 3-8) which reaches 3 feet tall in 10 years.

Although some folks call all conifers “pine trees,” only those trees in the genus Pinus are true pines. The pine closest to scale would be dwarf Mugo pine (Pinus mugo ‘Valley Cushion,’ Zones 2-7) growing to 12″ by 15″ in 10 years. Other useful small pines could include dwarf white pines (Pinus strobus ‘Nana’ and ‘Umbraculifera,’ Zones 3- or 4-7), and dwarf Scotch pine (Pinus sylvestris ‘Beauvronensis,’ Zones 4-7), all of these staying under three feet in 10 years. There are other pines that will grow out of scale to the railroad but are worth considering because of their intrinsic beauty. One of these is bristle-cone pine (Pinus aristata ‘Engelm,’ Zones 4-7), which is so slow growing that a ten-year-old tree is less than 3 feet tall-and after a couple centuries maybe 20 feet tall (or you can wait a couple thousand years to see a really mature bristlecone pine!). The needles are about 1″ long, dark green with a patina of whitish, waxy coating. Like all pines, these trees can be kept closer to scale with yearly pinching of the new growth (called “candles”). (For more on pinching, and other tips on controlling tree growth rates, see “Miniscaping” in the June 2007 GR.)

There are many small sports of hemlocks (Tsuga spp.), some having redeeming value for the railway garden. Lewis’ hemlock (T. canadensis ‘Lewisii,’ Zones 3-8) has a natural, irregular, windswept look. With needles 3/8″ long and small brown cones, it grows very slowly, maturing at about 2 feet tall. Jeddeloh hemlock (T. canadensis ‘Jeddeloh,’ Zones 3-7) grows up to five feet tall but slowly enough for judicious pruning to control its size. It has a wonderfully cascading habit that will make it stand out in the garden. Other hemlocks to consider could include prostrate forms: e.g., T. canadensis ‘Cole’s Prostrate’ (Zones 4-8), growing 3-6″ tall by two feet across.

Some conifers have distinguishing colors that add interest and brightness to the garden. Besides the blue forms, there are those with yellow-, bronze-, and purplish-tinted foliage. I enjoy the yellow-turning-to-bronze of Rheingold arborvitae (Thuja occidentalis ‘Rheingold,’ Zones 2-7), although the heavy pruning it requires is a bit of a chore.

These are but a few of the many small conifers available today. Do a little research and try a variety of these trees. Expect it to take a few years for them to reach the best size (unless you pay extra for more mature plants). Gardening can be a long-term commitment when it comes to trees, but there’s great satisfaction in seeing a well-placed tree slowly mature into a beauty.