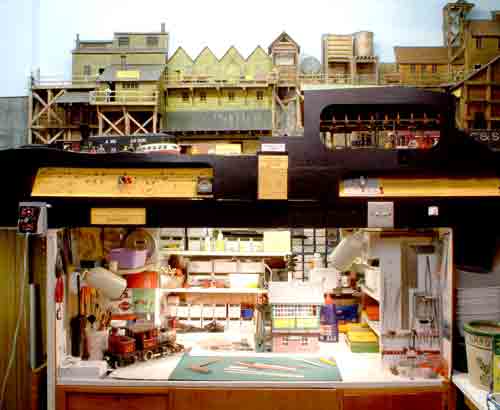 1. With a track height of 60″ there is ample room below the layout for storage and the all important work benches, located here below the mines at Orla.
Mike Garforth 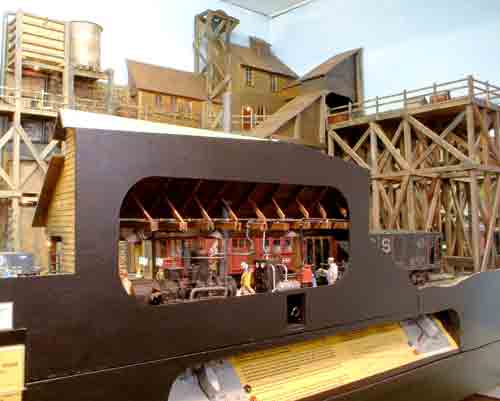 3. The front of the layout at the Orla Mine area. The open-fronted boiler house offers one of several “viewing windows” into the layout. Under the boiler house, set into the fascia, is the control panel for the mine tramway and the pit head winding gear, along with a plan of the Orla Mine yard and a brief explanation of the various buildings within the mines.
Mike Garforth 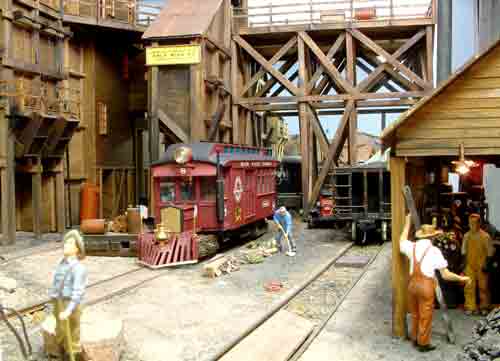 2. Looking along the tracks in front of the boiler house toward the end of the Orla Mine Yard. The hills seen through the supporting framework are, in fact, those to the rear of the engine service facilities, reflected in a mirror that stretches full width across the end of the layout. The railcar was kitbashed from a Bachmann combine, a USA Trains NW2 power truck, and bits of scrap materials.
Mike Garforth 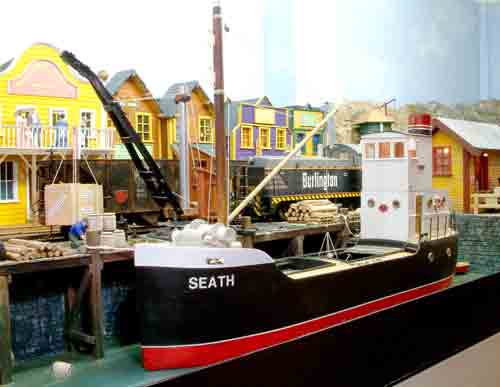 5. The S.S. Seath, a scratchbuilt steamer based on a Clyde Puffer, rests alongside the jetty at Furnace. The visual impact of this old town is enhanced by the sounds from a Fantasonics Scale Magic CD of a “Quaint Fishing Harbor.” Speakers are hidden within the warehouse and the saloon.
Mike Garforth 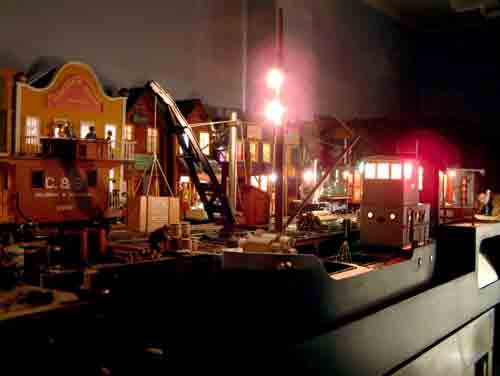 6. A night scene at Furnace. All the buildings, and the S.S. Seath, are fully lit to permit nighttime operations. Red lights within the layout room permit safe movement for operators and reading of train orders etc., without distracting from the night effect.
Mike Garforth
Some 15 years ago, having modeled in N scale for 20 years or so, I decided it was time to consider my long-term needs in terms of railroad modeling. I realized that if I was going to make a change that would see me through the next 20 to 30 or so years, (I was 50+ at the time), I should look to the larger scales. I considered them all but finally opted for 1:24 scale.

Like my N-scale layouts, the Seath Valley Railroad was built on the idea that it was a “heritage railroad,” a line that had fallen on hard times and had been rescued by volunteers determined to restore it to its original glory, using locomotives and rolling stock from whatever source was available, including the scrap yard, other closing railroads, and items donated by supportive railroads enjoying a more prosperous existence. The Seath was to be a huge, living museum, preserving the best of North American railroading while keeping the Seath Valley alive and
generating industrial jobs and growth. As the publicity for the railroad states, “Preserving American heritage for the future.”

Thus, the railroad does not represent a specific time period, though the Seath Valley volunteers do tend to dress in period costume and drive a wide range of road vehicles in their supportive roles within the towns and activities close to the railroad, where visitors are most likely to get caught up in the spirit of the enterprise.

At the time I decided to change my modeling scale, large scale was still in a fairly early stage of development, with not too wide a selection of stock or material. My initial decision was to model in 1:24 scale (1/2″ to the foot) and thus LGB stock, at 1:22.5, was near enough. I intended to build all my own structures and rolling stock but use off-the-shelf locomotives, a decision I have stayed with.

My wife Lynda and I have a small motor home that will not fit into our attached 30′ x 8′ garage. So, a little negotiation ensured I could build what would essentially be a large shelf layout in the garage.

The space was already divided into two areas: the larger was home to the family freezers and other domestic equipment while the area to the rear of the garage was a fairly comfortable room that had housed the piano the children used when they were younger.

The height of the layout was determined by the need to clear the lid of the chest freezer (which shared the space) when it was open, so a track level of 60″ resulted. This offered an ideal operating height with the facility to really eyeball trains in operation. It also enabled me to build my modeling bench underneath in the rear room. Visiting operators and friends who are not as tall as I either have to stand on a small raised platform or view the layout from a lower perspective.

Photo 1 shows the bench area under the layout in the rear room. The shelves behind and under the turntable are used to display locomotives and rolling stock.

The trackplan shows the configuration of the layout, which is actually a large switching layout. An initial requirement was that the layout be transportable to exhibitions. This proved not to be a viable proposition, as described later, but the early decision led to the layout being built on six individual base boards. These are supported on a variety of wooden and metal frameworks.

The baseboards themselves are built on 1″ x 4″ frames, with chipboard tops and softboard track bed. Track is Peco, painted a nice rust color, and all switches are hand thrown from either scale switchstands or pull/push rods activated from the concealed locations on the fascia.

Ballast is scale stone sifted for size and, once spread to the desired contour, held in place with trusty diluted wood glue. The roadbed has been suitably enhanced with weeds, coal and oil stains, and typical debris.

Control is via an Innovative Train Technology (ITT) Control 2000 walkaround throttle with memory and four plug-in points, as shown on the trackplan. There is also a scratchbuilt throttle that can control operations on part of board #4 and also boards #5 and #6. Two engineers can operate together, though this does require close cooperation. The main panel on board #2 contains a change-over switch that isolates the ITT throttle from the tracks covered by the second throttle.

When the second throttle is in use, there is a short section of completely dead track on board #4 between the two throttles to prevent electrical feedback between throttles via locomotive wheels and pickups.

The main control panel, located on board #1, contains section switches for the whole layout, while the subsidiary panels on boards #4 and #5 control only the local sections.

All the structures are scratchbuilt using North Eastern scale lumber on a base of 1/8″ ply, and all contain full interior lighting. Operating a nighttime simulation is an interesting and atmospheric experience.

Mines at Orla are served by an operating 15″-gauge mine tramway that children love to run. Diodes at each end of the track run stop the train before it hits the bumpers. The young engineer simply throws the switch on the control panel and the train heads in the opposite direction. The pit head winding gear is also controlled from the mine panel and a gentle turn on the control knob will either raise or lower the mine cage.

The mine area contains two types of mine. Nº 1, The Long Drift, is, as its name implies, a drift mine with its entrance within the stamp-mill building. Nº 2, The Deep Pit, is a typical shaft mine that seeks out the coal seams deep below ground. There is a tailings hopper adjacent to the drift mine to hold the waste material prior to its shipment out of the mine area.The mine complex generates ample switching opportunities, with track to the tailings hopper, three coal hoppers, a warehouse, engineering workshops, boiler house, diesel tank, and engine-service facilities.

Structures close to the front of the layout have fully detailed interiors and plenty of scale workers going about their daily jobs. Visitors are invited to look closely into the layout and viewing points are provided either through building windows and doors or via cut away, glazed viewing windows in the rear of buildings. The boiler house at the Orla Mine was built as a half building so that the viewer would appear to be actually inside the structure, peering out into the mine yard. There is even a “worms-eye view” through a tube placed at track level in the fascia and through the scenery, looking into the port of Furnace.

In an attempt to involve casual visitors in the philosophy behind the layout, there are information panels on the fascia at Furnace and Orla Mine explaining the salient points of the features modeled and their relationship to the overall concept of a heritage railroad.

Portability
Having reached a stage in detailing the layout to a degree I deemed acceptable for public display, I thought it was time to put one of my initial requirements to the test and build two additional boards to replace boards #3 and #4, which are fixed permanently in place in the garage. These additional boards were intended to permit me to operate the layout away from home.

These two replacement boards were basic in detail, retaining much of the original track configuration while still providing ample viewing opportunities. A team track presented one miniature scene, supported by an information panel on the fascia outlining the function and operation of a team track. The scene featuring Tunnel Autos gave me the opportunity to display a few neat models of classic American automobiles.

The layout was taken to a local NMRA meet and ran well for the two-day event but the experience will not be repeated. I had failed to foresee, in my enthusiasm to display my handiwork, that the layout was just too big! Even with the assistance of two friends, the logistics and muscle power required to move, transport, erect, disassemble, and re-erect at home proved too great. Thus the two new boards were taken apart, the legs removed from the baseboards, and the layout restored to its now permanent location in the garage. All is not lost. I still get to share operations with my grandchildren, friends from the Furness Model Railway Club, and fellow enthusiasts from the G Scale Society, together with any passing railroad buff.

The most recent addition has been the introduction of four Fantasonic Scale Magic sound tracks to the layout. Speakers are concealed in two of the buildings at Furnace and supply the gentle and subtle sounds of “Quaint Fishing Harbor,” while two speakers above Junction play the sounds from “Way Side Station” onto the scene. At Orla, two tracks play through four speakers; two into the engine-service facility play “1800s Roundhouse and Yard,” while “Five Stamp Mill” plays from two of the mine buildings. These sounds add a superb finishing touch to the layout as well as support for the sounds from the Phoenix sound systems in the locomotives. Visitors frequently seem more intrigued with the sound element of the layout than with the visual impact!

The development of an operating sequence has also made me think about the integration of the layout into the wider concept of the Seath Valley Railroad as a whole, which has led me to develop the potential of the fixed transition board (board #4-see trackplan) into “Junction,” a wayside station with hidden (actually nonexistent) links to the remainder of the railroad, where stock is added to or removed from the layout.

After 15 years the layout is virtually complete, though there will always be changes to make, operating sequences to perfect, rolling stock to scratchbuild, and the myriad other activities that make railroad modeling such a superb hobby.