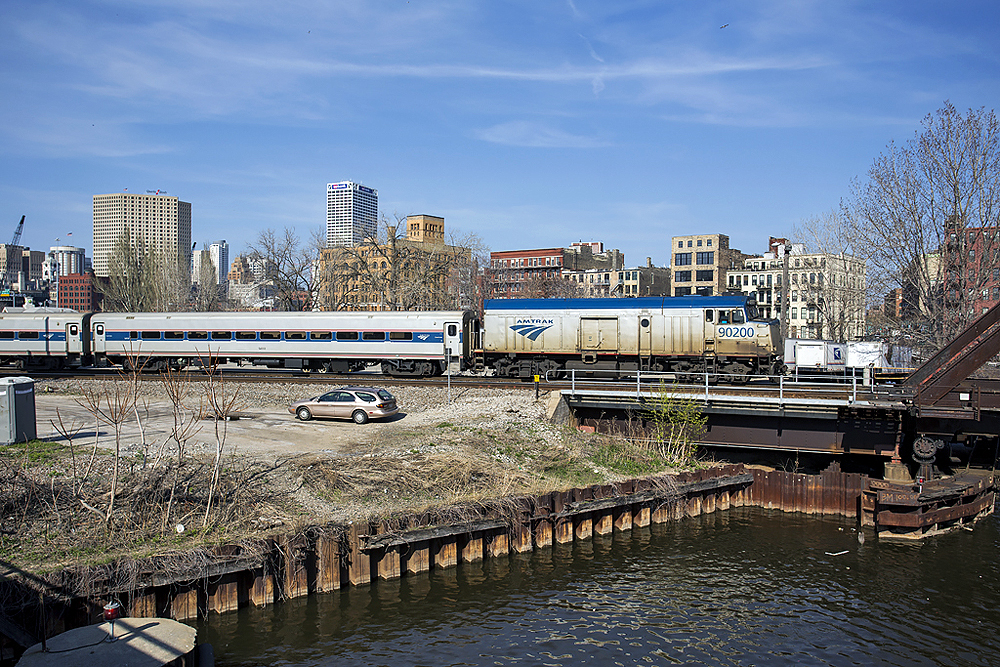 Represented by six Class I railroads, Amtrak, Metra, the South Shore Line, Chicago Transit Authority, and a long-list of short line and regional railroads, the city offers a magnitude of rail focal points and it’s little surprise that access to Chicago’s greatest sights can be enjoyed without the hassle of navigating a vehicle. For those in Milwaukee and northern Illinois, a day trip on Amtrak’s Hiawatha affords great access to downtown Chicago with a number of daily trains that will deliver you back to the Brew City before bedtime.

Originally built by the Milwaukee Road to serve its passenger train of the same name, the then- Milwaukee Union Station replaced the city’s Everett Street facility. Chicago & North Western Railroad passenger trains also used Milwaukee Union Station until the C&NW withdrew its passenger service from the region after the formation of Amtrak. The Milwaukee train station underwent a near-$17 million renovation and re-branding in 2007 and was renamed Milwaukee Intermodal Station. Upgrades included a larger waiting area, glass atrium, additional ticketing facilities for rail and Greyhound bus service, and restaurant and retail space. Today’s station is served by Canadian Pacific’s U.S. subsidiary, the Soo Line, on its C&M Subdivision, appropriately named because of its link between Chicago and Milwaukee.

It’s fair to say that Chicago offers something enjoyable for everyone, even beyond its vast rail history. Milwaukee travelers wanting to see a Chicago Cubs baseball game can gain access to  Wrigley Field by taking the Chicago Transit Authority Red Line onboard the city’s State Street Subway. Subway access is just six blocks east of Chicago Union Station. If onboard Chicago’s subway system, be sure to enjoy a ride on the subway’s Loop, a 1.7-mile circuit of elevated subway circling the city’s downtown core. Five of the CTA’s eight subway lines use Loop tracks today. It is estimated that more than 1.6 million passengers use the CTA each weekday, making it the second largest public transit system in the country.

If you’re looking for a less-crowded history lesson, Metra’s hub-and-spoke service coverage area affords direct rail access to quiet suburban neighborhoods where rail enthusiasts can enjoy a relaxing morning or afternoon enjoying a cup of coffee and watching a mix of freight and passenger trains. The author’s personal favorite is a ride out to Downers Grove on Metra’s BNSF line. Late evenings are particularly crowded with rush-hour commuter trains departing from Chicago, however if you arrive early enough in the afternoon one can enjoy both freight and passenger trains. BNSF Railway Z-train intermodals and a mixed bag of other carload and unit train traffic can be safely enjoyed from downtown Downers Grove, Naperville, or Aurora. Plan your visit to the suburbs accordingly as not to miss your northbound Hiawatha to Milwaukee.

If you’re in a hurry in Milwaukee and need your breakfast, Aladdin’s All Aboard Cafe serves mostly a commuter crowd with simple prepared foods, hot sandwiches, and coffee in the station. If you have a little more time, or depart on a weekend, try the Stone Creek Coffee just a half a block north. Enjoy their fireplace, especially on a cold winter day.

Which Trains Magazine issue has an article on the Kansas City Southern line from Kansas City to Shreveport, La.?