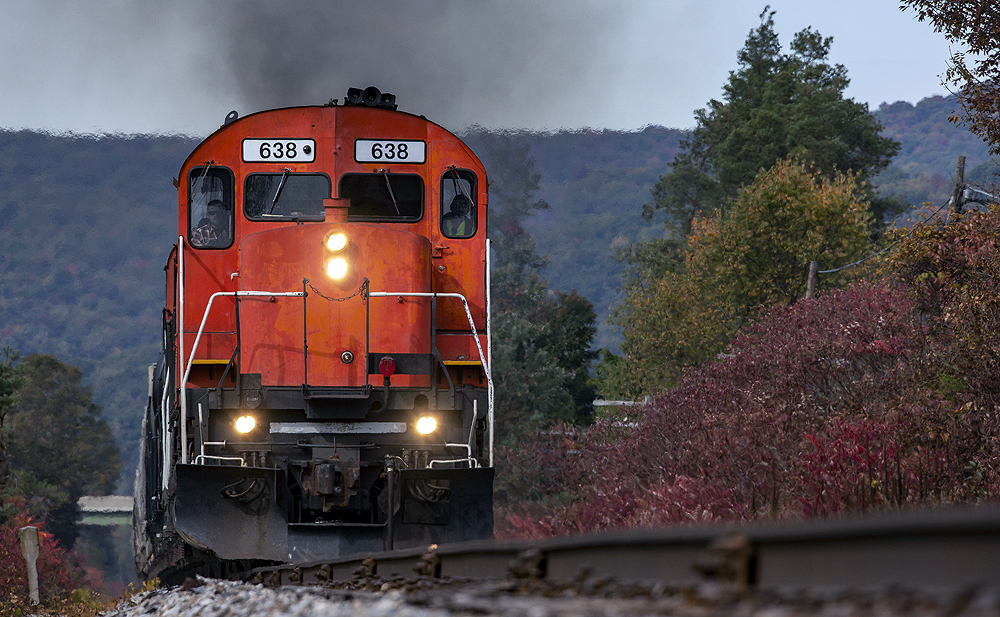 Working mountain Alco locomotives: Nestled in the wide rolling hills on the western edge of New York’s Southern Tier lies the formerly two-railroad town of Olean, N.Y. A quaint, unsuspecting town of 13,000 residents located along the placid Allegheny River was once a railfanning destination, that is — until the formation of Conrail. Dozens of trains daily pounded the downtown diamond at “Olean Tower,” The crossing of the north-south Pennsylvania Railroad Harrisburg-Buffalo “Buffalo Line” and the Erie’s east-west NY-Chicago mainline known as the “Meadville Line,” rapped with the kind of intensity that prudent money might even bet, would never end. But a happy ending was not immediate as Conrail, and then Norfolk Southern, eventually lost its affinity for both of Olean’s mainlines, and years of uncertainty ensued before the formation of today’s modern Western New York & Pennsylvania.

Without much warning and with only a phone number, we rolled into Olean to find the Queen of the WNY&P fleet: C630M No. 630 lead out on a trio of locomotives under the sanding tower. By chance, WNY&P President Carl Belke was in town and after signing releases, allowed us to pull out the lights for the first of several great night photography sessions at the Olean Shops in 2014. William Beecher Jr. photograph

Here's why the 638 is a personal favorite. Eric Bochman plays her like a Stradivarius. She sounds as good as she looks! OL-1 comes east off the B&P Interchange at Carrollton, N.Y., in October 2016. William Beecher Jr. photograph

Conductor Alex Captain looks back, and the Driftwood Turn blasts out of Driftwood in a blaze of glorious exhaust, surrounded by Pennsylvania signaling relics from a past golden age. William Beecher Jr. photograph

It's by no chance that people are what make the railroad hum. Proud Engineer Eric Bochman looks back for another sign from his conductor, Alex Captain, while yarding OL-1 at Olean on a beautiful October day in 2016. William Beecher Jr. photograph

The "Slingshot" WNY&P's Falconer (N.Y.) Turn passes through the west side of Salamanca at a location the railroad calls "Casino" because of its close proximity to the Seneca Nation Indians Casino at Salamanca. William Beecher Jr. photograph

Once the High-speed Erie main line that hosted the likes of UPS hotshots NY-100 and fast freight CX-99 , today finds weekday OL-1 headed back to Olean with interchange from the B&P at Salamanca, N.Y., in October 2016. William Beecher Jr. photograph

Pouring rain was too hard to resist, so out came the umbrella for some static shots off the Eldred, Pa., levy, as a Driftwood Turn picks up a stored set of tank cars for delivery to the NS at Driftwood. William Beecher Jr. photograph

Beltpack equipment on the front porch of C424 No. 421 highlights this day's Olean yard job's power at Olean, Caboose 300 looks on from a yard track. William Beecher Jr. photograph

It’s a full house in the shop building with an M636, RS18U and C424 all sharing space in October 2017. William Beecher Jr. photograph

Ex-Delaware & Hudson/Tioga Central/LA&L RS3m No. 506 shows her fresh paint under the WNY&P herald on the Olean Shops just days after being rolled out of paint. Notice the newer use of LED headlights as one of the more modern upgrades to the old girl, ready to serve the railroad for many years to come in handsome black-and-yellow colors. William Beecher Jr. photograph

The WNY&P is a wholly owned subsidiary of the Livonia Avon & Lakeville Railroad. It started operations in 2001 after the public-private New York Southern Tier Extension Rail Authority acquired the former Erie/Erie-Lackawanna main line from Hornell, N.Y., to Meadville, Pa., and eventually Oil City, Pa., with public funds through leases and public-private purchases. The railroad quickly expanded in 2007 after NS piecemealed the north end to the Buffalo line to both the Buffalo & Pittsburgh and WNY&P. After the deal was done, B&P then enjoyed a new routing north into Buffalo and the WNY&P to the south toward Driftwood, Pa., with Machias, N.Y., becoming the dividing point, 26 miles north of Olean.

Situated at the crossroads of the new system, it was only natural that Olean became the operating heart of the WNY&P’s universe. Conrail had rebuilt the Erie’s Olean yard late in its operation and used it as a focal point to serve online business and interchange to the west. The grounds were improved further when a three-track engine house with inspection pits was constructed with the capacity to hold and work on up to nine locomotives at a time. The table was set for the Big Show about to go down.

It’s no secret what happened next. A fleet of 6-axle ex-Cartier M630s, similar to the C630s, Conrail/New York, Susquehanna & Western C430s and several other acquisitions from Canadian Pacific, Morristown & Erie, Tioga Central, and the Belt Railway of Chicago flooded the railroad with a prized fleet of Alco/Montreal Locomotive Works locomotives like none other, once again making Olean a destination for railfans.

It wasn’t until fall 2014 before I made it over for the first time to Olean, and it quickly became an annual tradition of our group to visit, until a group of eight orphaned ex-CSX Transportation AC6000Ws took over for the aging 6-axle MLW’s late in 2019.

Please enjoy a few of the more memorable images taken over five years of my visits to the railroad. In 2022, WNY&P is still a busy, heavy-duty railroad and demands safety and respect.

When asked formally, the railroad has been a gracious host during the period of photographs presented, and always welcoming of fans who respected their rules. A trip into the hills of western New York and Pennsylvania is always time well spent, especially along the revived rails of the WNY&P.

One thought on “Working mountain Alco locomotives from the WNY&P”