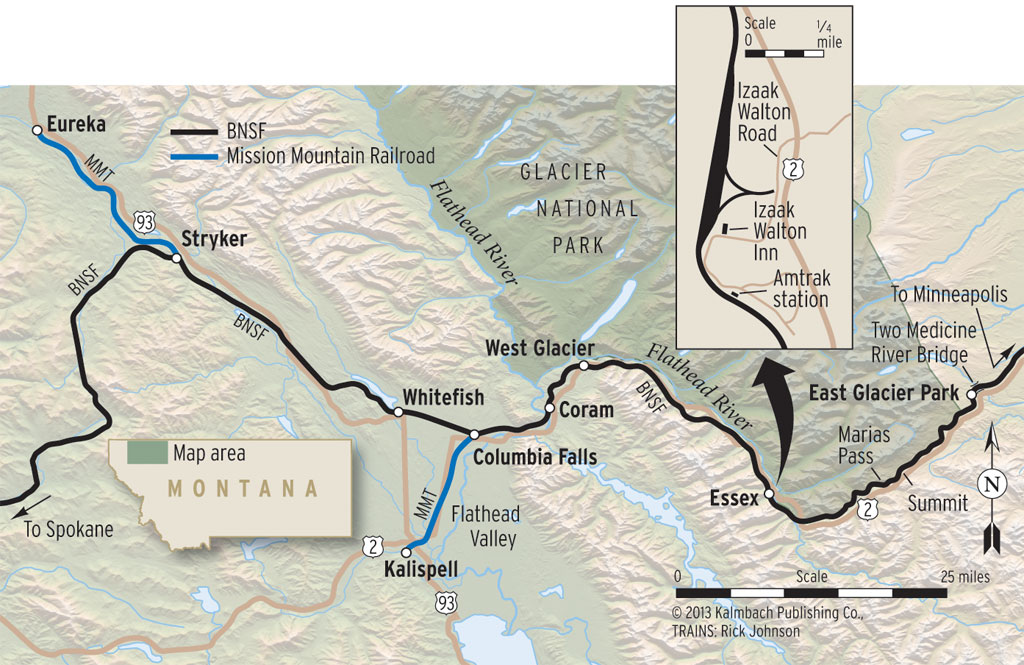 Although Marias Pass is among the lowest railroad crossings of the Continental Divide in the United States at 5,213 feet, nothing is small about BNSF Railway’s route through northwest Montana. Built by James J. Hill’s Great Northern Railway in the 1890s, the line across Marias Pass remains a critical transcontinental route to the Pacific Northwest as well as a spectacular place to enjoy mountain railroading. Northwest Montana is also home to one of the nation’s crown jewels: Glacier National Park.

TRAIN WATCHING
A great place to start exploring Marias Pass is Whitefish, located in the heart of the Flathead Valley. The ski town of about 6,300 people features a yard and is a crew change point. Anchoring the downtown is the 1927 GN depot built in an Alpine style similar to the historic Glacier National Park chalets. Moving east, the railroad goes through the towns of Columbia Falls (where BNSF interchanges with short line Mission Mountain Railroad), Coram, and West Glacier. The latter is the most popular entrance to the park and is where some of the best trackside scenery begins. East of West Glacier, U.S. Highway 2 and the railroad twist and turn along the southern boundary of Glacier National Park. Dozens of spectacular photo locations can be found along the road all the way to Marias Pass, including notable spots like Essex, home to the iconic Izaak Walton Inn. At Summit, 67 miles east of Whitefish, trains begin to descend the grade and roll toward the wide open plains. The area around East Glacier Park provides great vantage points to see eastbound trains emerge from the mountains and cross the epic Two Medicine River Bridge.

Like any mainline railroad, the number of trains per day can vary. On average, Marias Pass sees 25 to 30 trains during a 24-hour period. The line also features Amtrak’s Empire Builder. In early 2013, the line saw a sudden spike in unit oil trains from the Bakken region of North Dakota.

Watco’s Mission Mountain Railroad operates two independent segments, between Kalispell and Columbia Falls and between Stryker and Eureka. The southern portion out of Columbia Falls is busier, and on most weekdays it’s easy to find a switcher working a lumber mill or out on the line.

Photographing Marias Pass’ stunning scenery doesn’t come easy. The area along Glacier National Park is remote, and most people will find their cellphones useless. Places to buy food, supplies, and gas are few, especially between West Glacier and East Glacier Park. Lastly, the area is home to the largest grizzly bear population in the continental U.S., and sightings are common. Anyone railfanning here should carry a can of bear spray and know how to use it.

FOR YOUR FAMILY
Inside Glacier National Park’s 1 million acres of mountains, lakes, and forests are 700 miles of hiking trails and one of the most spectacular drives anywhere, the legendary Going-to-the-Sun Road. Glacier Park and the nearby Flathead National Forest offer great camping, which will keep you close to the tracks. A great way to conclude a day of exploring the park or railfanning is to unwind in Whitefish, which has great restaurants and bars. In fact, you can keep watching the rails from the balcony of the Great Northern Brewing Co. downtown, while enjoying a pint of appropriately named Empire Builder Stout. 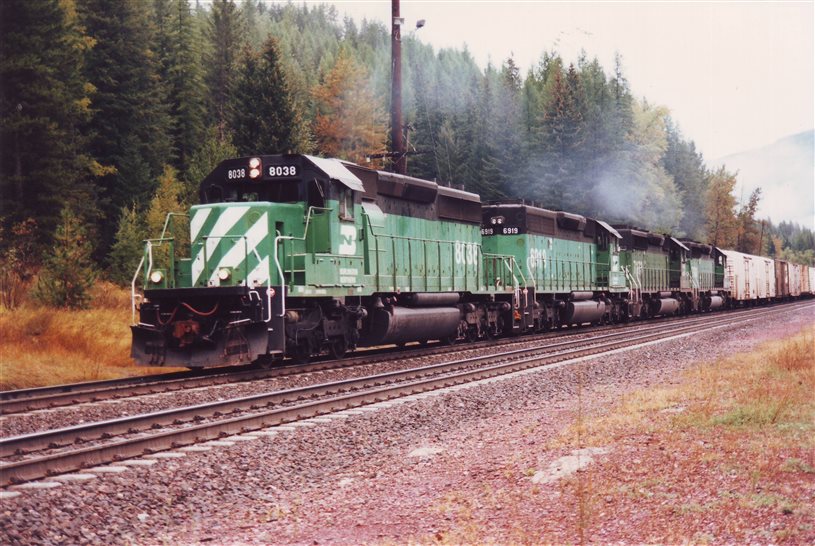 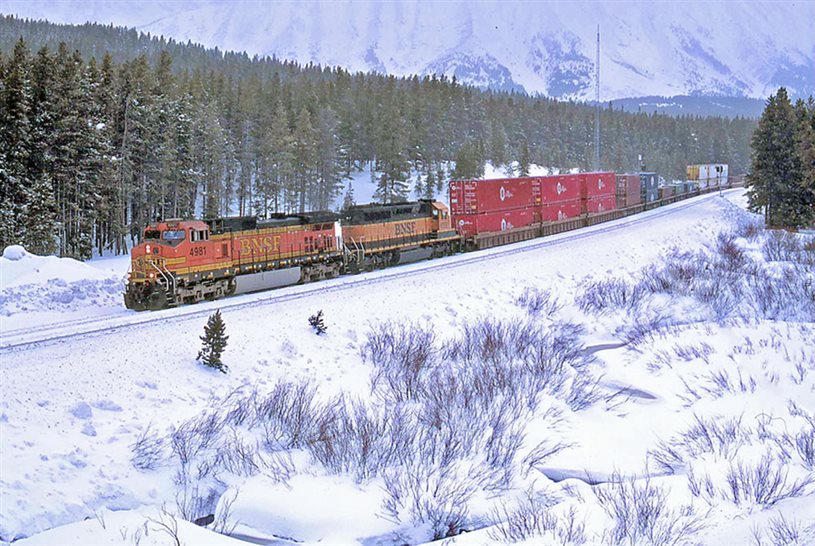 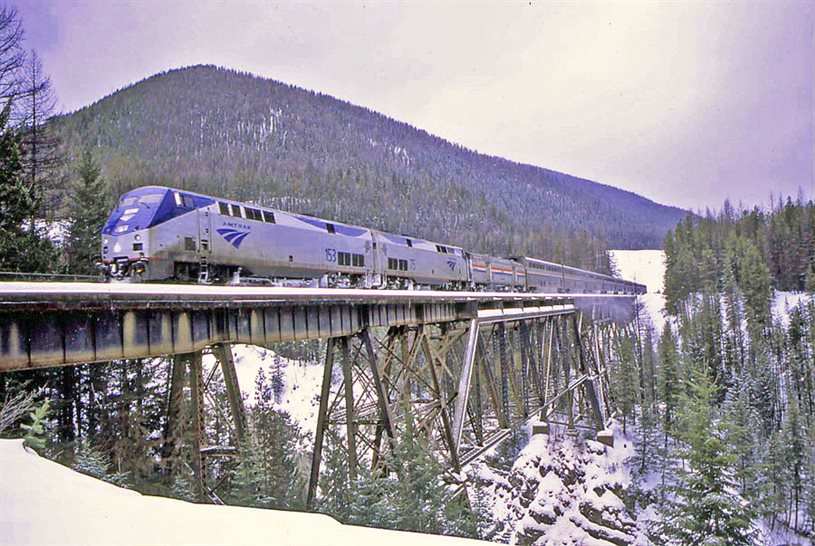 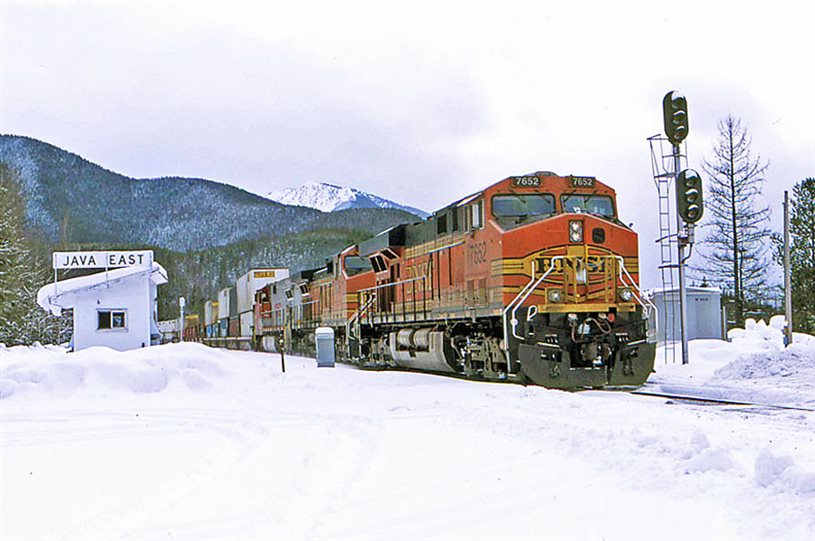 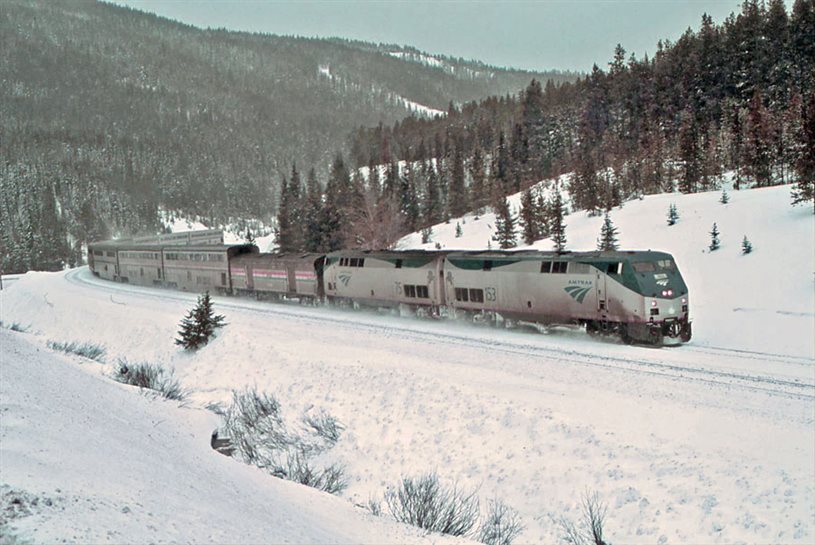