Home / Railroads & Locomotives / Hot Spots / Kansas City Southern: Where to see it while you still can 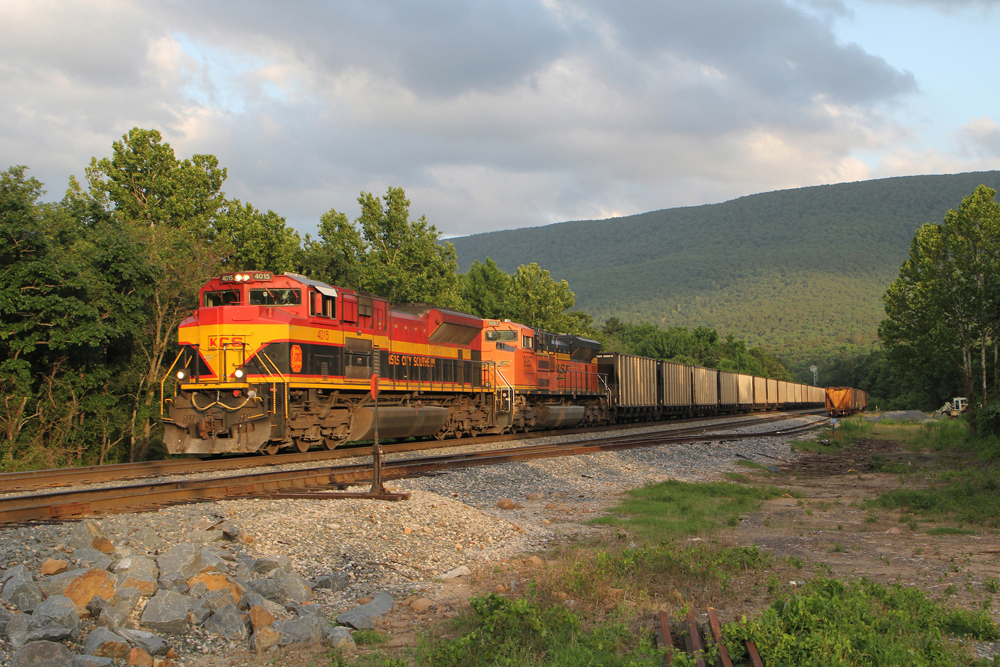 KANSAS CITY — With the recent announcement that Canadian Pacific is acquiring Kansas City Southern, railfans will no doubt be heading to the KCS to capture the last days of the smallest of the Class I railroads. But where should you go to catch the action on such a vast system? Here’s a few highlights, gleaned from KCS aficionados and fans.

At the heart of the original KCS south of Heavener, Okla., is Rich Mountain, a 45-mile crossing of the Ouachita Mountains and the summit of the most scenic portion of the Kansas City Southern north-south main line between Kansas City and Shreveport, La. This is wooded terrain, with no tunnels or substantial bridges, just curves and grades which slow trains down. The advantage is U.S. Route 59/70 parallels the grade for much of its distance, making photography relatively easy. The line is single track CTC with passing sidings. Coal trains that challenge the grades here use other railroads’ power, so to see KCS power look for manifest trains.

There are no worries about catching KCS power on branch-line trains, and if you’re in Heavener to catch action on Rich Mountain, an easy catch is the Fort Smith “Dodger” (the railroad’s term for a local). The Dodger departs Heavener on weekday mornings and heads up the Heavener Subdivision main line 12 miles north to Poteau, Okla., and then onto the 27-mile branch to Fort Smith, Ark. The line, which once belonged to the Frisco, also has a tunnel just south of the Arkansas state line, which is allegedly the only railroad tunnel in Oklahoma. Fort Smith offers other interesting highlights for photographers including the Fort Smith Railroad, which uses ex-Santa Fe GP20s, and the Arkansas & Missouri, which has Alcos for switching and interchange with the other railroads.

If large bridges are your thing, travel to Baton Rouge, La., to see the Huey P. Long Mississippi River Bridge. The 5,879-foot steel truss through deck bridge carries U.S. Highway190 with four traffic lanes, two on each side of KCS’ track. Opened in August 1940, this is the second Huey P. Long bridge over the Mississippi River and is configured similar to the Long Bridge in New Orleans, with long railroad trestles on either end of the bridge.

Another KCS bridge can be found along the railroad’s “Meridian Speedway” at Vicksburg, Miss. The former Illinois Central bridge opened in 1930 and was added to the National Register of Historic Places in 1989. It also carried road traffic until 1998. The railroad passes under the parking lot of the Mississippi Welcome Center at the east end of the bridge, which provides an excellent vantage point to capture eastbound trains crossing the 8,546-foot bridge.

The “heart” of the original KCS is Shreveport, La. From there, KCS lines head west to Dallas/Fort Worth; east to Jackson and Meridian, Miss.; southeast to New Orleans; southwest to Lake Charles and Houston; and north to Kansas City. To handle all this traffic, KCS maintains the 257-acre Deramus Yard, a hump yard with 75 miles of track. In 2020, KCS announced a $50 million plan to expand the yard, but with Canadian Pacific’s aversion to hump yards and embrace of Precision Scheduled Railroading, it remains to be seen if Deramus will continue in its present form. With all the lines coming in and out of town, if you want to see lots of KCS action, Shreveport is the place to go.

The prize “catch” on KCS is its set of A-B-A F units that pull special trains. Of course, business trains don’t run on a set schedule, so it’s tough to catch one. But each December the railroad operates across its system the Holiday Express, which has traditionally been pulled by the Fs. The event, which brings Santa Claus and his elves to communities throughout KCS’ U.S. rail network in free, public events, also serves as a charitable fundraiser for the Salvation Army. It was cancelled in 2020 because of the pandemic, but with more vaccinations proceeding, hopefully life will be more normal by December and the Express can return. While many of the Holiday Express moves take place after dark, several ferry moves between display cities are in daylight, and KCS publishes the display schedule.

This hardly scratches the surface of KCS’ 6,700-mile network in the U.S. and Mexico, so there’s plenty of opportunity to catch this railroad in its last months of independent existence. See you trackside!

7 thoughts on “Kansas City Southern: Where to see it while you still can”