Class 1 railroads are the giant freight railroads that own the majority of tracks in North America. Their lines span the continent, and each day their yards and terminals send forth hundreds of trains carrying goods of all types. 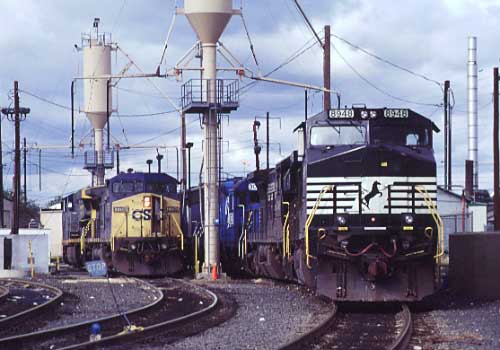 General Electric locomotives belonging to CSX Transportation and Norfolk Southern, the two eastern Class 1 railroads, sit side-by-side at the engine terminal in Newark, N.J.
Matt Van Hattem
If you’re in your car watching a long 100-car freight train roll over a grade crossing, chances are good that the train belongs to one of the Class 1 systems. The Class 1s operate 70% of the total track miles in the U.S., employ 73% of the labor force, and account for more than 79% of total rail freight revenues.

But what does Class 1 mean? The federal Surface Transportation Board categorizes railroads by size and is responsible for establishing the thresholds that determine the categories. As of January 2006, a Class 1 railroad was defined as one that generates revenues of $289.4 million or more each year. Class 2 railroads are those with annual revenues between $20.5 million and $289.4 million. Class 3 railroads have earnings of less than $20.5 million.

As of January 2001, there were seven Class 1 systems operating in the U.S. and Canada. While their roots reach back to the earliest days of American railroading, today’s mega-systems were formed from countless mergers, acquisitions, and consolidations. (In fact, when TRAINS magazine profiled the Class 1s fifteen years ago, there were 14, a decline of over one third. This can be attributed to several big mergers that occurred in the 1990s and a change in the revenue threshold used for Class 1 reporting, up from $93.5 million in 1990.)

No matter what the railroad’s name or affiliation, the tradition of operating heavy freights on high-volume main lines continues with the Class 1s. Here’s a look at each Class 1 system.