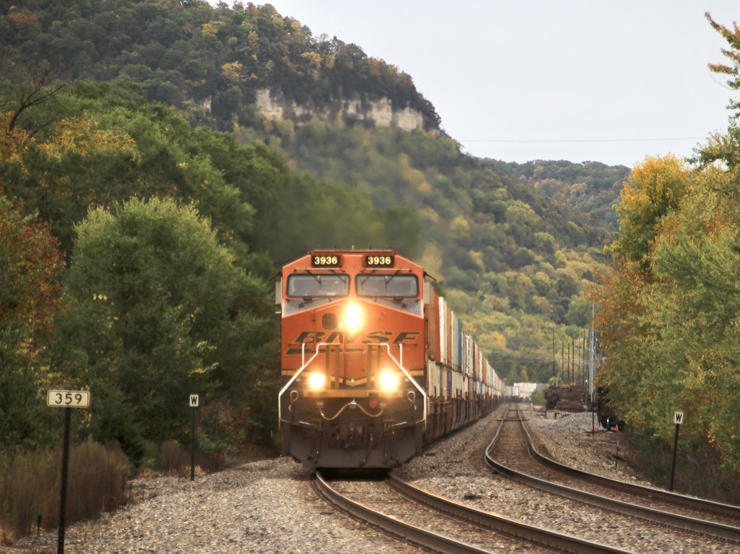 Governor announces BNSF intermodal service for North Dakota
North Dakota will gain direct intermodal access to international markets for the first time through a BNSF Railway facility in Minot. Gov. Doug Burgum made the announcement Wednesday, saying that the service to begin next week will be the culmination of a more than two-decade effort by state officials. In a press release, Burgum called the development “a game-changer,” saying, “Producers and processors across our state will now have access to competitively priced transportation, which will enable us to further grow and diversify our economy.” Burgum said. “We’re deeply grateful for everyone at the local, state and federal levels who worked tirelessly for more than two decades to make this a reality.” James Leiman, director of economic development and finance for the North Dakota Department of Commerce, said, “Adding intermodal, a process which reduces the number of touch points, will reduce shipping costs for agricultural producers by an average of 15 to 25%. This is especially critical given the global economic environment.”

Plasser American plans $52.6 million expansion of Virginia headquarters
Maintenance-of-way equipment manufacturer Plasser American plans a major expansion of its headquarters in Chesapeake, Va., adding 82,000 square feet of manufacturing space and a 45,000-square-foot office building as part of a $52.6 million expansion. Virginia Gov. Ralph Northam announced the expansion on Wednesday, saying the expansion will add 98 new jobs to the more than 300 already employed at the Chesapeake facility. “Plasser American has been a valued employer and corporate partner to Virginia and the City of Chesapeake since the opening of its manufacturing facility 50 years ago,” Northam said in a press release. “…  Growing Virginia’s substantial manufacturing industry is key to rebuilding from this public health crisis, and we thank Plasser American for playing an important role in our ongoing recovery efforts.” Plasser will receive a $450,000 grant from Virginia’s Opportunity Fund to help with the project, and is also eligible to receive benefits from the Port of Virginia Economic and Infrastructure Development Grant Program, as well as the Railroad Industrial Access Program administered by the Department of Rail and Public Transportation.

Negotiations continue to keep Huron Central in operation
A Canadian government official says the government is working to ensure that Ontario’s Huron Central Railway continues to operate, while the Member of Parliament representing Sault Ste. Marie, Ont., says discussions on the short line’s future are continuing. The Kingston Whig-Standard reports the chairman of a group heading negotiations between the railroad and other stakeholders says the Genesee & Wyoming operation is looking for a five-year commitment of about $44 million to keep the line operating, of which it is willing to contribute $11 million to $12 million. Chairman Joe Fratesi says the first year of that five-year plan would likely see $2 million in funding from the federal government, $1 million from the provincial government, and $1 million from the Huron Central. Genesee & Wyoming said in September it would shut down the line between Sault St. Marie and Sudbury, Ont., by the end of 2020 without government support [see “Digest: Maryland proposes cuts to MARC …,” Sept. 2, 2020]