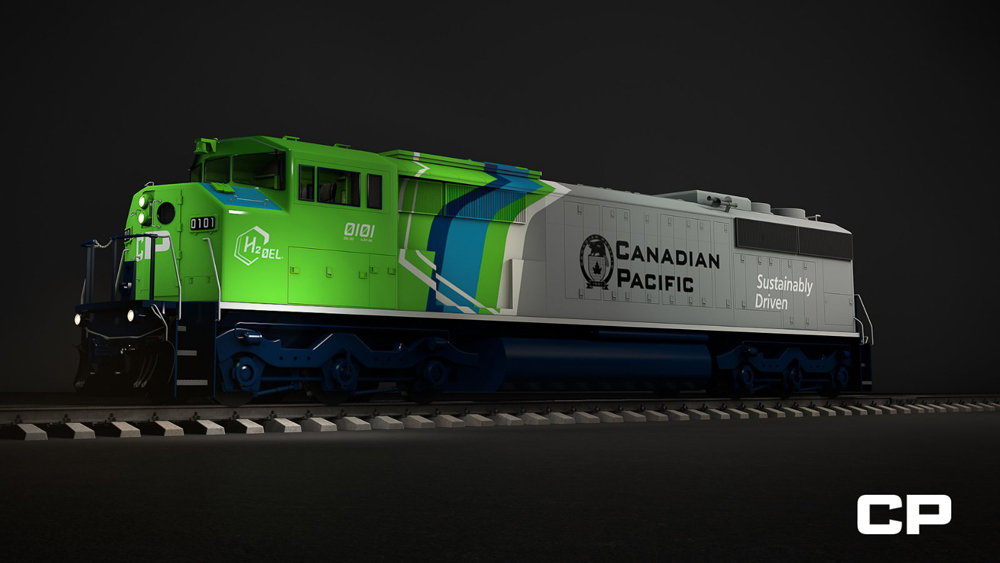 NEW YORK – Canadian Pacific’s first hydrogen fuel cell locomotive, a converted SD40-2F dubbed H2 0EL for “hydrogen zero-emissions locomotive,” will roll under its own power by the end of the year and then enter test service next year, CEO Keith Creel says.

CP’s homebuilt locomotive test bed, along with its headquarters solar array and other sustainability efforts, were recognized this month at the United Nations COP26 Conference in Glasgow, Scotland, Creel told the RailTrends 2021 conference on Nov. 18.

“I think this could be a needle-mover for the industry,” Creel says of the hydrogen project, the first to use fuel cells and batteries to power a freight locomotive’s electric traction motors.

But Creel emphasizes this is an experiment. “And again, it may not work out. But I think it’s the right thing to do,” Creel says. “We’re not betting the farm on it, for lack of a better term.”

The $15 million CP is investing in the project was matched this month by a grant from Emissions Reduction Alberta, which will fund the conversion of a switcher and a high-horsepower unit. Also included in the grant: Funding for hydrogen production and fueling facilities at CP’s yards in Calgary and Edmonton, Alberta [see “CP to build additional hydrogen locomotives …,” Trains News Wire, Nov. 1, 2021]. Emissions Reduction Alberta released this video about the project.

The Calgary facility will include an electrolysis plant to produce hydrogen from water, with electricity supplied by CP’s solar array. The Edmonton plant will include a small-scale steam methane reformation system that extracts hydrogen from natural gas produced in the energy-rich province. The facility will be built to accommodate equipment that can capture greenhouse gases.

Creel says he was on an inspection trip last year when the “talented Dr. Mulligan” pitched the concept. “He said, ‘I’ve got an idea. I believe I can connect all these components and we can create the first ever freight version of a hydrogen battery locomotive,’” Creel says.

Creel says he wants a hydrogen locomotive that has the power and range of a diesel-electric. “I’m operationally minded,” he says. “Don’t come to me with a solution that causes more headaches. So if you don’t get the range of a diesel locomotive, we’re not going to have that discussion.”

Mulligan went through CP’s railroader training programs and is a certified conductor and locomotive engineer who understands both operations and technology.

“For a modest investment, he said just let me prove the concept,” Creel says. “This has gone from concept to reality. We’ll be running the locomotive this year. It will move this year, we’ll be switching with it next year.”

Mulligan and a five-person team are developing the prototype locomotive in Calgary.

“Our vision is to prove the concept,” Creel says of the locomotives and related fueling systems. CP will share information with locomotive manufacturers and, if the project is successful, see if they have an interest in building production versions of hydrogen locomotives.