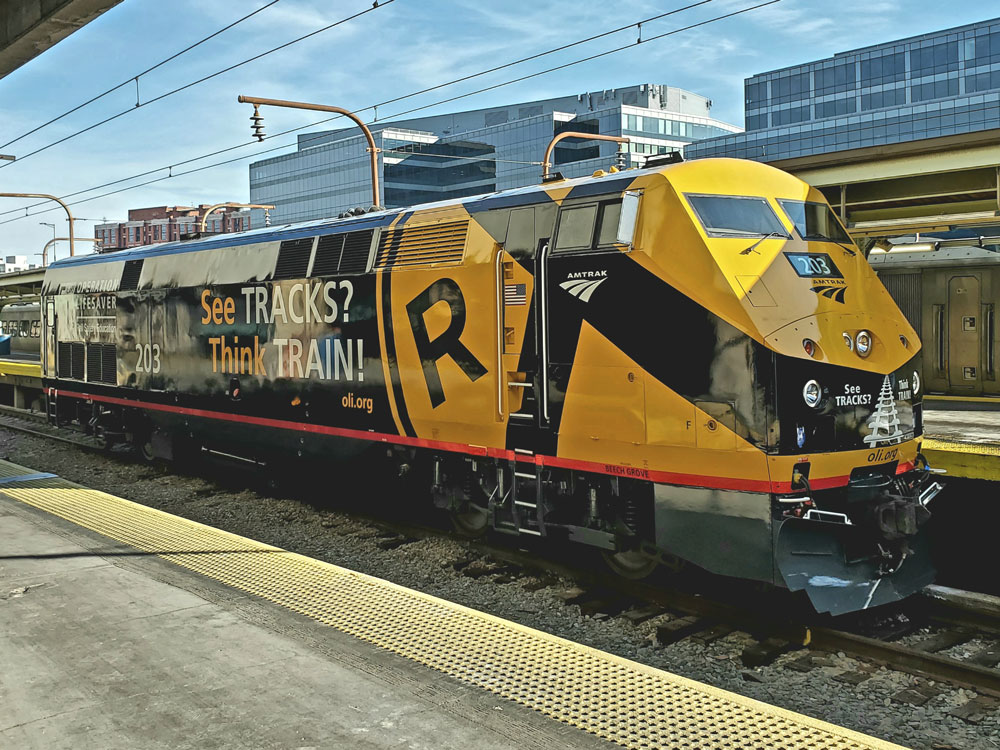 WASHINGTON – Amtrak today unveiled a specially painted P42DC to mark the 50th Anniversary of Operation Lifesaver. P4DC No. 203, repainted with the message, “See Tracks? Think Train!” was released into service today during a ceremony at Washington Union Station. The black-and-yellow locomotive commemorates the 50th anniversary of Operation Lifesaver, the nonprofit organization dedicated to providing nationwide railroad safety education and awareness.

Operation Lifesaver was founded in 1972 with the goal to reduce railroad-related collisions, deaths, and injuries across the United States, utilizing the “3 Es” – education, engineering, and enforcement. “See Tracks? Think Train!” is one of several major campaigns the organization conducts to c

onnect with the public to increase visibility and awareness around railroads.

“Amtrak and Operation Lifesaver have been partners for many years with the goal of educating the community on the importance of avoiding high-risk behavior on or near railroad crossings and tracks,” Amtrak President Stephen Gardner said in a news release. “We are proud to celebrate Operation Lifesaver in reaching a critical milestone.”

“Over the past five decades, Operation Lifesaver and its safety partners have helped reduce railroad-crossing incidents by 84%, from 12,000 in 1972, the year Operation Lifesaver started, to 1,900 in 2020. But there is still work to be done. Every 3 hours in the U.S., a person or vehicle is hit by a train,” OLI Executive Director Rachel Maleh says.

Amtrak 203, constructed in October 2001 by General Electric, was repainted in Operation Lifesaver’s rail-safety scheme at Amtrak’s shop in Beech Grove, Ind. The locomotive will remain in revenue service throughout Amtrak’s national network.