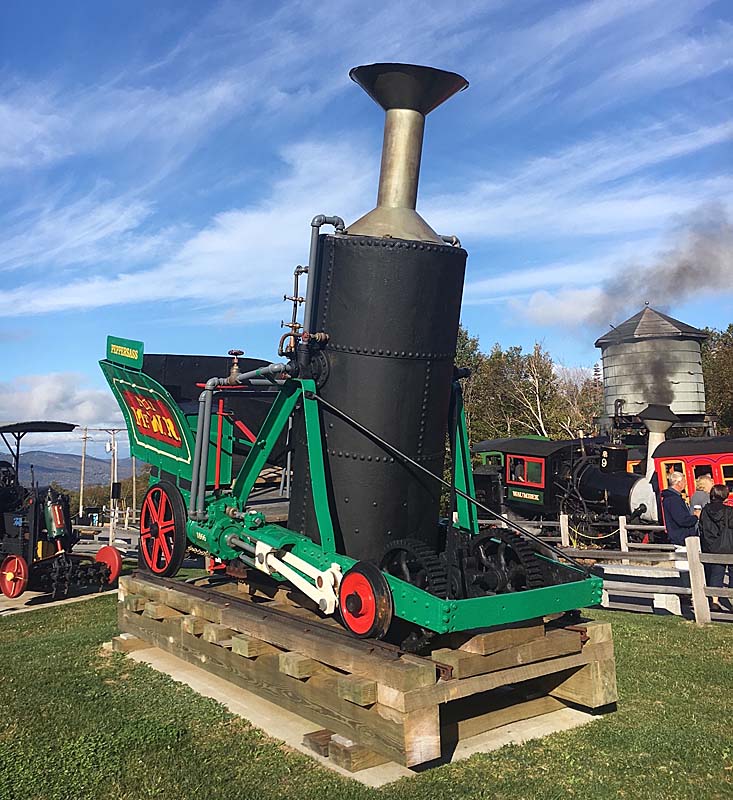 ‘Old Peppersass’
Mount Washington Cog Railway
BRETTON WOODS, N.H. – One of the most unique steam locomotives ever built is hitting the road next month to mark the 150th anniversary of the world’s first cog railroad.

A cosmetic restoration of the Mount Washington Cog Railway’s first mountain-climbing steam locomotive – dubbed Old Peppersass because of its similarities to a hot sauce bottle – was recently completed in New Hampshire and next week it will start a three-city tour of the Northeast. Locomotive No. 1 will make stops in Philadelphia; Scranton, Pa.; and Washington, D.C. Afterwards the locomotive will come home to the White Mountains for a summer of celebration on the world’s oldest mountain climbing railroad.

Metcalf also has good news for steam fans: The Cog plans on offering at least two steam-powered trips a day to the summit of Mount Washington this summer.

But the star of the show will be No. 1, which was built in 1866, three years before Sylvester Marsh’s cog railroad was completed to the summit of the Northeast’s tallest peak. The locomotive last ran in 1929 to celebrate the 60th anniversary of the railway. Unfortunately, the locomotive derailed on that ceremonial run, killing one person. The locomotive was pieced back together after the derailment and put on display at Base Station.

The railroad is also preparing for a number of events over the summer. On June 22, the railroad will host a special ticketed celebration with dignitaries and presentations celebrating the history of the Cog. The following it day, it will host an employee reunion. And on July 3, the actual anniversary of the railroad’s completion, it will have free festivities for families, including birthday cake and fireworks.

The Cog’s regular operating season begins on April 6 and steam operations begin in late May. In recent years, only 0-2-2-0 No. 9 has been in service. In order to handle the additional steam runs planned for this season, locomotive No. 2, built in 1875, has returned to the active roster, Metcalf says. Both locomotives were built by the Manchester Locomotive Works. In recent years, the Cog has only had one steam-powered excursion a day with most of the trains being powered by one of the road’s seven bio-diesels.