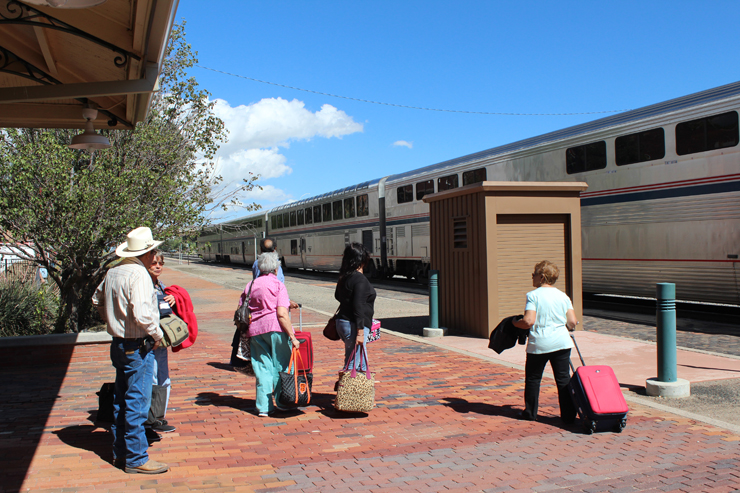 Passengers wait to board the Southwest Chief at Las Vegas, N.M., on Oct. 4, 2018. The Chief‘s future was a bone of contention during a Wednesday Senate hearing on Amtrak.
Bob Johnston

He found a willing ally in another panelist, National Transportation Safety Board member Jennifer Homendy. She specifically referenced the Southwest Chief when advocating for a national policy to prohibit Federal Railroad Administration exemptions to PTC on less traveled routes.

“They should all be eliminated; they weren’t authorized in the law,” she stated flatly, adding, “an iPad in the cab won’t stop a train if the engineer runs through a red signal.”  This is an alternative to PTC that Amtrak’s president and other NTSB members have advocated, based on their mutual familiarity and comfort zone describing what pilots use in an airline cockpit, as opposed to route-specific familiarization protocols that take place in a locomotive cab.

Homendy was unaware that the ex-Santa Fe Automatic Train Stop signal system installed on the one-train-daily Southwest Chief route is designed to halt a train under that exact circumstance. Asked whether PTC can prevent collisions with autos at grade crossings, she acknowledged that it didn’t, but failed to mention that Amtrak has been utilizing an add-on feature to do that in its Michigan line’s Incremental Traffic Control System that has been in revenue service since 2012.

Anderson also claimed Amtrak is “in the best shape in our history,” “customer satisfaction surveys are at record levels,” and that “we feel good about where we are.” But Sen. Tom Udall (D.-N.M.) was less complimentary, accusing Amtrak of “wasting resources in proposing to disband the Southwest Chief … When Congress rejects Amtrak’s corridor plan, it appears that Amtrak will once again be left without a real vision for a national network.”

Udall told Anderson, “I was very discouraged to hear you say you are looking at breaking up long distance routes — that wasn’t in your written testimony quite that strongly.” The senator added, “While progress has been made, I am confident the threat is not over. I see that Amtrak continues to blame Congress and others for budgetary woes when it’s convenient, yet when tasked with engaging with stakeholders you are slow to do so.”

In response to a question about Amtrak’s engagement with stakeholders, Colorado Rail Passenger Association President Jim Souby noted, “The way Amtrak evaluates any of its services is purely related to metrics based on passenger trips.” He added, “Of course, rural communities aren’t going to have as many passengers boarding as in a heavy metropolitan area, but in Kansas, Colorado, and New Mexico, the economic and social benefits total $180 million a year … so there’s something wrong with the equation when they are not taking that into account — it’s a public transportation system.”

Souby was citing a study by the Rail Passengers Association in collaboration with Mississippi’s Trent Lott Institute documenting the Chief‘s benefits. Another study by the association pegs the Empire Builder’s public contribution to the communities it serves at $327 million annually. “We’re talking about a huge public return on that federal investment,” he said.

In a follow-up exchange with Anderson, U.S. Sen. Cory Gardner (R-Colo.) asked for a commitment from Anderson that Amtrak would work with Souby and other Chief stakeholders.

Anderson replied, “I’m glad to hear that it’s worth $180 million to the states, so then they can get their matches up for us to be able to do the work that needs to be done to keep this operation underway.”

Souby’s response pointed out that in his opinion, “Not every single mile of the 1,400 miles of non-Amtrak track that Amtrak runs on should (be required to have) PTC. Specifically,” he added, “the New Mexico line used by the Southwest Chief only has one train each way every 24 hours. If in fact it is $500,000 a mile to install PTC, we’re talking about $100 million for that 230-mile line. That’s an extremely costly investment for two trains.”

— Updated at 3:30 p.m. CDT on June 27 with clarification from Rail Passengers Association on sources of studies cited in Jim Souby testimony, and with the association’s correction of its figure for the financial value of the Empire Builder.