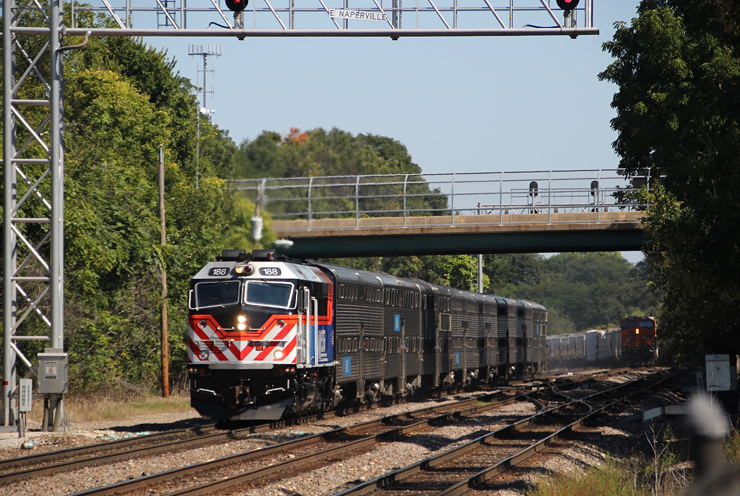 A Metra BNSF train approaches the Naperville station on Sept. 15, 2018. Two communities have hired a lobbying firm as part of an effort to have the BNSF line extended into Kendall County, Ill.
TRAINS: David Lassen

OSWEGO, Ill. — Two Chicago suburbs have hired a lobbying firm in an effort to Metra’s BNSF Railway line extended to their communities, the Aurora Beacon-News reports.

The Oswego Village Board and Yorkville City Council both approved agreements for the hiring of the Chicago firm Fletcher, O’Brien, Kasper & Nottage, which will be asked to help secure state funding for an extension of the BNSF line into Kendall County. The service currently ends in Aurora, about 6.5 miles from Oswego and 12 miles from Yorkville.

The two communities will pay a combined $7,000 per month for the one-year contract, effective Dec. 1.

Discussions about extending Metra service into Kendall County have been ongoing for about 20 years. In 2016, the commuter railroad announced it was resuming planning for such service, an effort that was then projected to take 18 to 24 months. [See “Metra to resume planning on BNSF extension,” Trains News Wire, May 20, 2016.]

The effort could be complicated by the fact that Kendall County is the only one of the “collar counties” surrounding Chicago that is not a member of the Regional Transportation Authority, which oversees Metra, the Pace bus system, and the Chicago Transit Authority. Member counties pay a 0.75 percent sales tax to help fund RTA services.

Asking Metra to add services could also be difficult at a time when the commuter railroad is waring that it might have to cut service on existing lines without additional state funding. [See “Metra OKs budgets, renews call for state capital funding,” Trains News Wire, Nov. 12, 2018.]