Wheel fault, recorded by lineside detectors, would not have met AAR guidelines 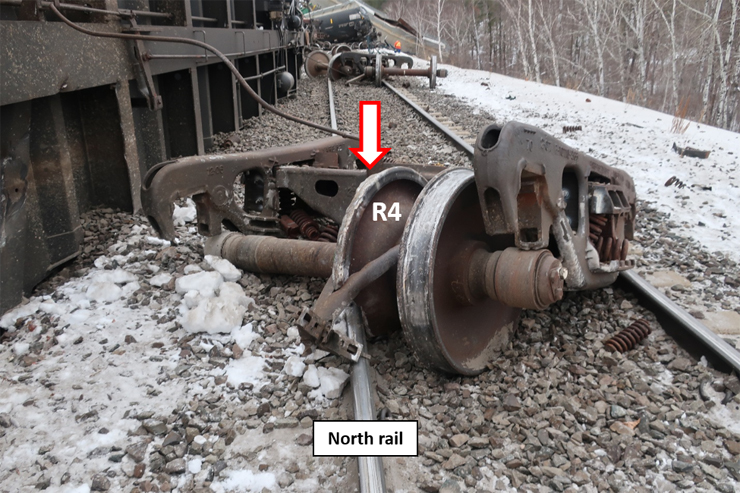 A broken flange on this wheel caused a 2018 derailment of a Canadian National train in Manitoba.
Transportation Safety Board of Canada

OTTAWA — A 2018 derailment of a train near the Manitoba-Ontario border was caused by a cracked wheel with a previously detected fault which did not meet U.S. safety guidelines, but did not require immediate action under Canadian National Railway rules.

The Transportation Safety Board of Canada’s summary of a report on the Jan. 6, 2018, derailment near Rennie, Man., issued Wednesday, says the accident “highlights the need for additional means to proactively identify emerging sub-surface cracks in wheels and remove them from service prior to failure.”

The accident was caused by a rim fracture on a wheel on the 38th car of the 64-car train. In the two days prior to the accident, lineside detectors had recorded five wheel impacts for that car (because of an out-of-round wheel) in excess of Association of American Railroad rules, which recommend removal of wheels registering impacts of 90,000 pounds, or 90 kilopounds (kip), or above. CN’s own guidelines, however, considers impacts up to 139 kip to be subject to “opportunistic repairs,” the TSB report says, meaning at the next opportunity at a certificed car inspection location.

The TSB’s summary says the investigation shows a need for additional enhancements for cracked-wheel detection and a need for ultrasonic testing after wheel reprofiling.

The full report is available here.