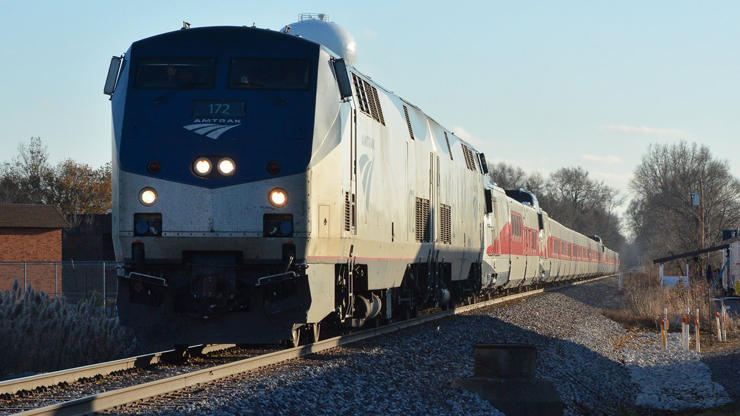 MILWAUKEE, Wis. — Talgo Series 8 trainsets built for but never used by the state of Wisconsin have returned to the Milwaukee factory where they were assembled in 2012, but parties involved in their move or potential use are offering little or no information on plans for the equipment.

Following four days of Trains News Wire inquiries to Amtrak, the Washington State Department of Transportation, or Talgo, only Amtrak released the following statement late Friday: “These trainsets are among the interim equipment options being considered by Amtrak for use in the Pacific Northwest.”

On Monday, a Talgo spokeswoman said, “Talgo is working with Amtrak to place the Series 8 trainsets in service in the Pacific Northwest. They have been moved to Milwaukee for preparation of that service later next year. Some of those enhancements include PTC and features to align with the service provided in the Amtrak Cascades Corridor.”

Three cab cars, three bistro cafes, three baggage-coach end cars and 22 coaches have languished at Amtrak’s Beech Grove Heavy Maintenance Facility since 2014. On Friday, they departed the Indianapolis area as an Amtrak special on the Cardinal and Hiawatha route through Chicago and arrived at Talgo’s Milwaukee plant overnight.

The Series 8s have been regularly run for short distances on yard tracks at Beech Grove and had all systems tested periodically to keep them ready for use, but recently-discovered head end power faults delayed the move from Wednesday until Friday. The train operated in the same Friday slot formerly utilized by the now-discontinued Hoosier State but encountered freight train interference.

— Amtrak is on the hook for supplying a replacement for the Talgo Series VI trainset damaged in the Dec. 18, 2017, Cascades wreck at DuPont, Wash., and perhaps at least one of the other two Washington DOT-owned Talgo VI’s. Amtrak also owns two.

— Contract details between Talgo and Amtrak have yet to be worked out. A sticking point is likely the “interim” aspect.

— The replacements could use a new paint job and will require modifications that add business class seating and a different bistro car setup than their as-ordered configuration. Wisconsin ordered the equipment for enhanced Chicago-Milwaukee-Madison Hiawatha service before Republican Gov. Scott Walker turned back $800 million of federal stimulus money for the route after he was elected in 2010.

— If Amtrak reaches a lease or purchase agreement with Talgo, the ex-Wisconsin Talgo 8’s can operate under a waiver issued in 2018 by the Federal Railroad Administration.

— Washington DOT spokeswoman Janet Matkin tells Trains News Wire, “Amtrak is responsible for supplying appropriate interim equipment to replace Talgo Series VI trainsets currently in service for the Amtrak Cascades system,” but the Federal Railroad Administration is not requiring replacement. She recently told the Seattle Times that her agency wants all Talgo VI trainsets removed from service “as soon as possible” based on a National Transportation Board recommendation. The manufacturer has formally disputed that recommendation [see “Talgo challenges NTSB finding in Cascades accident report,” Trains News Wire, Nov. 1, 2019]. The ongoing conflict between the state and Talgo with Amtrak in the middle has delayed the use of the Series 8s and complicated negotiations.

— Oregon intends to keep in service the two Series 8 trainsets it purchased in 2013, despite Washington’s animosity toward the manufacturer (WashDOT recently shortened Talgo’s renewable maintenance contract). A permanent addition of more compatible equipment would help protect Oregon’s investment. Though three shorter trainsets can be created from the red-and-white orphans, it is more likely that they will be configured into two trainsets with an additional spare cab car, baggage, and bistro available to substitute as necessary.

Trains News Wire will continue to seek more details as they become available.

— Updated on Dec. 10 to include Talgo statement.