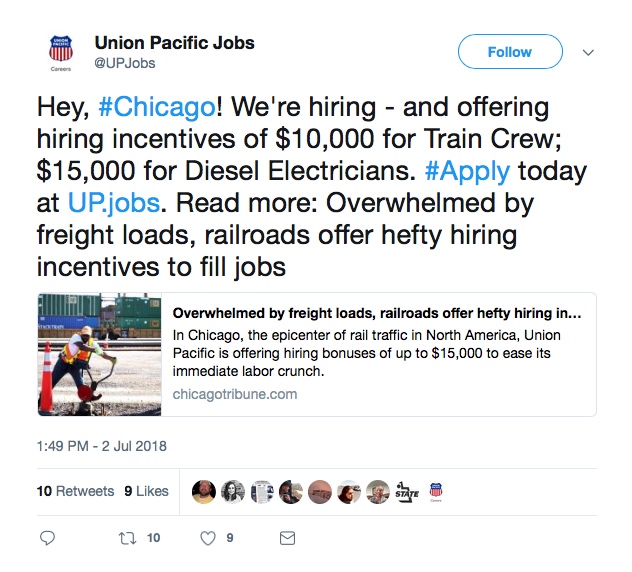 Union Pacific via Twitter
CHICAGO — You could be whistling “I’ve Been Working on the Railroad” all the way to bank if you hire out with a Class I railroad that’s having a hard time finding new employees.

As the job market tightens and rail traffic climbs, Union Pacific and BNSF Railway are both continuing to offer incentives that they began in the spring in certain locations on their networks. Canadian Pacific is offering bonuses for qualified conductors.

And for new conductors, UP is offering a $20,000 incentives in Cheyenne, Green River, and Rawlins, Wyo., Council Bluffs, Iowa, and North Platte. New conductors in Chicago and Des Moines and Boone, Iowa, are eligible for a $10,000 incentive.

Where the job market is not as tight — including Chickasha, Okla., and La Grande, Hinkle, and Portland, Ore. — UP is seeking new conductors but no hiring incentive is on the table.

UP says it’s recruiting heavily in areas where crews are in short supply. Last month the railroad told shippers the number of trains held for lack of crews rose sharply as summer vacation season began.

In Topeka, Kan., the BNSF incentive is $25,000 for diesel mechanics and electricians.

Canadian Pacific is taking a different approach: It’s offering a signing bonus for experienced conductors who are already qualified and therefore can enter service much more quickly than a green recruit.

“CP is working to proactively deal with high attrition rates and hiring in key locations across the network,” Canadian Pacific representative Jeremy Berry says. “CP offers competitive pay and benefits so employees can enjoy a rewarding work-life balance and a lifetime of passion for railroading.”

In order to take advantage of the hiring incentives, new railroad employees generally must pass company training programs, work for anywhere from a year to three years in the same location before receiving all of the incentive cash. Details vary by railroad.

The other three big systems — Canadian National, CSX Transportation, and Norfolk Southern — are hiring but are not offering incentives.

For details and job openings, see the careers pages of the respective railroad websites.