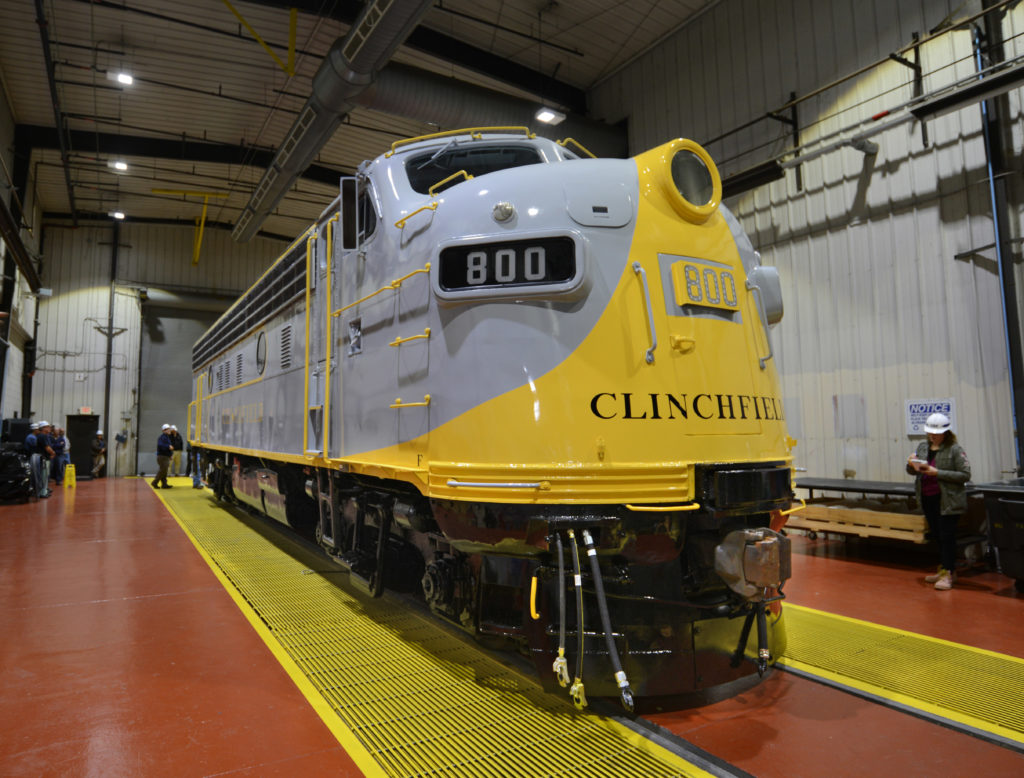 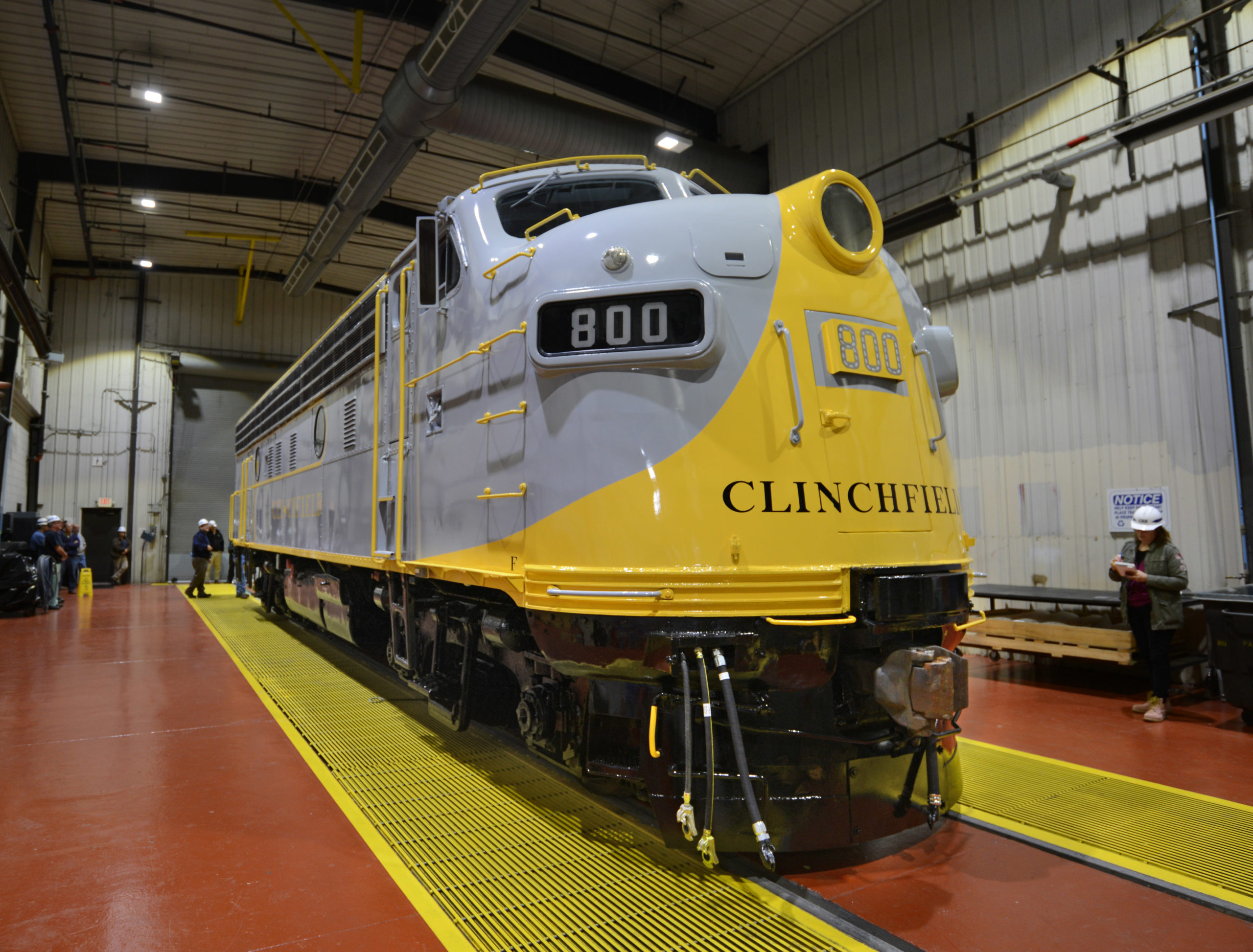 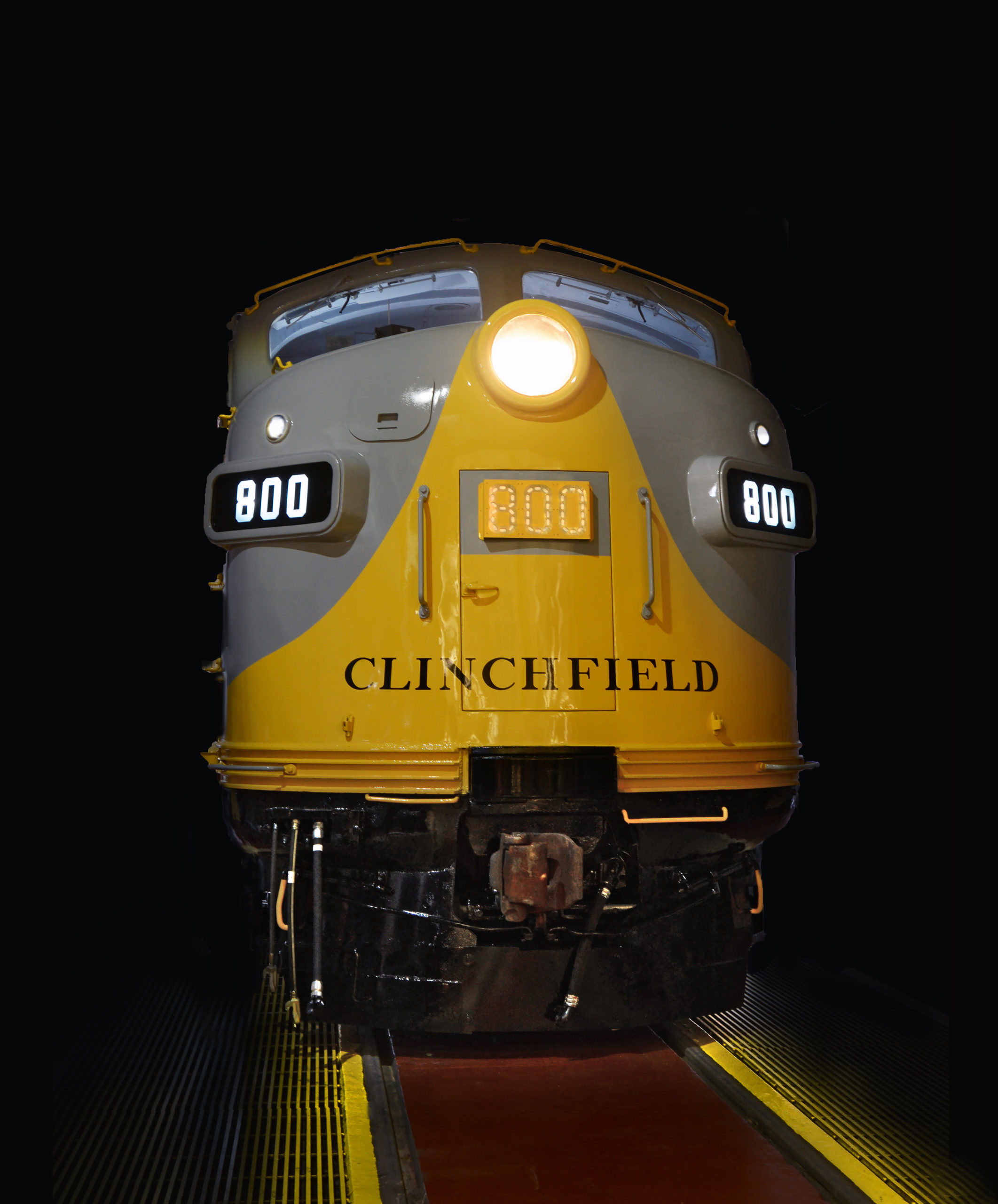 Another view of Clinchfield F3 No. 800. The locomotive is set to pull CSX’s Santa Train this year.
Ron Flanary 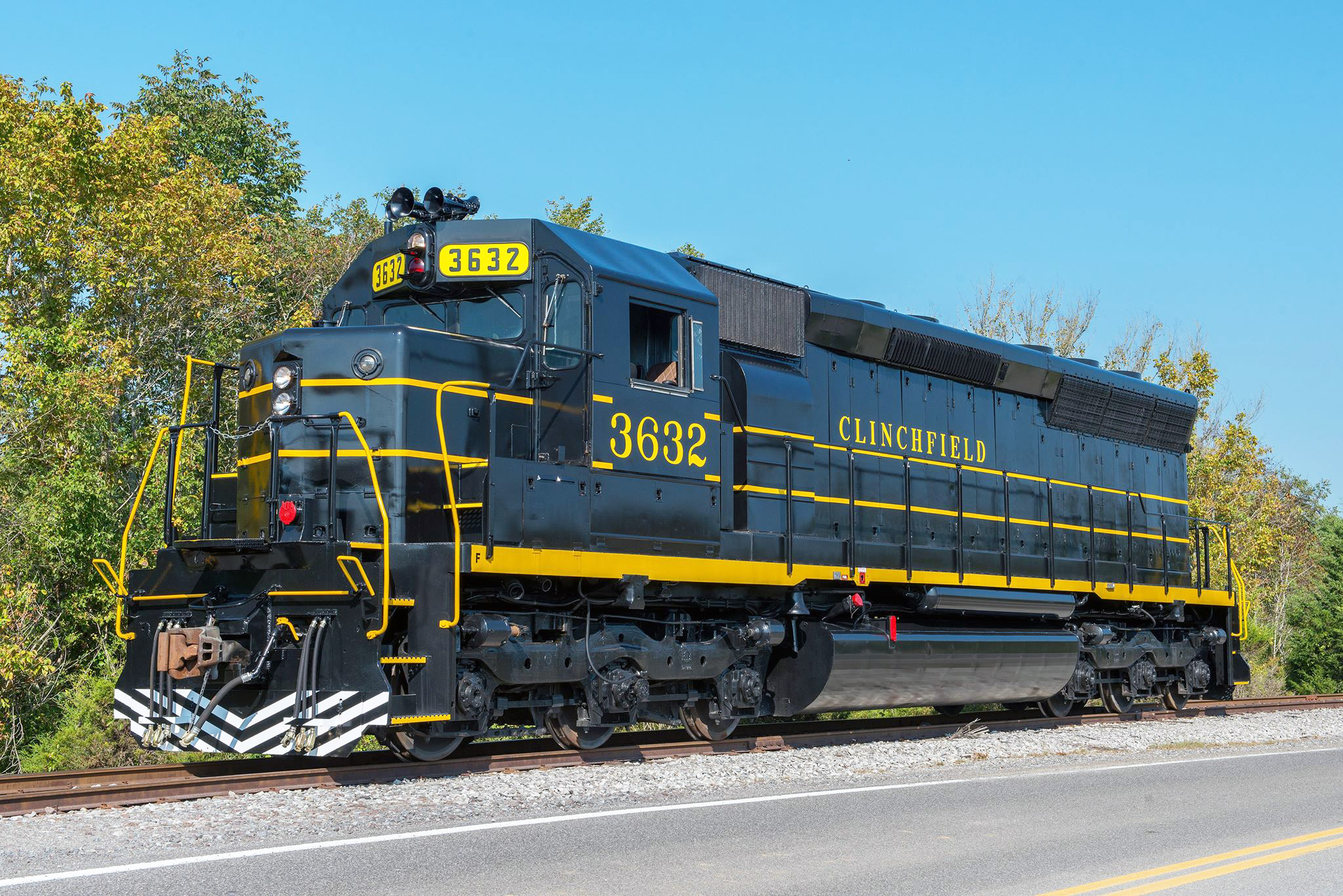 Former Seaboard Coast Line SD45 No. 2024 appears as Clinchfield No. 3632. The locomotive will support No. 800 in CSX’s Santa Train run on Nov. 18.
Casey Thomason
HUNTINGTON, W.Va. — Children and railfans waiting along the route of CSX’s Santa Train this year will get an extra treat from Santa Claus — an original Clinchfield Railroad F unit in new paint pulling the trainload of cheer.

CSX Transportation unveiled the cosmetically restored Clinchfield F3 No. 800 in yellow and gray at its Huntington locomotive shops today. The interior and exterior restoration of the already operating locomotive coincides with the 75th running of the annual Santa Train over the former Clinchfield main line from Shelby, Ky., to Kingsport, Tenn., on Nov. 18.

CSX shop crews spent months searching for old drawings and diagrams on the Clinchfield’s first diesel-electric locomotive, so they could re-paint it as closely as possible to what it looked like when it rolled out of EMD’s LaGrange, Ill., works in 1948. Present-day railroaders even quizzed retired Clinchfield engineers on details such as internal paint and seat colors to ensure historical accuracy of the restoration — although the locomotive must operate with ditch lights to comply with modern safety laws.

The unit was first assigned to lead the Santa Train in 1979, and several subsequent runs as Seaboard System and later CSX No. 116. The last time F-units pulled the Santa Train was in 1989, with No. 800.

No. 800 was built as a Phase V F3A — although railroad historians may refer to it as an F5, due to it being a transitional model to the F7. The locomotive immediately went to work pulling Clinchfield’s hotshot freights, perishables trains, and coal drags, displacing the road’s Challenger-type 4-6-6-4 steam locomotives. As more and newer locomotives were added to the roster, the railroad upgraded No. 800 to F7 specs in 1952.

By the early 1970s, the railroad repainted No. 800 in solid black with yellow lettering and trim. As attractive as the first gray and yellow was on early locomotives, it was a constant battle to keep the motive power roster clean of grime and exhaust smoke on a mountain railroad of heavy coal tonnage, grades, and more than 50 tunnels.

The railroad repainted No. 800 into “Family Lines” gray, yellow, and red in 1979. When Seaboard System folded into the Chessie System and emerged as CSX Transportation in 1986, No. 800 and three other cab units were repainted into an early version of gray and blue. No. 800 even wore “CSX Transportation” on the side for about a week as management considered different variations of liveries.

In 1988, No. 800 was one of four F units assigned to a test operation for General Motors’ RoadRailer service between Detroit and Atlanta. In sets of two, the Fs handled this operation until nearly the end, when conventional hood units took over. It was most likely the last time F-units were used in everyday regular line-haul freight operations on a Class I railroad.

By 1990 “bright future” CSX blue, gray, and with a bright yellow nose/trim was applied to No. 800. It was later briefly used on American European Express’s luxury Chicago-Washington service before going to MARC for use on commuter train service out of Baltimore and Washington. No. 800 as No. 116 was retired serviceable in 1993.

At the request of CSX Chairman Emeritus Hays Watkins, the locomotive was donated to the C&O Historical Society, and placed on display with a host of other equipment at Clifton Forge, Va. As a revenue generator for the society, the unit was leased to the Potomac Eagle operation and repainted “C&O 8016.” The unit was one of those present at the “Streamliners at Spencer” event in May 2014.

Joining No. 800 on this year’s Santa Train will be Clinchfield No. 3632. The volunteers from the Southern Appalachia Railroad Museum in Oak Ridge, Tenn., joined forces with East Tennessee Rail Car Services to restore a privately owned ex-Seaboard Coast Line SD45, No. 2024. This meticulously restored 3,600-hp unit is identical to seven such units SCL traded to the Clinchfield for a like number GE U36Cs in 1977. No. 2024 was renumbered to the next available slot above those units, 3632, and re-lettered exactly as the Clinchfield’s units.