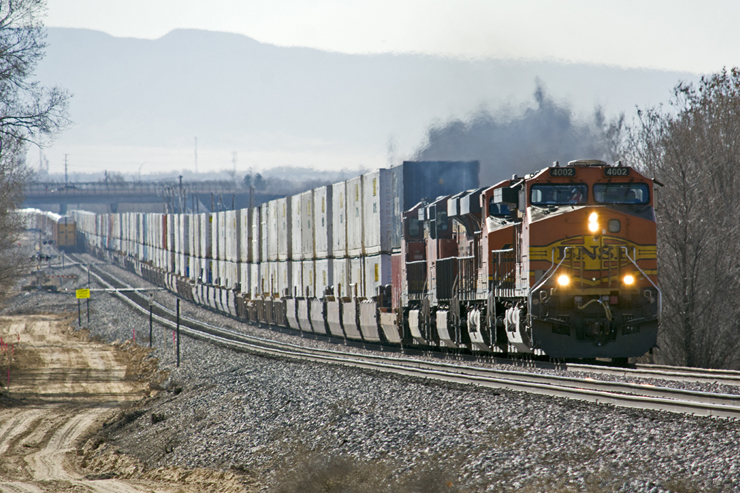 A fresh BNSF Railway crew handling westbound stacks charges up the 10-mile grade from Belen, N.M., to Dalies on March 3, 2018. On the left, preliminary work continues on adding a third main line to this section of the Gallup Subdivision. Meanwhile, an eastbound vehicle train in the distance is first in line waiting as all four eastbound fueling pads in Belen Yard are occupied.
William P. Diven
BELEN, N.M. — With the Southern Transcon now double-tracked across New Mexico, BNSF Railway is adding a third main line to ease congestion on the 10-mile grade west of Belen.

The project is the big-ticket item in the $80 million BNSF plans to spend on capital projects in the state this year. About half of the money is aimed at surfacing and other maintenance on 1,600 miles of track and replacing 15 miles of rail and more than 110,000 ties, according to the announcement made last week.

The stretch of third main on the Gallup Subdivision covers the west end of the Belen Cutoff, the 1908 bypass of Raton Pass that turned sleepy Belen into a rail hub and home to a major freight yard and fuel stop. The 10 track miles climbs 500 feet with a ruling grade of 1.25 percent between Belen Junction in the Rio Grande Valley to Dalies where the Glorieta Subdivision from Raton and Albuquerque, N.M., joins BNSF’s transcontinental line.

“The Southern Transcon is the rail equivalent of a superhighway, making it an ideal route for high-priority, containerized traffic,” Keary Wells, BNSF Southern Division general manager of operations, says.

The investment shows the company’s commitment to providing a safe, efficient and reliable rail network for its customers, he says.

BNSF signal maintainers already are involved in relocating signals and crossing gates while other crews are lengthening drainage culverts.

The new main track 1 on the north side of the right-of-way begins at control point Aragon, end of the existing third yard lead from Belen Junction. At Dalies, the Glorieta Subdivision will connect with the new track, which then ties into the existing main track 1 farther west.

Most of the work is within the existing right-of-way, although BNSF representative Joe Sloan tells Trains News Wire the railroad bought more land for the project. Work also will be done on the two existing main tracks to accommodate the third track passing under Interstate 25, Sloan says.

The new main is expected to be ready for traffic in the first quarter of 2019.

During the last seven years, BNSF completed double-tracking the Clovis Subdivision across eastern New Mexico by carving a second route through the bottleneck of Abo Canyon and bridging the Union Pacific at Vaughn and the Pecos River at Fort Sumner. Lengthy sidings between Abo Canyon and Belen aid in staging westbound traffic destined for fuel and inspections at Belen Yard without tying up the main tracks.

The Transcon west of Belen has multiple crossovers but lacks similar sidings making it a chokepoint on busy days when the Transcon may see as many as 80 trains. Freights stacked up waiting for one of four eastbound fuel pads to clear effectively single track the line for westbounds tackling the grade.

That track project remains in the design phase while BNSF, local government and the New Mexico Department of Transportation continue talks about the crossing and a possible grade-separation project.