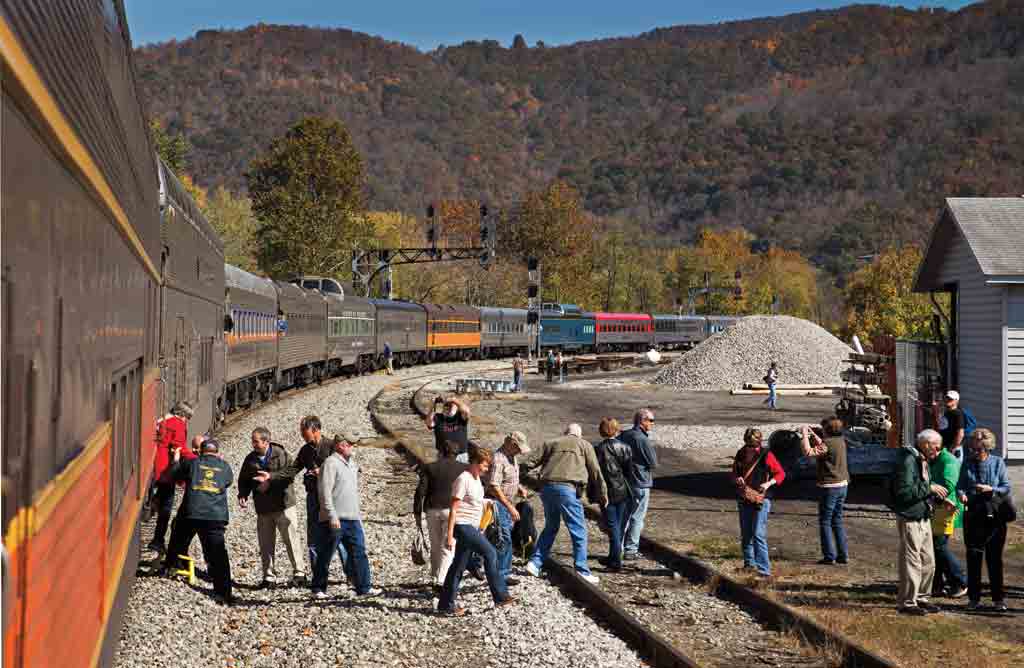 On Friday, the passenger railroad confirmed that new mileage rates will require private car operators to pay $3.67 per mile per car, with additional cars costing $2.81 per mile. The rates are the second increase for private cars initiated by Amtrak this year.

New River Train officials say their budgets are already stretched, citing Amtrak’s mileage rates and elimination of Huntington, W.Va., as a switching point, the excursion train’s originating location for its trip to Hinton, W.Va. Eliminating Huntington as a switching point required the non-profit New River Train to pay for a costly equipment deadhead move between Chicago and Huntington and return. The train runs 30 cars long.

After Amtrak announced it was exiting the charter and excursion business in early 2018, the October New River Train was the only Amtrak excursion train to operate in 2018 and it only came about after U.S. Sen. Joe Manchin, D-W.Va., stepped in. He says the train con-tributes about $5 million annually to the West Virginia economy.

Additionally, the excursion train operator is concerned about Amtrak changing terms and rates at its discretion, making it difficult to plan excursions when the railroad has the ability to change those conditions with only 60-days notice.

News Wire examined the verbiage associated with various addendums to the passenger car tariff. In Addendum No. 5 taking effect Oct. 1, 2017, which included mileage rate increases, Amtrak said its rates were being adjusted based on the “AAR quarterly index of charge-out prices and wage rates,” saying the rate adjustment will be effective on Oct. 1 of each year.

But less than one calendar year after making that announcement, Amtrak issued two additional rate changes, one taking place May 1, 2018 and another proposed for Jan. 1, 2019. In Addendum No. 6, which took effect May 1, Amtrak omitted verbiage that references the AAR’s quarterly index prices and wage rates – replacing it with the following statement: “Amtrak reserves the right to change the terms and rates contained herein at any time. Private car moves confirmed prior to any such changes will be honored at the rates contained in the confirmation.”

For the New River Train, these unexpected price increases and the inability to pinpoint future costs is likely to put the excursion train out of business.

“We feel like we aren’t customers any longer,” Rosenthal says. “Price increases and limiting how and where we can make our moves with just 60-days is disappointing considering we’re customers who contribute to Amtrak’s bottom line.”

Rosenthal wants Amtrak to explain rate increases to allow the private car industry and rail-road to allow the two groups to work together and to identify areas of cost savings.

“Not only are we Amtrak customers, but we’re supporters and we’ve always had a good working relationship with Amtrak that allows us to tweak our business and work together with the railroad,” he says.

“I don’t think any other business with a monopoly like Amtrak would have the capabilities to increase its rates as drastically as what we’ve experienced with Amtrak in less than 12 months,” Rosenthal adds.

News Wire reached out to Amtrak to ask the passenger railroad how it calculates its car rates, what scales or models are used, and to explain why private car rates have increased twice in a 12-month period.

“The guidelines for private cars on Amtrak indicate that Amtrak’s primary objective is to operate its core scheduled train service safely, punctually, and efficiently. We participate in non-core services such as private cars if they provide a positive financial contribution to the bottom line, provide strategic value, and don’t distract from or impede our core activities,” Amtrak spokeswoman Kimberly Woods tells News Wire.

“The recent price increases and adjustments to terms and conditions support these require-ments and incorporate suggestions and improvements proposed by the leadership of the major private car advocacy organizations,” Woods adds.

News Wire reached out to the Railroad Passenger Car Alliance for comment on involvement with Amtrak and private car policies, to which RPCA President Roger W. Fuehring declined comment and directed Trains to the organization’s most recent newsletter. In the newsletter, Fuehring confirms Amtrak did recently invite him to visit Philadelphia to discuss policies regarding the movement of private cars, car inspector requirements, and insurance requirements, as well as safety, rates, and fees.

Fuehring says the conversations were well received and there were several suggestions, revisions, and verbiage that was removed, added, or better defined.

“It’s crucial to understand that several employees of Amtrak have worked very hard to develop a policy within the parameters set forth by the management of Amtrak. The goals set forth included efficiencies within the network, cost, risk management, labor and availability of equipment,” Fuehring’s letter.

“It may not be the desired outcome, and some owners will follow others in shutting down their operations based on cost,” Fuehring says. “For others, they will take the time to evaluate the new parameters and develop their operations accordingly.”

Rosenthal says these price increases and new adjustments will require the organization to increase its ticket prices, which he believes would price them out of the market and result in less ridership. Coach tickets are currently $179 per person; premium seats are $279; and business class is $600 per person. Currently, about 4,800 passengers ride the New River Train during its four day-long excursion dates each October.

New River Train, an arm of the C.P. Huntington Chapter of the National Railway Historical Society, declined to share costs or its agreement with Amtrak, but the group did confirm that despite these challenges, it is still making its request to operate in 2019.