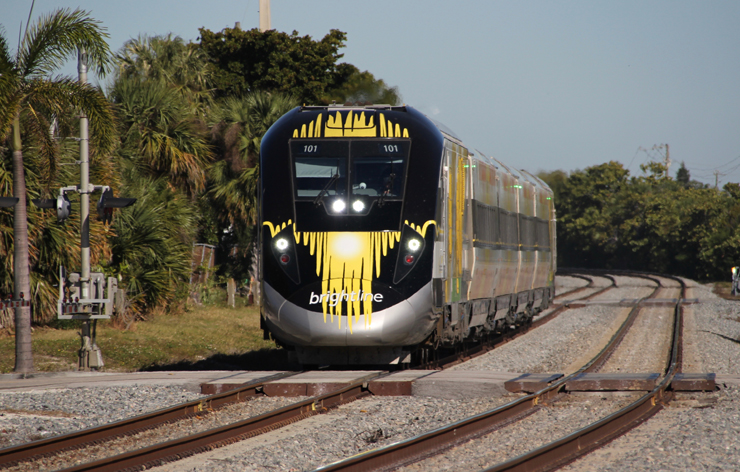 A Miami-bound Brightline train speeds through Lantana, Fla., on Jan. 10, 2019. The initial public offering for the passenger operation, to be rebranded Virgin Trains USA, is set for Feb. 13.
TRAINS: David Lassen

The “Upcoming IPOs” portion of NASDAQ’s website says shares are pegged to open between $17 and $19 under the symbol “VTUS.” The company expects to offer 28.334 million shares, which NASDAQ says translates to an offer amount of up to $619.1 million. Money from the stock sale would provide only part of the nearly $2 billion for the expansion of service to Orlando, Fla. That project requires an upgrade of Florida East Coast Railway tracks to 110 mph from West Pam Beach to Cocoa, Fla., and a new 125-mph “sealed corridor” segment west of Cocoa to Orlando International Airport.

Virgin Trains USA’s Securities and Exchange Commission filing reveals that the company is “in discussions with potential lenders, other potential financing sources, and advisors regarding a debt financing of up to $2.3 billion … to complete the construction of the North Segment and other uses.” These include land acquisition and construction expenses for proposed Orlando-Tampa and Las Vegas, Nev., to Victorville, Calif., extensions; Brightline-to-Virgin rebranding expenses; purchasing more rolling stock from Siemens; and investing in additional signaling and positive train control upgrades to the now-operating Miami-West Palm Beach portion of the route.

Indian River County not only is appealing that ruling, but on Jan. 16 filed another lawsuit claiming that it should not have to continue paying for highway crossing maintenance because its decades-long maintenance agreements are technically with Florida East Coast Railway, and Virgin Trains/Brightline cannot be considered a third-party beneficiary. The TC Palm newspaper website reports crossing maintenance has averaged $235,000 annually since 2011, but attorney Dylan Reingold says those fees could rise with higher-speed trains and taxpayers will be on the hook.

These legal actions will add to the $8 million of public money that two Florida counties and an advocacy organization have already spent trying to fight Brightline. While Indian River refuses to negotiate infrastructure improvements and other mitigations, the other two entities, Martin County and Citizens Against Rail Expansion (“CARE Florida”) reached agreements with the passenger operator that prompted them to drop further litigation.

Meanwhile, Florida Development Finance corporation reports for fourth quarter 2018, the first in which the company had ramped up frequencies between West Palm Beach and Miami, reveal that the company carried 238,749 passengers on revenue of $4.7 million. The totals increased from about 60,000 travelers in October to 98,000 in December, while monthly revenue more than doubled over the period.