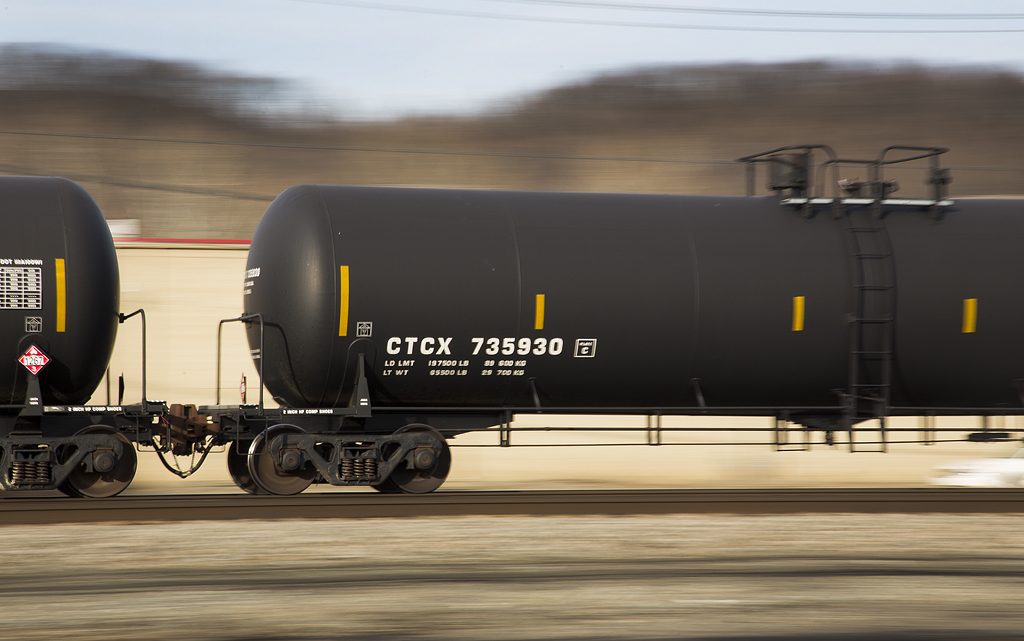 Crude oil loads from the Bakken oilfields of North Dakota roll through St. Albans, W.Va., enroute to Yorktown, Va., in April 2014.
Chase Gunnoe
WASHINGTON — A Transportation Research Board committee on Oct. 5 reported that results were “inconclusive” in a year-long study of the effectiveness of electronically controlled pneumatic brakes to reduce the risk of derailment and fire in a train carrying flammable liquids.

The report will inform government and industry adversaries in a years-long struggle over the mandatory use of ECP brakes, but it’s not likely to end the debate. Derailments involving tank car trains hauling crude oil and other flammable materials have become a political as well as safety issue, with several local governments attempting to ban tank car trains in their jurisdictions.

In May 2015, the Federal Railroad Administration published a rule requiring ECP brakes on tank car trains. The railroad industry challenged the rule, and in December 2015, in a section of the Fixing America’s Surface Transportation Act, Congress ordered the Government Accountability Office to examine the FRA results.

The FRA supported the ECP brake rule with data from a computer model that showed the brakes could reduce the effects of derailments and tank punctures by 20 percent. The Association of American Railroads and the Railway Supply Institute used a different model to show that the safety benefits of the high-tech brakes was “marginal,” according to the Government Accountability Office. The government watchdog turned the problem over to the Transportation Research Board in October 2016.

The TRB committee looked at the FRA model, and ordered field tests to gather additional data. In the model, a theoretical train traveling at 40 miles per hour derails on a curve. Cars directly behind the motive power go off the tracks. All of the cars are the newest, most sturdy tank cars specified by the Department of Transportation, the DOT-117.

The committee report concludes that FRA’s efforts to validate its simulation “do not instill sufficient confidence” that the electronic brakes performed better than conventional systems in emergency braking situations. However, the committee’s work orders did not include making recommendations to policy-makers.