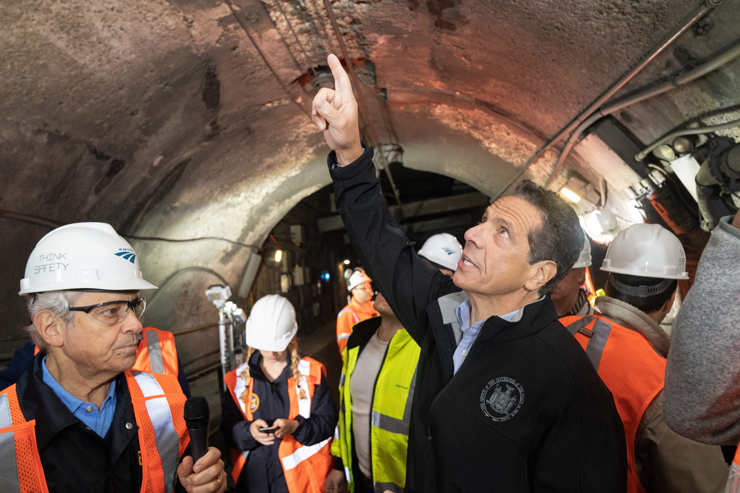 It’s a slim hope at best.

Opened for service in 1910 by the Pennsylvania Railroad, the twin tubes see 450 weekday trains and operate at peak capacity during high-traffic periods. When something goes wrong, cross-Hudson commuters and Northeast Corridor passengers are in a world of hurt.

In 2012, Superstorm Sandy flooded the 14,000-foot long tunnels, severing rail service for five days. The effects of that hurricane are still seen today.

Cuomo led reporters on a tour of one of the tubes in October, six years after the devastation left by Sandy. [See “In bid for funds, New York governor leads tour of aging Hudson tunnels,” Trains News Wire, Oct. 19, 2018.]  Saltwater had inundated the tunnels, submerging electric cables and equipment. Salt residue left after the water was pumped out continues to corrode the concrete tunnel lining and copper wiring. Rebar within the walls is deteriorating. Chunks of cement occasionally fall from the ceiling.

There once was a plan to build a new tunnel, and it predated the Sandy disaster.

Known as the ARC project, short for Access to the Region’s Core, studies, plans, and environmental reviews consumed 14 years from 1995 to 2009. Tunnel construction began in May of 2010, with funding promised from the federal government, the Port Authority of New York and New Jersey, and the New Jersey Turnpike Authority.

But the plan, which included a new station solely for NJ Transit trains adjacent to New York Penn Station, was put together without the involvement of either Amtrak or New York state. Five months into construction, then-New Jersey Gov. Chris Christie canceled the project, citing potential cost overruns.

By then, more than $600 million had already been spent. New Jersey had to repay $95 million to the U.S. Department of Transportation and forfeited $3 billion in funds awarded under the New Starts program. 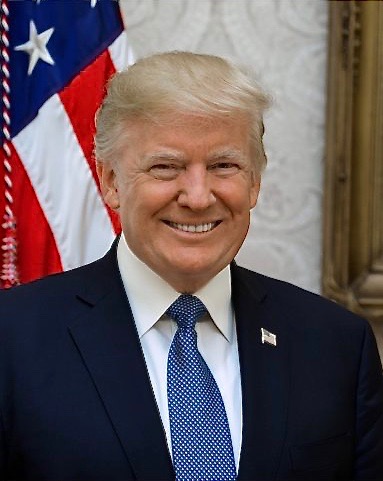 Amtrak picked up the ball the following year with a budget request calling for two new tunnels and reconstruction of the line from Newark to Penn Station, setting the price tag at $13.5 billion.

An agreement was reached in 2015 among the two states, Amtrak, and DOT to split the cost, with the federal government kicking in half and New Jersey and New York each ponying up 25 percent. The deal envisioned federal funds coming from “a combination of New Starts grant dollars, Amtrak Northeast Corridor profits, Amtrak capital funds, annual appropriations, and other similar federal sources,” according to a press release issued at the time by New York Sen. Charles Schumer.

That deal was struck under the transit-friendly Obama administration. But two months after Trump took office, he directed DOT to restrict New Starts grants to those projects with pre-existing full funding agreements only. That effectively cut out the Gateway program.

Soon, DOT was calling into question the 2015 agreement. “There is no such agreement,” wrote Jane Williams, acting administrator of the Federal Transit Administration, in a letter to New York. “We consider it unhelpful to reference a non-existent ‘agreement’ rather than directly address the responsibility for funding a local project where 9 out of 10 passengers are local transit riders.”

The project appeared doomed earlier this year when Trump threatened a government shutdown if an omnibus spending bill included funding for Gateway. It didn’t, at least by name.

Then in October, Cuomo reached out to the president, sending the White House a video from his tunnel tour. The governor was invited to lunch, joined by Transportation Secretary Elaine Chao and Chief of Staff John Kelly. Over a plate of shrimp and beef, Cuomo and Trump talked construction.

“The president got it,” Cuomo says. “He had a surprising amount of knowledge about the infrastructure projects that we’re doing in New York. Again, he has a development, construction background, so he knows these issues and he knows the questions of process and bidding and making sure the exposure is what everybody expects.”

Trump told the New York Post, “I have a good relationship with him,” referring to Cuomo. “I like him. He likes me.” The president also told reporters, “We’re going to look at it.” 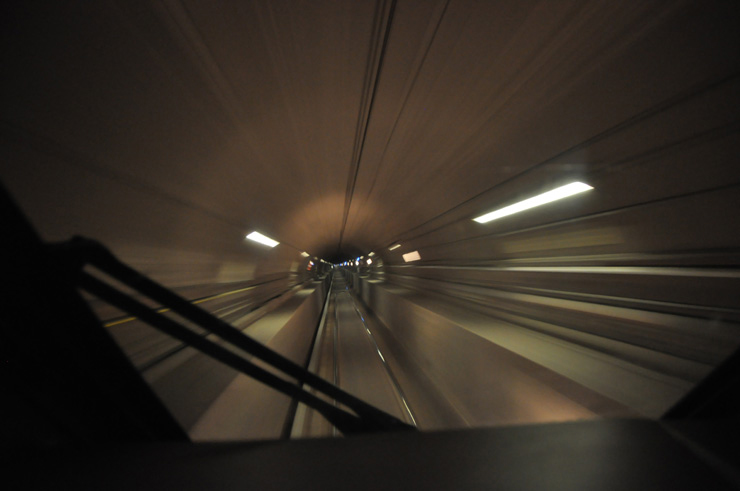 While some took that as a hopeful sign, the optimism overlooks one key fact. “Trump doesn’t have a discretionary funding pot that he can just use however he wishes,” says Yonah Freemark, who studies transportation and politics at the Massachusetts Institute of Technology.

Freemark explains that because there are limited dollars in the New Starts program, which is generally appropriated at about $2.3 billion each year, any action by the administration to give priority to the Gateway project will come at the expense of other transit projects.

Moreover, the scale of the total Gateway project is beyond the ability of these FTA grants if the federal commitment reaches the hoped-for 50 percent contribution. Amtrak estimates the cost of the full project, which includes replacing the Portal bridges, expansion of Penn Station, increasing the main line to four tracks from Newark to Manhattan, and other upgrades, at $30 billion.

“Simply the scale and cost of Gateway suggests that this may require congressional allocations of a new amount of funding to pay for the project,” Freemark tells Trains News Wire.

Democrats and Republicans alike have called for massive infrastructure spending. Freemark sees this as an opportunity: “What the states of New York and New Jersey need to be doing is asking their Congress people to make more of an effort to put the project on the congressional agenda and add it to a funding package.”

Cuomo discussed establishing a corporation with representatives from New York, New Jersey and the federal government running it. “I don’t believe Amtrak is the best vehicle to manage this project,” he told Trump. “Amtrak is in the train operation business. That is a different business than the tunnel-boring business.”

Cuomo said that the corporation would get bids from the private sector “so we know what we’re really talking about in terms of financial exposure.” It would be a public/private partnership, with government developing the master plan and the private sector making it happen.

Amtrak responded with a statement to the Wall Street Journal from Chief Commercial Officer Stephen Gardner: “As owner and steward of the Northeast Corridor, Amtrak will always remain involved in all aspects of Gateway for the benefit of the region and the nation.

Cuomo describes the new tunnels as an urgent need, with the longest lead time for construction and the greatest risk of disruption from the loss of even one of the existing tunnels.

He also sees it as an issue of national interest. But it will take more than a convivial lunch to get shovels turning.