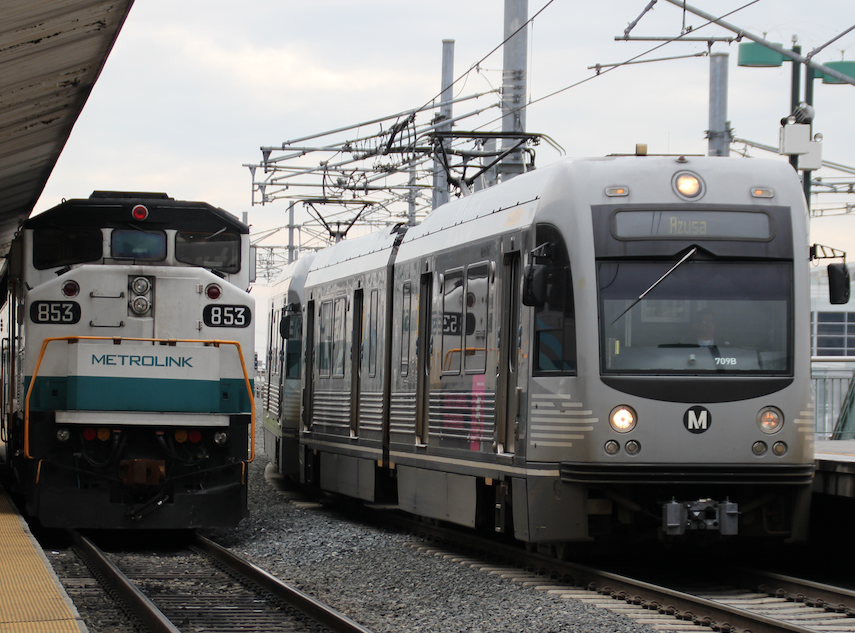 An arriving Metro Gold Line train passes a Metrolink train awaiting its afternoon departure on Feb. 21, 2017.
TRAINS: David Lassen
This article is the second of five on transit in the U.S. and North America. Read parts One, Three, Four, and Five online.

Transit agencies are beginning to see their role as greater than just getting people from station to station. Today, it’s about helping them get from door to door.

“Our job is to make the customer’s life as easy as possible,” says LA Metro’s Nadine Lee, deputy chief innovation officer. “That’s what’s going to make the system more attractive to people and more useful to them.”

In Phoenix, Valley Metro is partnering with Waymo, a self-driving automobile project — to bring riders to and from light rail stations with autonomous vehicles. Rob Antoniak, Valley Metro’s chief operating officer, explains that for now it’s a test program for employees and invited riders, “So we can prep for what it would mean to genuinely integrate a first- and last-mile scenario into our public transportation network for our customers.”

Dozens of Valley Metro employees are in the program, using the Waymo app to set up rides. Members of Valley Metro’s RideChoice program, which is open to paratransit-certified individuals and those older than 65, will also participate, and both groups will be asked about their experience with Waymo and autonomous vehicles.

“We have to be a part of these experiments and these dialogues,” says Antoniak. “If you aren’t forward thinking, then you are a company or a service that’s going to die.”

“Starting to See the Future”
Earlier this year, Denver’s Regional Transportation District began offering free rides in an electric, autonomous, microtransit vehicle. It comes courtesy of a partnership with EasyMile, whose U.S. corporate office is one of the stops on the 15-minute loop. Running weekdays from 10 a.m. to 6 p.m. to the 61st and Peña commuter rail station, the shuttle stops at a park-and-ride lot and one other business and a residential location.

There’s an onboard representative but no driver. Nor is there a steering wheel or foot pedals. Laurie Huff, spokeswoman for RTD, says she’s fascinated by it and so are the riders.

“People haven’t seen anything like this before,” Huff says.

The 12-passenger shuttles, which include automatic wheelchair ramps, follow a pre-programmed route at up to 15 mph. EasyMile says this is their first operation in a transit setting in the U.S., but more than 100 of these same vehicles are in use in 23 countries around the world. They’ve accumulated 300,000 accident-free miles.

Lauren Isaac, director of business initiatives for EasyMile, says she sees growing interest from transit agencies, who view the self-driving shuttle as “a great opportunity to feed additional ridership into the transit system.”

Denver RTD is developing a first- and last-mile strategic plan, with public input, to better connect riders on both ends of their transit journey.

“Transit providers are working to figure out how we give the public the options that they deserve and they expect,” says Huff. RTD sees Uber, Lyft, and other transportation network companies not as competition, but as complementary to transit.

In Denver and some other cities, the Uber app offers public transit as an option, and Lyft’s “Nearby Transit” feature shows transit connections and schedules.

“Many of our most popular pick-up/drop-off spots are adjacent to public transit stations,” Lyft spokeswoman Lauren Alexander tells Trains by email.

“We’re also starting to see the future,” says Sound Transit’s Matt Shelden, deputy executive director of planning and innovation. “Having space to accommodate those modes as they connect people to and from transit is going to be really important.”

Both Sound Transit and LA Metro have partnered with Via to provide shared shuttle rides to and from certain stations. The programs are partially funded by Federal Transit Administration grants awarded as part of its Mobility on Demand Sandbox program. Sandbox is a term used in modern technical research, to denote an area or method of testing ideas in a relatively safe way.

“Mobility on demand is really about the commodification of transportation services where the user makes a decision based on a number of trip attributes,” says Adam Cohen, a researcher at the Berkeley Transportation Sustainability Research Center at the University of California, Berkeley.

Scheduling, travel time, cost, and convenience all play into an individual’s choice of how to get from place to place. The FTA’s program, by enabling real-world testing, provides information on how these new services can integrate with traditional transit systems.

One-App Transportation
Researchers like Cohen also see a future where transportation is by subscription. It’s called mobility as a service (MaaS) and is already available in Helsinki, Antwerp, and Birmingham, England. With a single app from Whim, users access public transit, taxis, rental cars, and bicycles. One monthly subscription fee gives unlimited use across these services.

In the American Public Transportation Association’s 2018 Mobility Survey, three-quarters of the Millennial generation survey respondents said they would use a MaaS app and 28 percent said it would make them more likely to take public transit.

However, because payment systems among separate transportation providers are not standardized, integrated fare payment may be slow in coming.

Some transit agencies in the U.S. are beginning to address that. Dallas Area Rapid Transit continues to add mobility options to its GoPass app. In addition to mobile ticketing for multiple regional transit systems, the app now integrates DART’s on-demand shuttle service, GoLink, as well as Lyft rides and Bird scooters. Users can also schedule an Uber Pool ride for as little as one dollar to any DART station within a zone.

At the same time, changes are underway for the transit station itself. Once just a place to get on and off the train, stations are being built and rebuilt to serve as commercial and residential anchors in walkable, dense, urban areas.

A glimpse of that future is emerging at LA Metro’s Willowbrook/Rosa Parks station, currently undergoing a major redesign and renovation. When it reopens later this year, the station will feature a new civic plaza, better connecting it with the wider Willowbrook neighborhood.

The station is one of seven selected by LA Metro as part of its demonstration program to develop transit oriented communities. Following specific guidelines, the program aims to create economically vibrant, walkable areas through better access to transit. 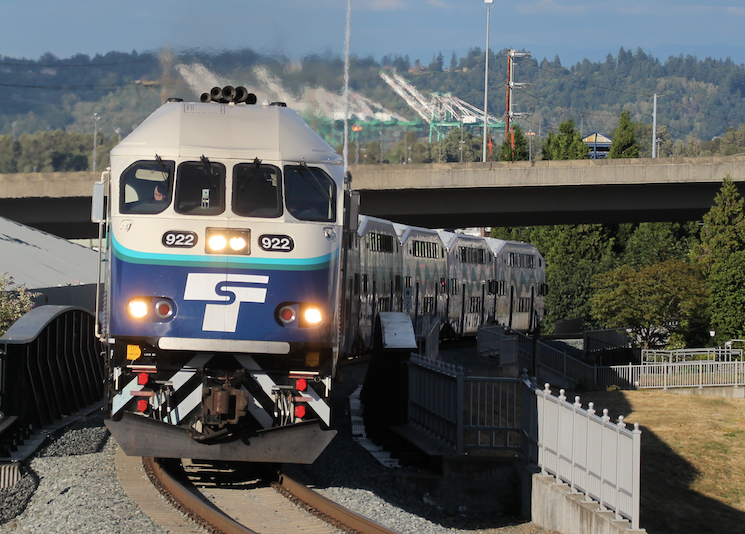 A southbound Sounder climbs out of downtown Tacoma, Wash., on June 25, 2018.
TRAINS: David Lassen
Living and Working Closer to Transit
If a city’s goal is to get people out of their cars and onto public transportation, then building residential communities and affordable housing near transit stations is essential. Sound Transit is putting that aspiration into action.

When the agency has surplus land, Shelden says it actively seeks opportunities for transit-oriented development.

“There is strong interest in this region in leveraging the huge investment in regional transit to see if we can do a better job of getting people to live closer to where they work and closer to their transportation options.”

For example, the Link light rail station at Capitol Hill is just four minutes from downtown Seattle. Sound Transit is working with partners to overbuild the station with a mixed-use development that will include 428 apartments, including 178 affordable housing units.

Last year, the FTA awarded $16.6 million in grants to 20 organizations in 15 states for transit-oriented development planning. Among the largest individual grants is $2 million to the Maryland Department of Transportation for development along the 16-mile Purple Line light rail project and $1.5 million to the Chicago Transit Authority for transit-oriented development planning on its proposed Red Line extension. Florida gets $3 million split among three transit authorities.

Tying residential development to transit stations not only allows people to get to work without relying on a stuck-in-traffic automobile, it opens access to jobs for those without cars.

“There are a lot of people who might like to work but they’re having trouble getting to work,” says Beth Osborne, director of Transportation for America. TOD has the potential for “connecting low income people to the region’s jobs by transit so that they can work and become productive members of society.”

Cities drove 93 percent of economic growth in the U.S. over the past two decades, adding more than 32 million jobs. By 2046, according to a recent report from the United States Conference of Mayors, 127 metropolitan areas in the U.S. will see their population grow 25 percent or more.

It will get a lot more crowded in the Valley of the Sun, as the Phoenix-Mesa-Scottsdale region adds more than three million people, an increase of 67 percent. Dallas-Fort Worth will grow 57 percent and Atlanta 48 percent. The Seattle-Tacoma area will see 30 percent growth.

Transit systems across the country will be challenged to keep up with this growth in population and employment. Meanwhile, the mobility marketplace is changing, giving consumers more choice but requiring transit agencies to rapidly adapt and increasingly collaborate. Large investments in technology and infrastructure are looming.

But, for some agencies, the immediate need is just finding the money to keep the trains rolling.