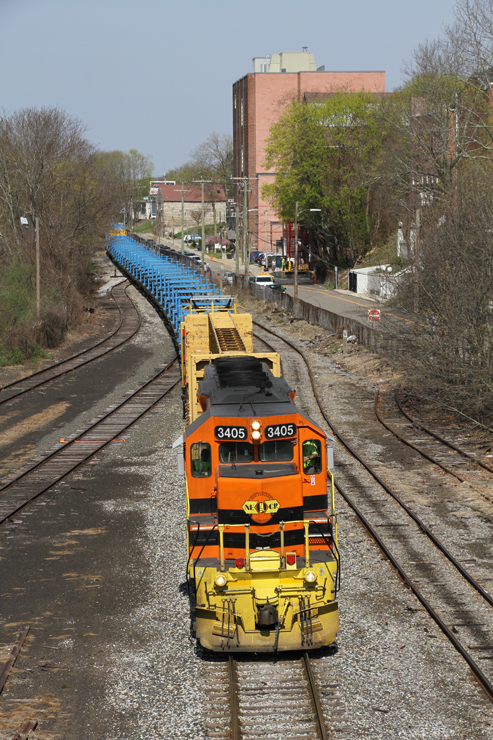 New England Central SD40-2 No. 3405 leads a welded rail train through Willimantic, Conn.,  on May 3, 2018.
Scott A. Hartley
WILLIMANTIC, Conn. — The southern 55 miles of Genesee & Wyoming’s New England Central Railroad will begin to handle industry-standard 286,000-pound freight cars later this year, thanks to track improvements made possible by a joint federal and private partnership.

The original $8.2 million federal Transportation Investment Generating Economic Recovery grant was announced in 2014 as one of several freight grants awarded through the Connecticut Department of Transportation for freight improvement projects in the state. The railroad is contributing $4.6 million to the project.

The 328-mile New England Central, which runs from the Canadian border at East Alburgh, Vt., to the Long Island Sound deep water port at New London, Conn., had been Canadian National’s Central Vermont Railway subsidiary until its sale to RailTex in 1995. It is now a Genesee & Wyoming property. NECR’s northern end, which hosts Amtrak’s Vermonter, has received substantial upgrading and signal installation in recent years. The 65 miles of the railroad’s Palmer Subdivision between Palmer, Mass., and New London, have remained a local freight operation, with restricted weight limit for freight movements.

Genesee & Wyoming officials announced Friday that the heavier cars will be allowed over the entire route by year’s end.The 7.5 miles of new continuous welded rail will replace existing 100-pound jointed rail, mostly near Stafford, Conn., and south of Willimantic.  The project will include the installation of 15,400 new ties, replacement of 11 turnouts , 166 replacement welds on existing welded rail,  and extensive ballasting and surfacing of track. The upgrade will allow increased speeds over the 23 miles north of Willimantic, requiring the extension of 19 highway crossing circuits.