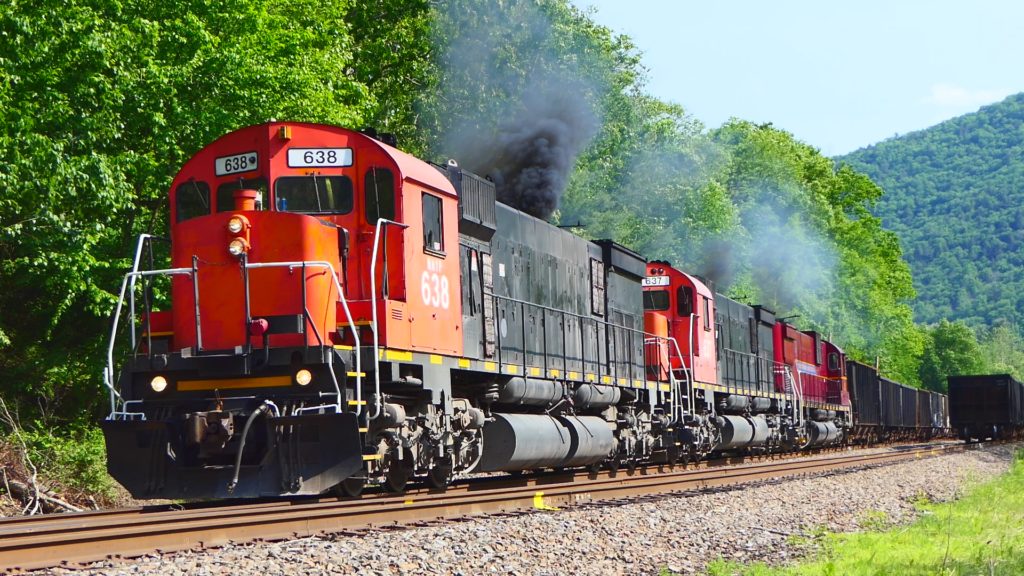 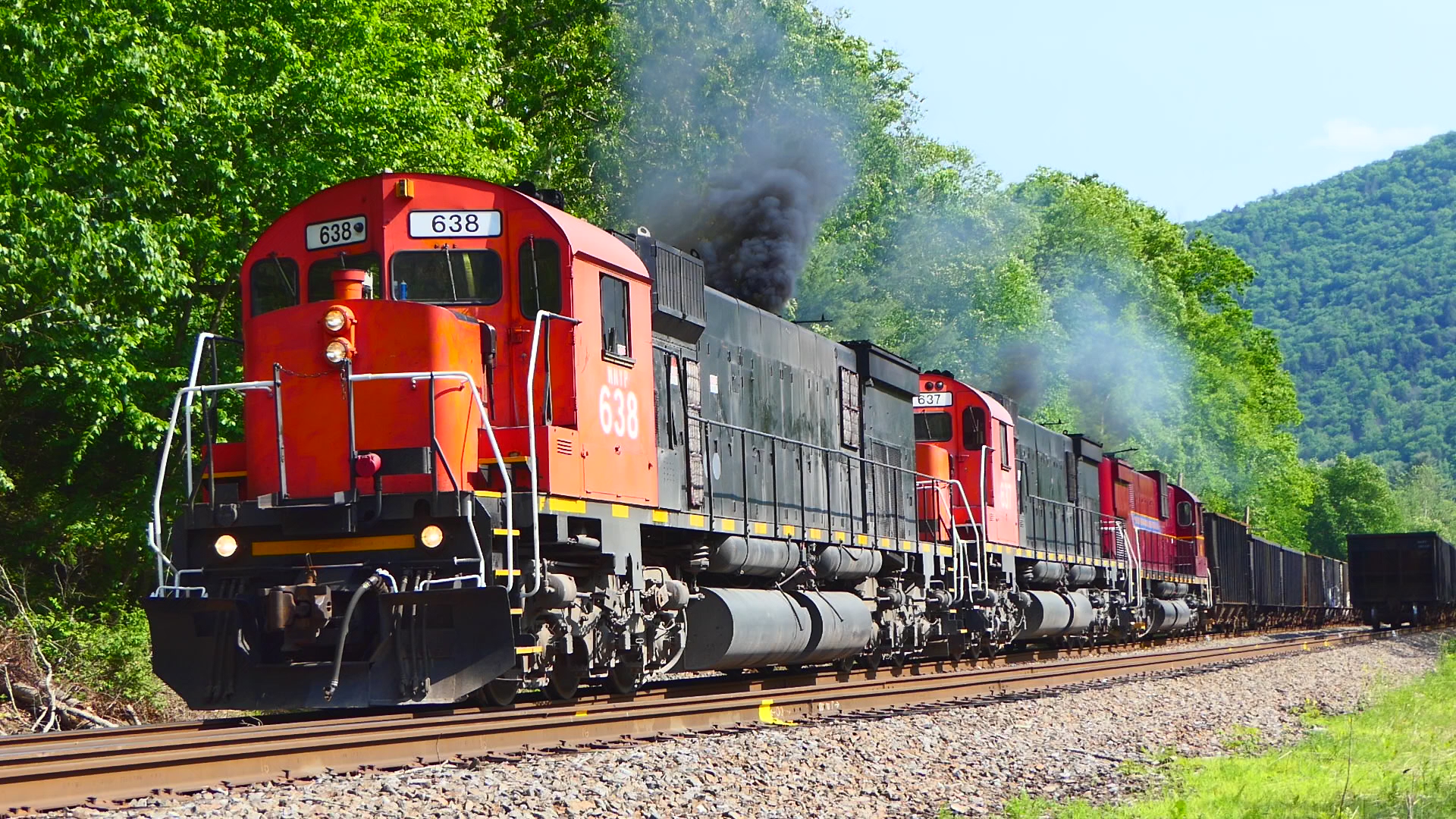 The WNY&P Driftwood Turn prepares to leave Driftwood, Pa., with a hopper train ultimately bound for Turtle Point. Despite being based in Olean, N.Y., the majority of the income for the railroad is in Pennsylvania.
Stephan M. Koenig 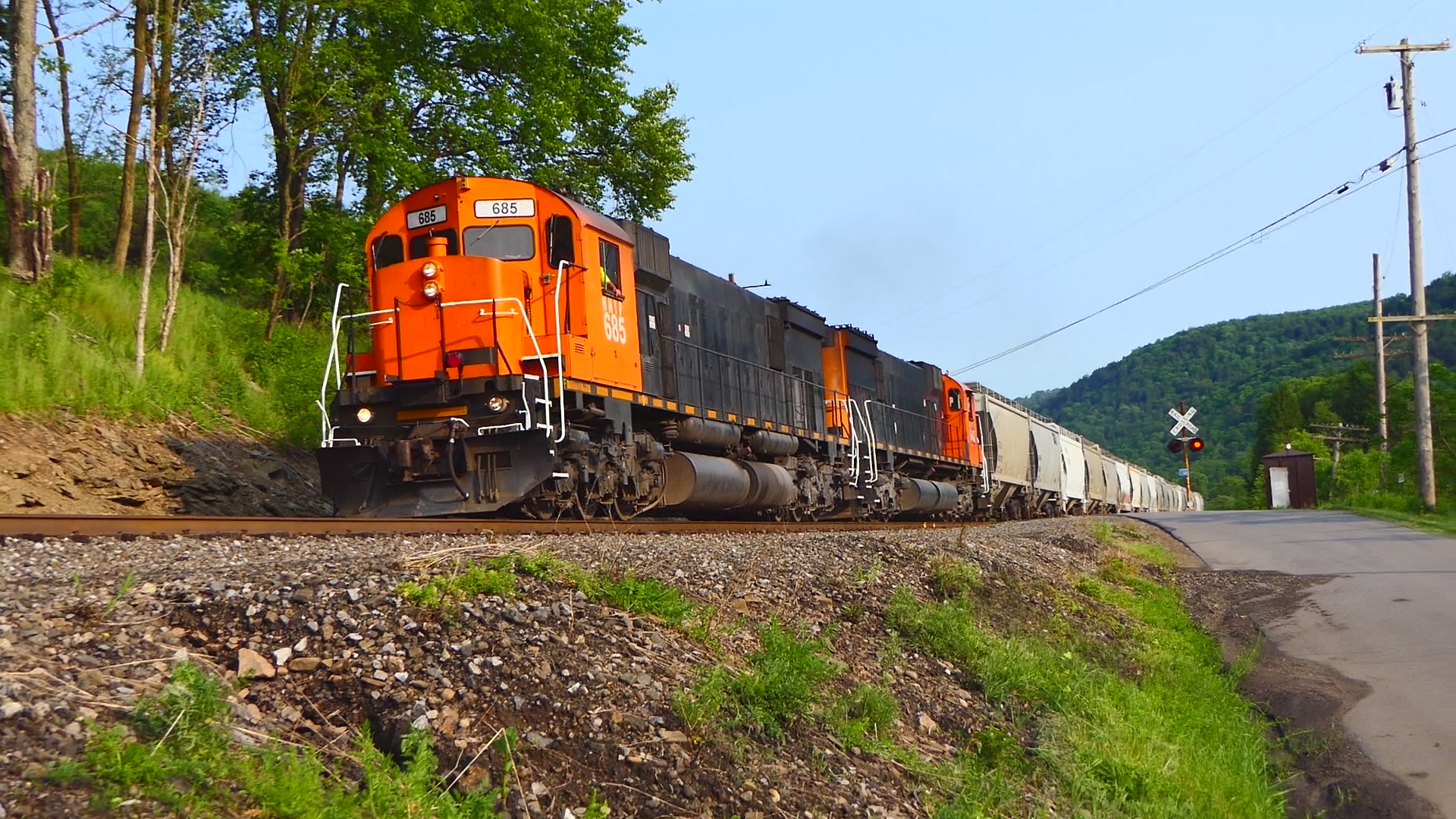 The northbound Emporium Turn reaches Gardeau Road just south of Keating Summit. The train will make its ascent across the location that these locomotives were purchased for. Keating Summit has been the bane of operations on this railroad since it was built.
Stephan M. Koenig 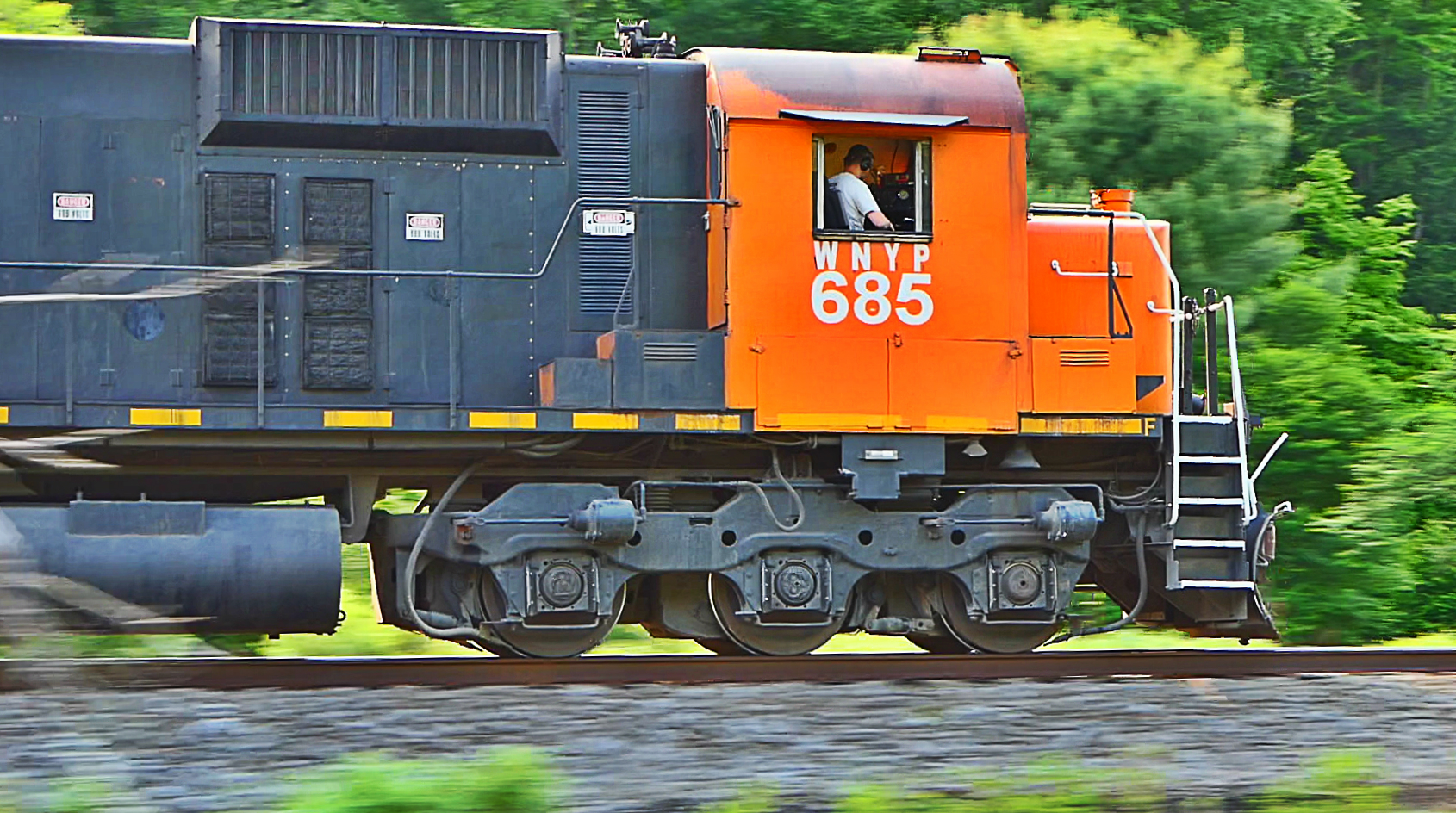 Pacing shots like these are possible along the route that follows the WNY&P but is very much recommended that a designated driver do the driving here. The roads are full of curves and traffic.
Stephan M. Koenig
OLEAN, N.Y. — Eighteen years after big Montreal Locomotive Works six-axle locomotives departed the Cartier Railway in Canada, they are exiting another railroad — as mainline power on the Western New York & Pennsylvania Railroad.

The presence of MLW C636s plus one C630 (WNY&P No. 630) on the regional railroad has been likened to a modern trucking company operating Studebaker trucks — in this case the rarest of the Studebakers. It made the WNY&P unique and a worthwhile pursuit away from the busy main lines and fleets of virtually identical locomotives. Now, as in 2002, their reign will come to an end by the end of this summer.

The WNY&P runs its big MLWs on the former Pennsylvania Railroad Buffalo Line connecting Buffalo with Harrisburg, Pa., and specifically running between Machias, N.Y., and Driftwood, Pa., because of Keating Summit on the Pennsylvania side of the line.

Keating’s steep grade, almost in the middle of the WNY&P operation of the Buffalo Line, was spectacular in past operations but more so with the big 251 motors working hard over its summit. The former Pennsy line crosses the former Erie main just outside of Olean, N.Y. Occasionally they do head west to Salamanca and even Meadville, as needed.

HOW TO SEE THE WNY&P’s six-axle locomotives:
By now, you may be contemplating a visit before it is all over. I would suggest you do so, but keep in mind that the railroad is not visitor friendly, as it once was. So be aware, and be respectful.

The best thing is to get to the shop off of Constitution Avenue in Olean, N.Y. — the city where the old Pennsy main crosses the former Erie Railroad main line — and park on the public road by 7 a.m. and see what is happening. The Driftwood turn, the most coveted train on the railroad, is the longest distance train. It will only operate as needed, but still runs as many as three times a week. There is a Fairfield Inn located next to the WNY&P a short distance away, which makes for a great base of operations.

Trains heading west out of the yard will either go to Salamanca or Falconer, N.Y., to meet the Meadville, Pa., turn. The Salamanca turn operates more frequently. Eastbound power out of the shop will head usually south on the Buffalo Line. Four-axle units will work the Farmers Valley Branch and the industry at Port Allegany, Pa., while the six-axles will be assigned to the Emporium, Pa., turn and Driftwood Turn.

On special days both trains will run. Sometimes they will combine. Either way it can be a spectacular show. The diamond with the former Erie and the station in Olean can be good locations but it is always best to follow Route 417 (Olean-Portville Road) out of town to the south to Route 305 (Portville-Eldred Road) in Portville, N.Y. Just about where the WNY&P crosses the road it turns into Route 446. This is one of the best parallel road locations on the route. There are many locations and landmarks to frame shots with as you follow the trains. Route 446 will split off to Farmers Valley but then the WNY&P to Driftwood will continue along Route 155. Make sure to stop in Turtlepoint as this is where most cars for Driftwood end up. With a new frac sand operation to be opened up there it will just become busier, make sure to stop at Carlson’s store there too, it was made famous when scenes of the movie Unstoppable were shot there in 2008. I particularly love the vintage but in service mailbox outside.

Further down the line you will pass Port Allegany where there is a glass works there. Occasionally the big Ms work there but it’s recently the domain of the smaller units on the Farmers Valley turn. Further south where route 607 joins into the 155 from the north is Keating Summit.

Unfortunately, the bridge, appropriately known as Railroad Bridge Road, was removed recently so photos of the actual summit would require some light hiking off of 155 and Gardeau Road on the other side. Further to the south is Emporium, Pa. The Emporium turn will work the frac sand transloading operation there. Switching out cars can take hours so it usually end up being its own job. Occasionally the WNY&P will use four-axles for this job.

There is also an out-of-service signal bridge there right next to East Allegany Road, the main road in town. It makes for dramatic photos.

From there, Route 120 will take you through the rugged terrain that made this route interesting and to the railroad a pain to operate for the former owners. A lot of scenic areas to shoot action along the way including a few interesting bridges. At Driftwood is a small yard where the WNY&P, NS, and the Buffalo & Pittsburgh interchange.

Because the B&P interchanges with the WNY&P at other locations, this connection is used as-needed, but on occasion it is possible to see trains from all three railroads here. Route 120 becomes Main Street in Driftwood look for Railroad Street as the furthest point the WNY&P train will operate. Most of the yard here is inaccessible, and interchanging here can take some time. The best thing then is to retrace your route again north and watch the show.

This summer, the WNY&P six-axle Montreal-built Alcos are the greatest show on rails. Enjoy it while you can.