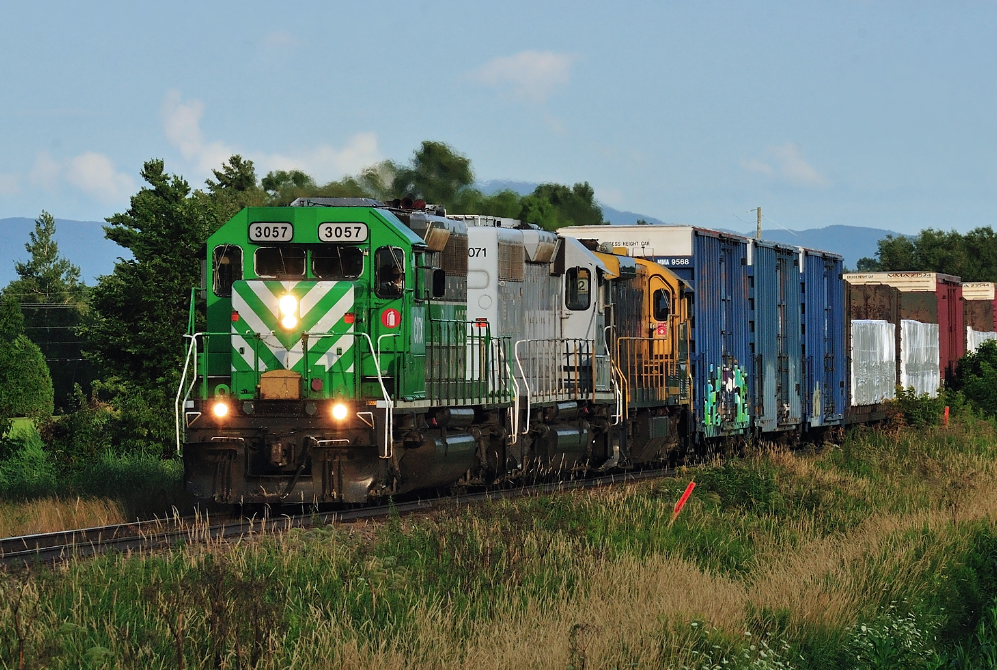 The Central Maine & Quebec train No. 1 is seen westhbound heading towards Farnham, Maine, at sunset. The Central Maine & Quebec Railway is a Class III freight railroad operating in the U.S. states of Maine and Vermont and the Canadian province of Quebec.
Frank Jolin
ROCKLAND, Maine – The Maine Department of Transportation confirmed Wednesday that the state has awarded a contract to operate freight service on the former Maine Central Rockland Branch to Central Maine & Quebec Railway. Department spokesman Ted Talbot told the Rockland Free Press that the state received two proposals to operate the line, which runs from Rockland to Brunswick. All four committee members scored Central Maine the highest. The department will soon begin negotiating a 10-year lease with Central Maine, and an operating agreement is scheduled to begin Jan. 1, 2016. Central Maine took over operation of the former Montreal, Maine & Atlantic Railway in June 2014.

“The [Central Maine’s] management and operating team have vast railroad experience from around the country in operating and growing multiple short line railroads,” said Talbot. “So we believe that they as an operator provide the opportunity to best serve the businesses in that region as well as to grow freight traffic on the Rockland Branch.”

Currently, Maine Eastern Railroad, a subsidiary of New Jersey-based Morristown & Erie, runs freight and a seasonal excursion passenger service on the state-owned line. While the new contract is only for freight, Talbot said Central Maine did agree to “accommodate and prioritize a passenger rail operation” and could conceivably coordinate continued passenger service with Maine Eastern.