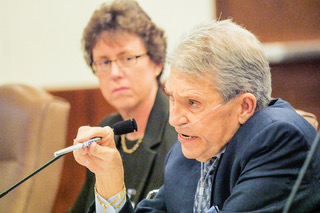 JACKSONVILLE, Fla. — The days of CSX Transportation’s hub-and-spoke intermodal strategy are drawing to a close.

The railroad aims to end container sorting at its busy intermodal terminal in North Baltimore, Ohio, by Nov. 11. And CSX will not build the Carolina Connector, a similar $270-million terminal planned for Rocky Mount, N.C., Trains News Wire has learned.

The railroad also pulled out of the long-sought project to raise clearances in the Howard Street Tunnel in Baltimore. The tunnel is a barrier to double-stack service to and from the Port of Baltimore, as well as on CSX’s Interstate 95 Corridor linking New Jersey and Florida.

The developments are part of CEO E. Hunter Harrison’s drive to improve efficiency and profitability.

The Northwest Ohio Intermodal Terminal was the second-busiest on CSX last year, lifting more than 809,000 containers — or 29 percent of all intermodal moves on the railroad. Nearly all of the volume involved sorting containers between trains, plus block-swapping.

In October, CSX began diverting traffic from the terminal by dropping intermodal service between low-volume origins and destinations both on and off the CSX system. Now CSX is focused on moving high-volume lanes away from North Baltimore, according to people familiar with the situation. It’s also moving some intermodal traffic into the merchandise network.

The Carolina Connector was not proposed as an identical twin of North Baltimore, which was built almost exclusively as a sorting hub with very little local traffic in mind.

The Rocky Mount terminal was being designed to access the fast-growing Mid-Atlantic market, and 60 percent of its volume was projected to be local traffic. The balance was going to be container sorting and block-swapping that would build the density required to serve smaller markets as part of the hub-and-spoke strategy.

Construction at Rocky Mount was set to begin in 2018. Subsequent expansion was to push its capacity to 500,000 loads annually, CSX officials had said.

CSX would not confirm that Harrison has scuttled the Carolina Connector.

It was not immediately clear whether the removal of the hub-sorting volume was a factor in killing the project. North Carolina transportation officials say they were unaware of the cancellation.

The demise of the terminal will leave a hole in CSX’s intermodal map in the Carolinas, says Larry Gross, an analyst with FTR Transportation Intelligence. Gross had applauded CSX’s hub-and-spoke strategy to gain new intermodal traffic.

Other analysts suspected that the time and expense incurred at a sorting hub such as North Baltimore reduced the profitability of CSX’s intermodal traffic. And that means it doesn’t fit into CSX’s plans.

CSX Transportation CEO E. Hunter Harrison, right, speaks to the Surface Transportation Board in October. Outgoing CSX Chief Operating Officer Cindy Sanborn is seated to Harrison’s right.
R.G. Edmonson
The $425 million Howard Street Tunnel clearance project was envisioned as a public-private partnership that would have relied on a combination of federal, state, and railroad funding.

Maryland Transportation Secretary Pete Rahn said CSX’s decision to back out was “both surprising and incredibly troubling.”

“This is an essential project for the Port of Baltimore, Maryland, and the entire East Coast,” Maryland Gov. Larry Hogan said in a statement in December 2016. “Reconstructing the Howard Street Tunnel will create thousands of jobs, open up new trade lanes for the port and improve overall freight rail service across our nation.”

CSX says the tunnel project is no longer a priority, even though the railroad would only shoulder roughly a third of the cost.

“Given the operating changes that CSX’s new leadership team has made over the last several months, and upon an updated evaluation, we determined that the Howard Street Tunnel project proposal no longer justifies the level of investment required from CSX and our public partners at this time,” says CSX representative Christopher Smith.

“Intermodal is an important part of CSX’s business and we are committed to supporting the freight rail needs of our customers and the Port of Baltimore through frequent, reliable, on-dock service,” Smith says. “This business decision is in no way a reflection on the leadership of Gov. Hogan, who has supported this initiative to the greatest degree possible on behalf of the businesses and citizens of Maryland. CSX appreciates the partnership we have developed with the state and we look forward to continuing the dialogue with our partners about our new operating plan.”

CSX had been prepared to spend $145 million, while Maryland had earmarked $125 million for the project. Maryland officials in December applied for a $155-million federal Fastlane grant, then reapplied this summer after the Trump administration changed the program requirements.

CSX said in 2016 that the project, if funded, would remove additional trucks from highways and create more than $640 million in benefits to 25 eastern states.

A spokeswoman for the Maryland governor’s office did not return an email seeking comment.

It is not clear what direction CSX will take with its intermodal network as Harrison rolls out Precision Scheduled Railroading across the system.

This much is clear: The railroad has not closed any intermodal terminals that originate traffic, despite scaling back hundreds of lanes. And CSX is relying much more on intermodal block-swapping, both to increase efficiency and to replace the sorting performed at North Baltimore.

Analysts expected the railroad to provide details on its intermodal strategy at an investor day, but the Oct. 30 event was postponed after management changes were announced on Oct. 25, including the pending departures of CSX’s chief operations and marketing executives.

The Northwest Ohio Intermodal Terminal opened to much fanfare in 2011 as the $175-million centerpiece of a new intermodal strategy that included sorting containers for Chicago interchange, as well as smaller markets such as Louisville, Ky.; Columbus, Ohio; and Detroit.

As recently as July, CSX executives said North Baltimore was a proven concept that would be extended to the Carolina Connector. Executives also had discussed the potential for adding a third intermodal sorting hub near Atlanta.

After it lifts its last container later this month, North Baltimore will survive as a block-swapping terminal for Chicago-bound traffic destined for BNSF Railway, Canadian Pacific, and Union Pacific, sources say.