Read this review from the July 2020 issue of Model Railroader 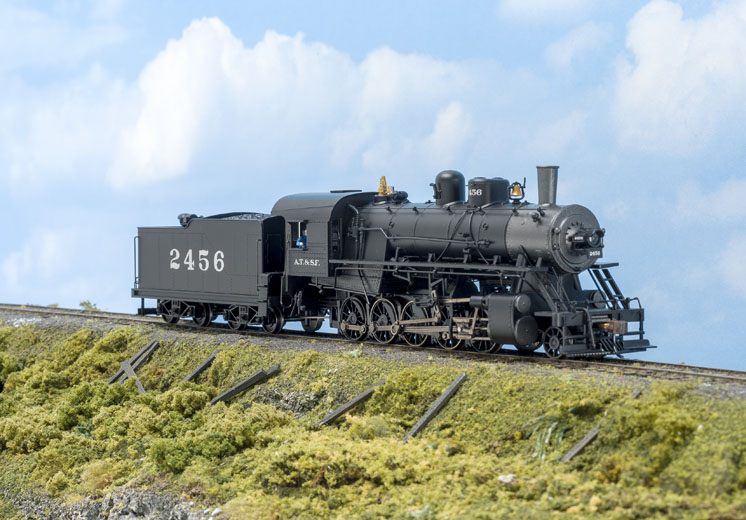 With its small drivers, open space under the boiler, and European look, a “Russian” Decapod 2-10-0 is very recognizable to most steam aficionados. We first reviewed Bachmann’s Spectrum series model of this distinctive prototype back in the April 2002 issue. Featuring the same high level of detail, this latest release of the Russian Decapod features a factory-installed Train Control Systems (TCS) WOWSound dual-mode decoder that offers realistic effects on Digital Command Control (DCC) and direct-current (DC) layouts. The decoder also includes a built-in TCS Keep-Alive capacitor circuit.

The prototype. Around the outbreak of World War I, Alco and Baldwin had received an order from the Imperial Russian government to build more than 1,000 2-10-0 decapod-type steam locomotives. Most of the order had been shipped before deliveries abruptly ended in 1918 after the outbreak of the Bolshevik Revolution.

About 200 “Russian” Decapods remained undelivered and were allocated to American railroads by the United States Railroad Administration (USRA). With 75 2-10-0s, Erie rostered the most Russians. Seaboard Air Line (40) and St. Louis – San Francisco (21) also had large fleets. More than 20 other U.S. railroads ended up with Russian Decapods on their rosters.

The locomotives had to be re-gauged from Russian standard gauge (5 feet) to U.S. standard gauge (4′-8½”). They also had their European-style couplers and buffers replaced with American-style knuckle couplers. Atchison, Topeka & Santa Fe Ry. received its three Russian Decapods in 1929 after it purchased the Kansas City, Mexico & Orient Ry. The KCM&O had purchased the locomotives (nos. 401 to 403) from the U.S. Army in 1923; the Army had been leasing them to the Wichita Falls, Ranger & Fort Worth Ry.

The Santa Fe renumbered the Russians (although not all were repainted in Santa Fe livery) to nos. 2554 to 2556. This 2554 class ran for only a few years on the Santa Fe before being scrapped in 1934.

The model. Featuring much of the same tooling as the previous release, the Bachmann model’s dimensions match those of a drawing published in the Model Railroader Cyclopedia: Vol. 1, Steam Locomotives (Kalmbach Books). The drivers are also the correct 52″ in diameter.

The plastic locomotive shell has well-defined rivet seams, boiler bands, and other molded detail. The domes, stack, and cab are separate parts. Other separately applied details include the whistle, bell, and pop valves. The handrails and uncoupling levers are separate wire parts.

The interior of the cab includes a backhead with molded gauges and firebox door details as well as separately applied throttle and brake controls. Painted crew figures man the engineer and fireman positions.

I couldn’t find prototype photos of class 2554 locomotives during their time on the Santa Fe. Bachmann gave its model the freelanced road number 2456.

However, the lettering on the model features the correct font and aluminum color of other Santa Fe steam locomotives, including the 2565 class, which were also ex-KCM&O 2-10-0s (although not “Russian”) built new in the 1920s.

The TCS WOWSound decoder and speaker are concealed inside the tender.

Mechanism. The can motor is enclosed by a die-cast metal weight inside the locomotive boiler. A drive belt connects the motor to a worm gear concealed in the firebox. This allows the model to capture the gap between the boiler and chassis characteristic of a prototype Russian Decapod.

The motor is geared to the third driver axle; the siderods transfer power to the other axles. As on the prototype, the third drivers are blind while the others are flanged to help the locomotive negotiate tight curve radii.

After removing three screws from the underside of the tender frame, I removed the plastic shell. The main printed-circuit board is screwed to die-cast metal weights attached to the plastic tender chassis. The TCS WOWSound decoder is plugged into a 21-pin socket on the main board. Sound is delivered through a downward-facing WOWSpeaker mounted on the chassis.

A six-pin wiring harness connects the electronics in the tender to those in the locomotive. The locomotive’s metal drawbar connects to a pin under the tender deck. There are two holes in the drawbar. The hole closet to the end is for negotiating curves as tight as 22″ and places the distance between locomotive and tender about a scale foot farther than the prototype. The hole closer to the cab provides closer coupling but also requires wider curves.

DCC performance. The model accelerated smoothly during DCC speed tests, as shown at left. Setting the decoder to 128 steps offers finer control. Out of the box, the speed curve is rather sharp; however, it can easily be adjusted, as can every other aspect of the decoder using configuration variables (CVs). A quick start guide is included with the model, but more extensive user manuals and an online programming tool is available for free at tcsdcc.com. This tool makes it easy to work with the indexed CVs used for tasks such as remapping functions.

Function controls are on three “pages” that are toggled by pressing function 8 twice. Page 1 has functions including the headlight, bell, whistle, and dimmer. Page 2 has the brake, brake release, and additional sound effects like the coupler. Page 3 has even more sound effects, including various whistle signals as well as ambient background sounds that can be turned on or off.

Then I set the Decapod to work on our staff layout, the Milwaukee, Racine & Troy. When I started the locomotive with a train, I heard heavy labored chuffs, at four chuffs per wheel revolution. Running light, the chuffs drifted to a whisper. The new TCS Chuffinity effect uses a multitude of prototype recordings of individual steam exhaust chuffs, instead of just recycling a few of the same sounds, for a very realistic effect.

I operated the WOWSound decoder in what TCS calls prototype mode, which features some built-in momentum and function-button controlled braking. Traditional operation, with constant chuff sounds and no momentum, is also available.

For more information on using TCS WOWSound decoders, check out my product reviews, available as online extras, at ModelRailroader.com.

DC performance. I ran the model on our DC test track with a Bachmann no. 44211 power pack. As you can see in the performance charts on this page, the locomotive required a lot of voltage to get moving, but it accelerated smoothly throughout its speed range.

The model requires filtered DC power to operate correctly. For those using older rheostat or “pulse” power packs, the easy solution is to add a filter, such as the TCS AF1 Analog Filter (available for $23.95 at tcsdcc.com).

Sound effects in DC are mostly automatic. These include incidental sounds, such as the fireman shoveling coal that sounded after I applied 8.5V to the track, and the exhaust chuffs as I advanced the throttle further. The bell sounds until about 15 scale mph. When I changed locomotive direction I heard the correct whistle signal (two blasts for forward, three for reverse, and one for stop). A quick turn of the speed control knob triggers a grade-crossing whistle signal.

With its powerful new dual-mode decoder and realistic sound system, this detailed Russian Decapod from Bachmann Trains is better than ever. 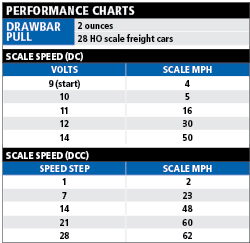