Home / How To / Prototype Railroads / What’s in a photograph?: Mountain-type F3s on the Union Pacific 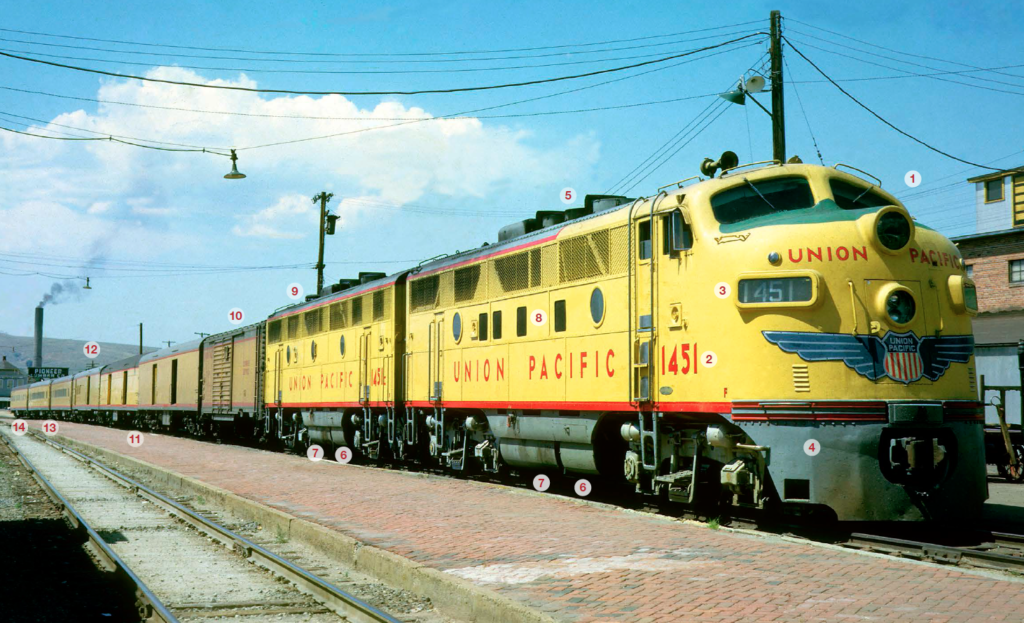 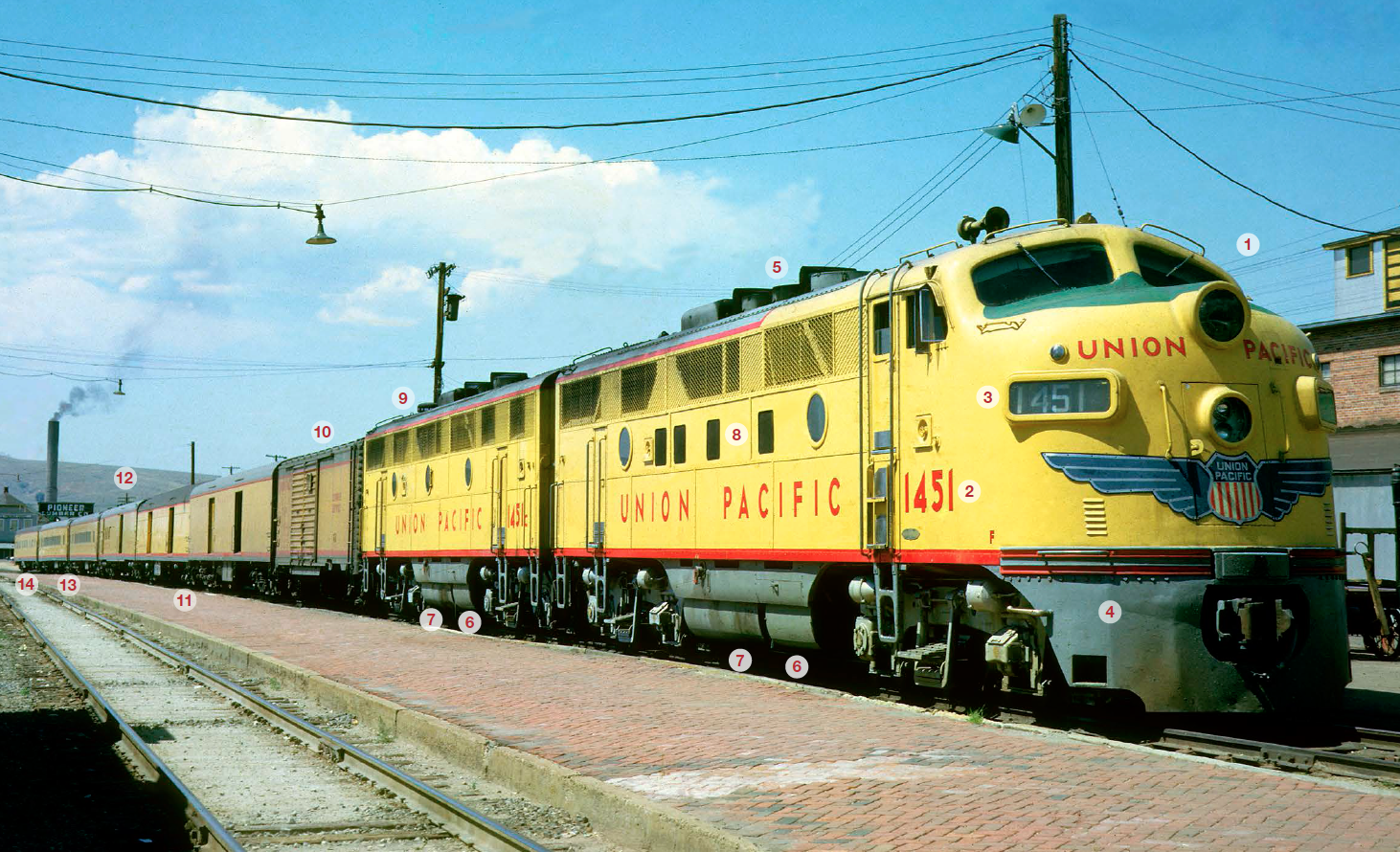 Jerry A. Pinkepank
1 “Mountain Type” F3A. Briefly in 1947, EMD referred to its steam-generator-equipped, passenger-geared F3s as “The Mountain Type.” These units were intended for use on passenger trains that traversed grades for which E7s were not suitable. In September 1947 Union Pacific got eight F3 A-B-B sets, plus three extra A units, all originally numbered in the passenger 900 series, with 56:21 (90 mph) gearing. The B units were equipped with 3,000-lb.-per-hour steam generators; the A units had none. There was a space conflict in having both dynamic braking and steam generators on F3As (and later on F7As and F9As) due to the need to put under- roof water tanks where the dynamic brake grids and blowers went, if the unit was to have the standard 1,200-gallon fuel tank. This was later solved by adding 4 feet to the body to create the FP7 and successor FP9 models.

2 Post-rebuild road number. During 1953–55, the UP’s passenger F3s were rebuilt at EMD to F7s with 62:15 (65 mph) freight gearing, but the B units retained their steam generators. The units also kept their original roof fans, dynamic brake ventilation, and upper wire screening, so externally they still looked like F3s. The rebuilt units were numbered 1451–1461, with the B units being 1451B, 1451C, etc. The view at lower right shows the start of the F7 conversion at La Grange in 1953, contemporarily with Rock Island Alco DL109 621 (“Christine”), repowered by EMD that year and visible in the background. In 1961 UP still had passenger work suitable for these units even with 65-mph gearing. This included mail and express trains in and out of Council Bluffs with trainlined steam heat, as well as trains on UP’s hilly Northwest District, like the Salt Lake City–Butte, Mont., Butte Special.

3 Number indicator box. The large number indicator boxes are as delivered in 1947, which succeeded the small ones on early F3As. UP used Northern Pacific’s station in Butte, by trackage rights 7 miles from Silver Bow. UP was still using indicator boxes on locomotives to display train numbers, but because train 35 is on NP track here, the crew has changed the indicators to show the engine number, per NP rules.

4 Straight pilot. Unlike the curved-top pilot introduced by FT No. 103, this design provided for coupler cover doors, which have been removed on 1451. There is no multiple-unit capability at the nose, as shown by the lack of m.u. air hoses hanging over the pilot and no door for a 27-point m.u. receptacle beside the headlight.

5 Tall radiator fans. September 1947 was near the end of the period when F3s were delivered with the tall radiator fan housings seen here. There are four fans. The rearmost is concealed under a “winterization hatch,” a box housing a shutter that allowed that fan’s air flow to be moderated in cold weather. The fans blow upward, pulling air through the radiators along the top sides of the carbody. Two exhaust stacks stand out between fans because of the metal screen spark arrestors that make their location obvious. The spark arrestors and winterization hatch are post-delivery modifications. Both 1451 and booster 1451C are equipped with dynamic braking, but this is not obvious on F3s unless viewed from above since the dynamic brake blowers exhausted through slots in the roof just behind the cab instead of using the large roof fan prominent on dynamic-equipped F7s and F9s.

6 Battery boxes. Battery capacity was crucial for starting EMD locomotives. Alco units of the era used air-starting instead but still needed some battery capacity for lighting.

7 1,200-gallon fuel tanks. New York Central’s passenger F3As and F3Bs, which did not have dynamic braking, had just 820 gallons of fuel capacity to allow for an underbelly water tank that combined with under-roof tanks to provide 1,180 gallons of boiler water capacity on the A units and 2,180 on the Bs. By contrast, dynamic-equipped units like 1451C could carry only 600–800 gallons in their under-roof tanks and 300 gallons in a tank directly under the steam generator, a supply that in extreme cold could be exhausted in less than 4 hours. UP, like several other roads, had boiler cars it could use to supplement the Fs’ steam-generator capacity.

8 Plain side panel. As built, this F3A had “Phase II” wire mesh between the portholes, which was removed during the rebuilding.

9 Steam generator exhaust stack. Visible just to the left of the pole behind the B unit, this feature is absent on the A unit.

10 Sealed box express car. Numbered 9151–9229, these plain-bearing cars rode on freight trucks and would not have been suitable for fast streamliner service. They should not be confused with the 100 high-speed mail-and-express boxcars UP acquired in 1964.

11 Baggage-mail-express cars. The space in these cars was used for storage mail (sacks that were not opened for sorting en route), checked baggage, and shipments of the Railway Express Agency. The cars were worked by a railroad employee (baggageman) or REA employee (express messenger) unless they were sealed like the box express cars. Loss of the mail contract in 1967 when the Post Office Department began flying all First Class mail led to the Butte Special being cut from daily to triweekly.

12 RPO-storage mail car. Used in place of full-length Railway Post Office cars on trains where the requirements for en route mail sorting were less, the RPO section was walled off from the storage area. Only Post Office employees were allowed in the RPO space.

14 Sleeping car. American series 6-section/6-roomette/4-double-bedroom sleeper; Salt Lake City–Butte. In 1962, cars American General and American View each had two sections removed and replaced with a galley providing snack and beverage service for the Butte Special. With the train’s overnight schedule, there was not a demand for full meal service; also, there was a full-length club lounge car in the train between Salt Lake and Pocatello serving the additional Portland–Salt Lake coaches and Nampa–Salt Lake sleeper that combined with the Special between Pocatello and Salt Lake.

This article was originally published in the Spring 2015 issue of Classic Trains magazine.