Home / How To / Prototype Railroads / The train dispatcher and model railroads 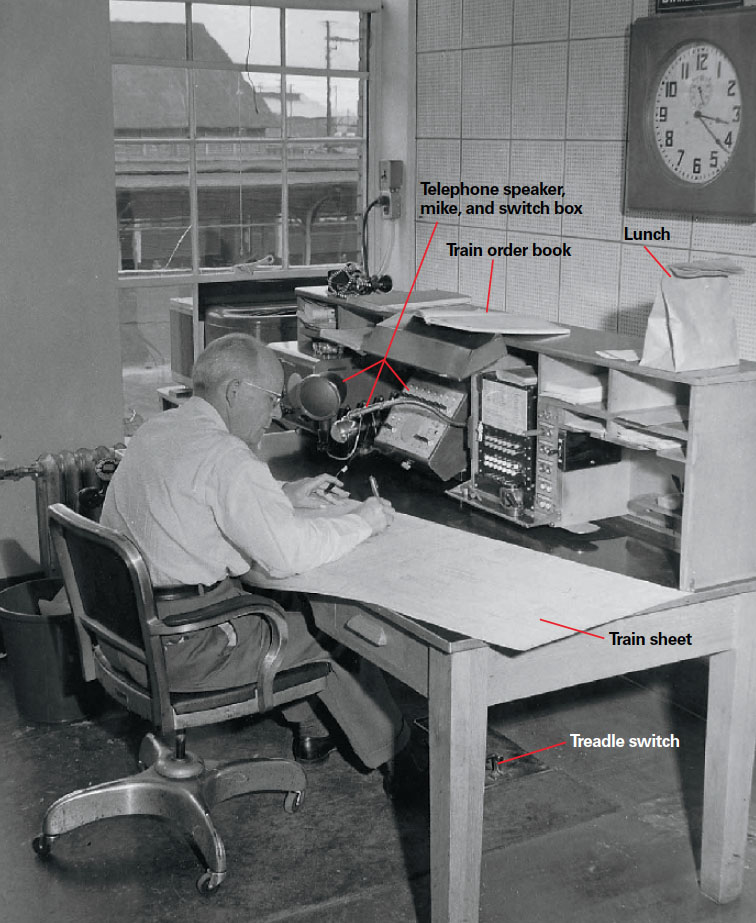 A train dispatcher supervises the movement of trains over a designated portion of a railroad and also supervises
the other employees involved in that movement. The dispatcher’s first responsibility is safety, to see that each train gets over the road without trying to occupy the same piece of track at the same time as any other train. In addition, and after safety is provided, the dispatcher is supposed to expedite train movements. The dispatcher works to help scheduled trains maintain their schedules, to run extra (unscheduled) trains as needed when other movements allow, and to see that late-running scheduled trains cause the least delay possible for other trains.
On single-track roads dispatchers are particularly concerned with where opposing trains meet. They are responsible for adjusting scheduled meeting points as needed, and for designating meeting points between opposing extra trains.

On a layout with only a couple of people running trains, a train dispatcher may not be absolutely necessary. On a small layout you can say to your friend running the other train, “I’ll meet you at Slate Falls, you take the siding.” But when you want to have more trains moving at the same time, or run them on a railroad large enough to make face-toface communication difficult, the need for a dispatcher soon becomes evident.

Besides fulfilling a useful role, a dispatcher can add a layer of enjoyment to model railroad operation. That’s because the dispatcher doesn’t run trains with a throttle, but by interacting with other people. Depending on the particular system of movement authority, the dispatcher may interact by way of written orders and instructions, by telephone or radio communication, or by signal indications controlled from a 1940s-style Centralized Traffic Control (CTC) machine or a modern desktop computer. (See “Authority to use the main track,” page 114 in both the December 2009 and January 2010 Model Railroaders.)

However it’s done, the dispatcher is mindful that instructions communicated to train crews and other operators must be clear and understandable.

Dispatching duties. Here’s a list of some of the things a train dispatcher may do on a model railroad.

• Clear trains to start from their initial terminals, either verbally, by okaying written clearance “cards” prepared by train-order operators, or by track warrants transmitted directly to train crews.

• Keep a record of movements on a train sheet, where times from “OS reports” (see “OS-ing trains,” page 130

in the January 2007 MR) are entered in timetable-like columns for each train. Besides serving as a record, the train sheet helps the dispatcher visualize where trains are on the railroad.

• Plan for and set meeting points between trains on single-track railroads, using train orders dictated to an operator, track warrants, or by setting CTC signal indications.

• Plan for and set up overtaking movements on double- or multiple-track railroads. Instructions may be transmitted by written messages copied by operators as well as by the methods listed in the previous paragraph.

• Where helpers are needed, manage the use of helper locomotives and provide for the return of helpers to their base, usually as extra trains.

• Allow time for way-freight and other online switching as needed.

And that’s just a start. It can be a fascinating job on a busy railroad.

One thought on “The train dispatcher and model railroads”