A review of the Throttlepack 9950 controller 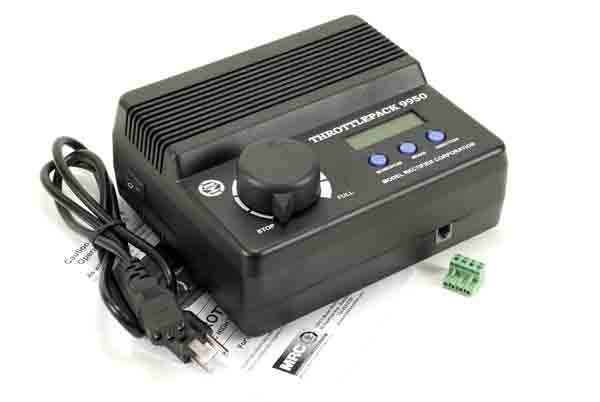 MRC’s new Throttlepack 9950 provides power and advanced features in a relatively compact package. The plastic case is 71/4″ wide x 61/2″ deep x 31/2″ high. On the left side is an on/off switch that cuts input power to the unit. On the underside is a tiny slide-switch that is used to set the maximum output power of the power pack—18V for 0-scale and large-scale trains or 15V for HO or N-scale trains. On top, the control knob occupies the left side of the box, while a 5/8″ x 21/8″ LCD screen is on the right side. Below the screen are three buttons, labeled “Momentum,” “Brake,” and “Direction.”

The primary power cord from the wall is detachable. A plastic terminal plug is supplied that fits into a socket on the back side of the box. Wires can be attached to this plug to provide power to the track and accessories—two wires (positive and negative) for track power and two for accessories. On the front of the box is a socket for an optional walk-around controller (not reviewed here). Maximum output of the unit is 125 watts. At a full 18V (assuming no accessories), a maximum of around 7 amps is available to power your trains. This amount of power should be sufficient for any single locomotive as well as lashups of up to three or four diesels, depending on load and track conditions.

An owner’s manual is provided with the power pack. This can also be downloaded from the company’s website, if you’d like to look it over it before contemplating a purchase.  The manual is comprehensive and easy to understand.

Operation is straightforward. The knob provides variable voltage to the track in 0.1V increments, up to a maximum of 18V, which should be plenty for most large-scale applications. The readout shows voltage in 0.1 increments. The “Direction” button reverses the polarity of the power to the track. An indicator on the screen notes “Forward” or “Reverse.” If the indicator says “Forward” but your train is going backward, simply swap the plus and minus wires to the track.

An interesting feature of this pack is the “Momentum” button. When this is activated, and you advance the throttle, voltage comes up incrementally, causing your train to start slowly and gradually come up to speed. With “Momentum” off, when you turn the knob, full power (based on the knob setting) is fed to the rails at once.

The “Brake” button works only when depressed. If the “Momentum” function is on, when the train is moving, pressing the “Brake” button causes it to slow gradually. When the button is released, the train will gradually resume the speed at which the throttle is set. If “Momentum” is not on, the “Brake” button cuts power to the track immediately, stopping the train. When you lift your finger, power to the track is instantly restored at its previous setting. When in “Momentum” mode, there is no “emergency brake.” However, all you need do is turn the knob to “0,” then hit the “Momentum” button to disengage that mode. The train will then stop instantly.

In operation, I found the Throttlepack 9950 to be everything it is advertised to be. It’s easy to set up and easy to use. My test locomotive was a large, double motor, USA Trains diesel. At 18V the engine drew 1.3 amps. I really like the ability to see the voltage and amperage draw at a glance.

The “Momentum” setting worked a treat. I punched the button and a little light-bulb indicator on the readout panel showed that it was engaged. Then I turned the knob to about the three-quarters mark and sat back and waited. The engine slowly started to gain speed, accelerating constantly until the maximum voltage I had set was reached. By holding down the “Brake” button, the engine gradually slowed to a stop. When I released it, it slowly resumed speed at the same rate as before.

One thing I did notice, though, is that the unit does not remember if you were in “Momentum” mode when you shut it down. The default is “no momentum,” so you must reset it each time you fire the pack up—not a big deal.

If you’re not happy with the rate of acceleration in the “Momentum” mode, you can change it using the simple procedure described in the manual. There are 31 momentum-rate steps, with “31” providing the slowest acceleration and the “0” setting being virtually the same as no momentum at all.

If you do manage to overload this unit, or if there’s a short on the line, you’ll get an indicator and the unit will shut down, while the internal fan comes on to cool it. To reset it, simply turn it off, then back on. When you turn the pack off, it takes 10-12 seconds for the screen to go dark. Also, it doesn’t come on instantly when you turn it on.

MRC’s Throttlepack 9950 appears to be a well-designed, well-made unit that should provide many years of satisfactory use indoors or out.