An update of the ballast/binder mix after two years outdoors 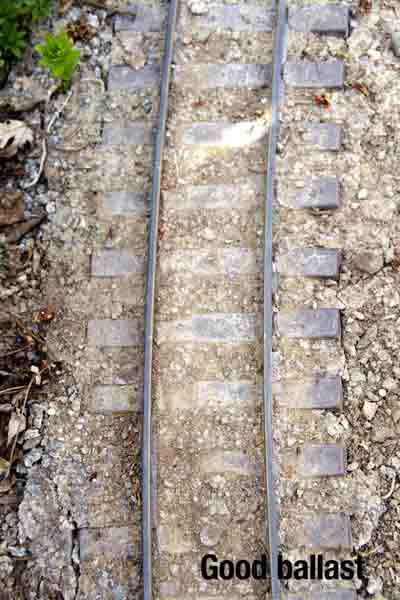 Stone ballast mixed with binder for permanent outdoor use

Pros: Prototypical appearance; easy to apply
Cons: Track must be on a solid foundation for best results—binder has insufficient strength to hold track solid by itself 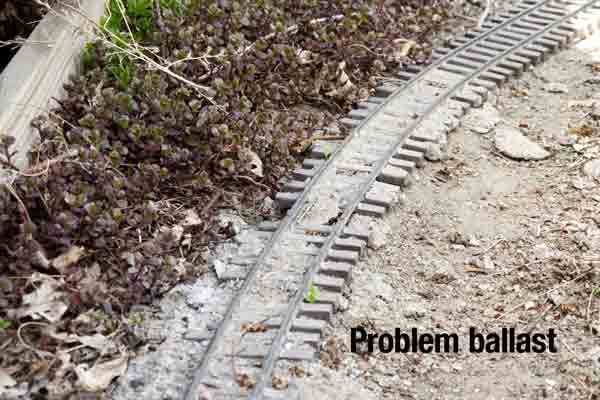 Kevin Strong
In August, 2012, I reviewed a product that was scale ballast mixed with a binder that sets up to hold the ballast together and keep the track in place. The ballast went down nicely and looked great. In that review, I wrote that I would like to see how the product held up for a season or two’s worth of freeze/thaw cycles. I’m writing this follow-up in April, 2014, so the track I tested this product on has now been through two Colorado winters. How did it do?

The instructions suggest the track be on a solid foundation; concrete blocks, well-tamped crusher fines, etc,—something that’s not going to move a lot in its own right. That, I think, is the key.

My track is laid on a solid bed of crusher fines but is attached to a 1/2″ PVC conduit that runs through its trench. The PVC by itself does not provide solid support for the track but does provide an anchor to keep the track from moving about too much.

The problem is, as I’ve discovered over the seasons, the PVC pipe has a tendency to move about on its own. Part of the reason I chose this particular section of track to test this product was because the track does have a tendency to move around, and I wanted to mitigate that. I anchored the PVC pipe as well as I could to minimize movement, then anchored the track only every so often so, if the PVC did move, it would have less tendency to take the track with it. Then I ballasted the line.

Where I made a concerted effort to make sure the PVC roadbed wouldn’t move much, the ballast/binder product has held up fairly well. It looks dirtier and dustier than it did when first applied but it has withstood the seasons and repeated trampling by my two kids and two dogs. All-in-all, I’d say it does what it’s designed to do.

On the five feet or so leading out of this test section, where the track has moved around more, the product didn’t fare so well. The failure in this instance lies not with the product—it holds together nicely—but in how the track moves relative to the foundation it’s sitting on. As the track flexes and moves with freeze/thaw cycles and thermal expansion/contraction, it has a tendency to separate (particularly lift) from its subroadbed. Once that solid foundation has eroded away, the track flexes and twists a lot more, thus allowing the ballast to break and flake off in chunks.

Overall, I think if your track is on a solid footing to begin with, and this product is laid fairly thickly (1/2″-3/4″ deep), you’ll be in good shape. If you use this in a location where natural forces tend to move the track around, hoping that the strength of the bonding agent will be more than that of Mother Nature, it’ll be a toss-up. I don’t think the strength of the product alone is sufficient to keep things in check. It’s going to need some help from below.