Home / How To / Projects / Modeling mines and quarries 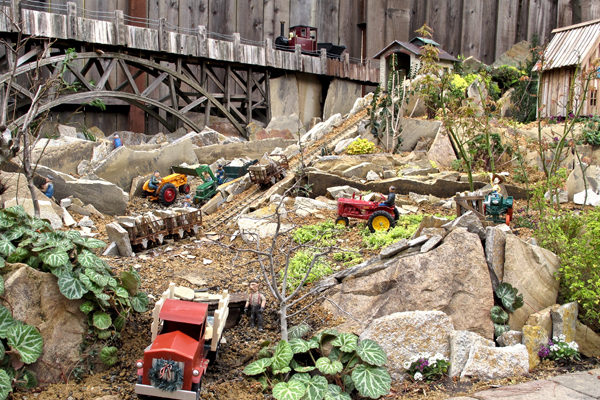 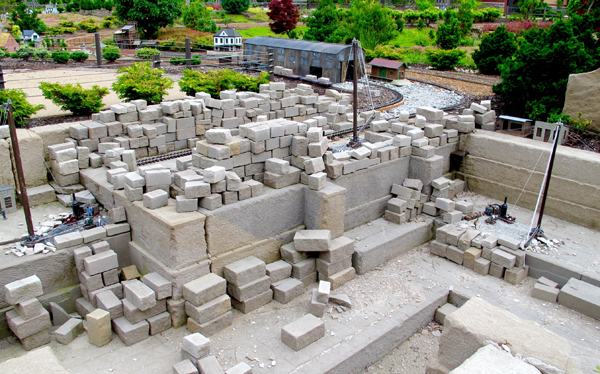 Photo 2
Taltree Arboretum’s expansive garden railway allows an industry to spread out and model a stone quarry. Two sidings from the gray warehouse curve into the quarry, where cranes load flat cars with brick-like cut stone. Elsewhere in the railway, extremely large (1:1) chunks of limestone have been imported from a quarry in Missouri.
Nancy Norris 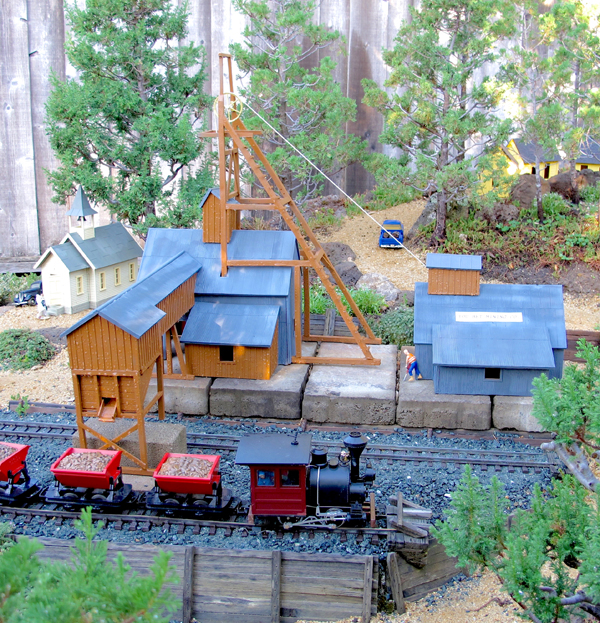 Photo 3
When Jeane and Roger Samuelsen view their garden railway, the topmost feature employs a point-to-point mine line well above the rest of Repottersville Railroad. Here, over six terraces—stepped up by walls, pavers, and a wooded (Chamaecyparis thyoides var.) field—keep track and buildings level. Miners (and garden railroaders) access it all by gravel car roads.
Nancy Norris 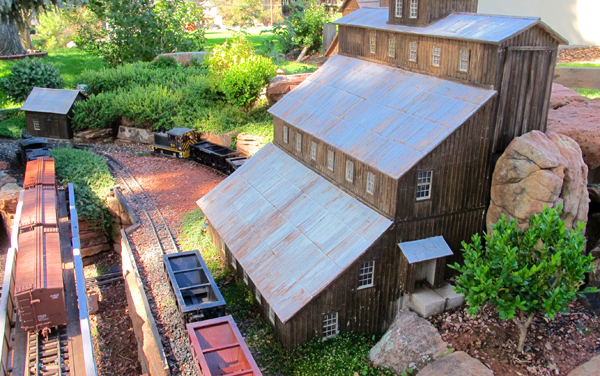 Photo 4
Doug and Ricki Mayes logically laid out railroad access for their Sparktown & Colorado mining company with two sidings for the mill next to the mainline. Red rocks surround the yard, which is covered in matching stone dust.
Nancy Norris 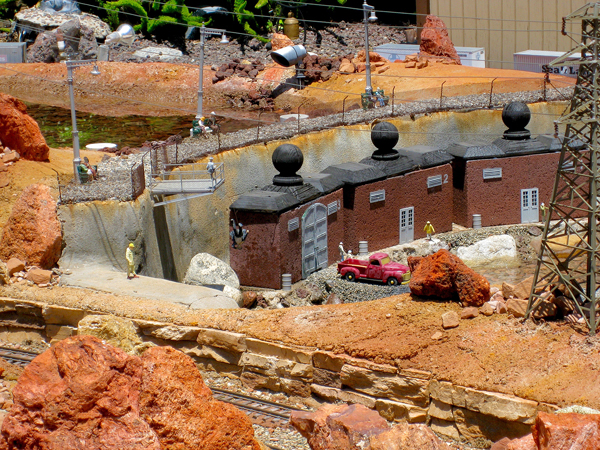 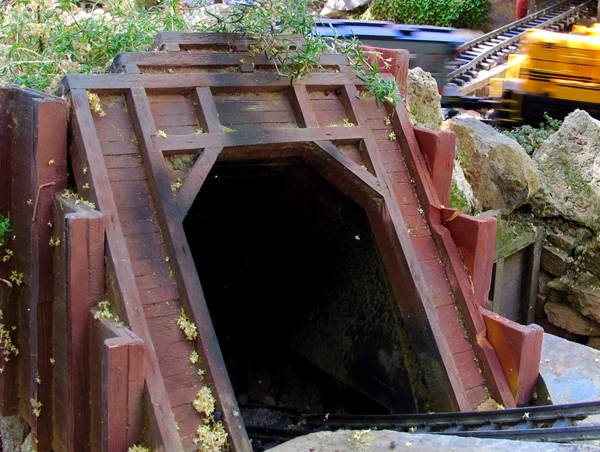 Photo 6
Like a bulkhead door to the cellar, the portal on Dennis Winger and Susan Patterson’s Folsom Eastern Railroad Company mineshaft is slanted, much like one at Empire Mine in Grass Valley, California. Low plants crown the structure.
Nancy Norris 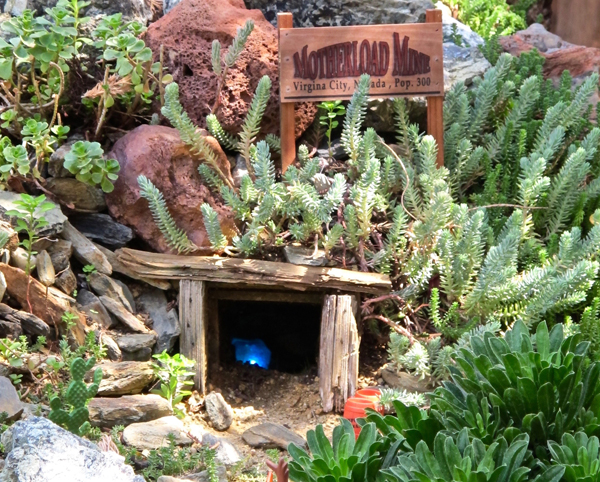 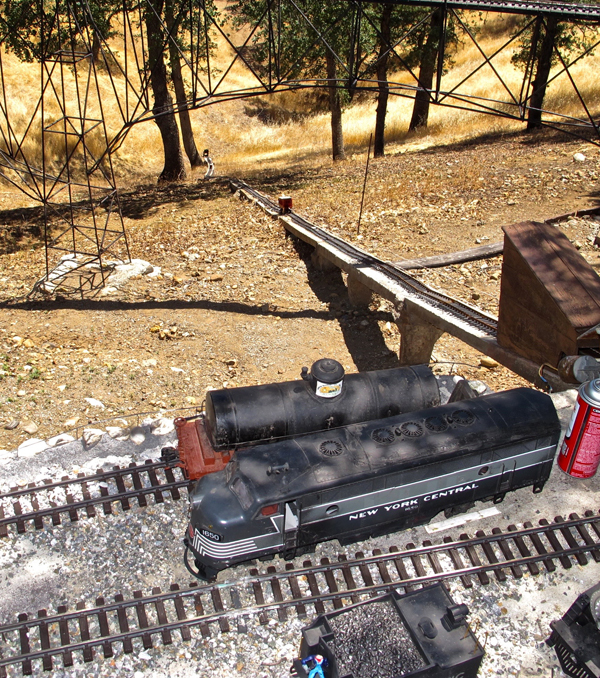 Photo 8
A 100′ funicular railroad car, pulleyed by a winch, descends far down the incline, so that it becomes a speck at the bottom. Fred Lourence models some unique railroads scenes, including this highly elevated truss bridge welded from rebar (steel reinforcing bar).
Nancy Norris 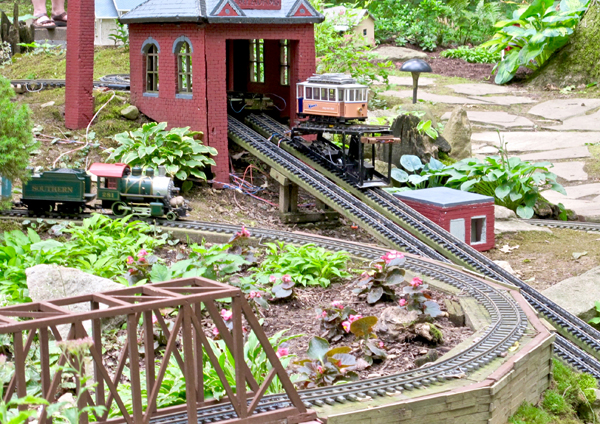 Photo 9
Jack and Kathie Griffin’s Grandymon Lake Railroad models a funicular railroad. Two trains counterbalance each other; then the train on the right travels a different route than the one on the left. Miniature hostas and begonias like the shady location.
Nancy Norris 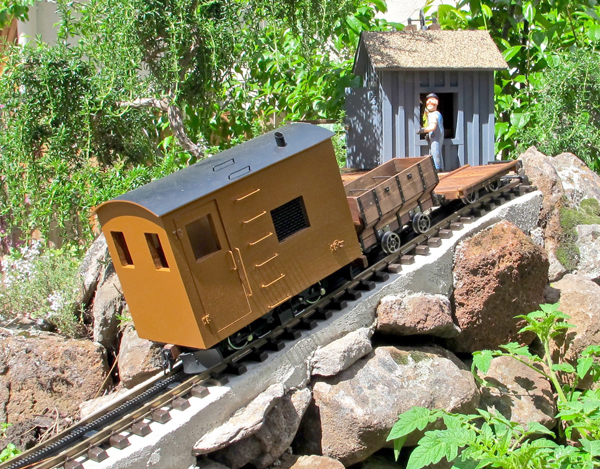 Photo 10
Miner Mick loads the ore bins manually to be hauled down the 13% grade on the author’s 1:13.7 Agriculture & Gravel Elevated. Rosemary, after much pruning, makes great trees.
Nancy Norris
To hollow out a mine or build a rock quarry is to fall in love with the versatility and artistry of stonework, a more forgiving modeling medium than plants. Thanks to gravity, we can stack natural stones to create stable structures. If the rocks will be subjected to high winds or animal or human traffic, then mortar, concrete bonding adhesive, or exterior-grade glue will hold it all in place. Here I’ll show how modelers shape hardscape into mine portals and bowl-shaped quarries. Some have stone-supported incline railroads hauling ore; most are fringed in nature’s greenery.

Second, I couldn’t believe my eyes when I found a source for 1″-thick slate, covered in fossils! Mineral deposits have “grown” into fern-like patterns that look like shadows of trees on my distant mountains (see “Plant portraits”). I leaned and overlapped many of these flagstones to quickly terrace 5′ cliffs on a one-sided mountain, where a dog-bone loop returns in my narrow yard. The stepped-bowl shape of the quarry pit hides benchwork posts and makes a handy transition from bushier ground-level landscaping up to the alpine look of miniature scenery.

Last, natural fissures, helped by a hand-guarded cold chisel, a three-pound hammer, and eye protection, create piles of scale slate ready to be loaded onto wagons. I view this scene sitting on my hand-made slate bench, with tea, and dream how I’ll stage it differently next time.

During air travel, I’ve gazed down upon huge open-pit mines. Colorful, terraced chasms span miles near the Rockies. In nearby Arizona, Gary and Peggy Martin carved out a similar deep copper mine that we could walk into (GR, April 2008). Their Eagle Mountain Railroad snakes four feet down inside the rim on terraces spiraling to the bottom.

Taltree Arboretum in Indiana quarries blocks of stone in a pit lined with larger stone (photo 2). Trains access the quarry from several levels, helped by well-rigged cranes near sidings. Junipers ring the rim.

Roger and Jeane Samuelsen model a mine’s processing plant (photo 3), wherein gold-ore cars travel between the stamp mill and the You Bet Mining Co. Adequate irrigation, spring fertilization, and annual pruning of their dwarf trees keep their scenery in great shape. Pavers (placed over 4-6″ of tamped gravel) keep the foundation level and relatively clean of debris for showing off a few workers. Contrasting gold fines (decomposed granite) compact over the road area to a depth of 3-4″, so that miners can find their way home to cheery yellow cabins. Strong wooden retaining walls (GR, Aug. 2012) keep the yard level and retain the slope above, where thyme and sweet alyssum drip over the edge.

Doug and Ricki Mayes artfully weathered a complex of mine buildings for their Colorado & Sparktown Railroad (photo 4). They chose a groundcover of red-rock dust to model their geography and match the boulders, which retain the slope. Dwarf boxwood trees (Buxus sp.) add height while Irish moss (Sagina subulata, Zones 5-10) stays super low between the track and the front windows.

Three mines show a range of treatment. Faith and Roger Clarkson, with their crew, modeled an extensive mining industry on their Fabing Railroad (photo 5), where mine portals line up for work.

In photo 6, Dennis Winger and Susan Patterson’s Folsom Eastern Railroad Company runs near California’s Mother Lode, where Empire Mine sardined dozens of gold miners into long rail cars that were pulleyed up and down into the sloped underground tube. Docents there told me that much gold remains deep in that mine, if one can efficiently pump out the groundwater.

The greening-your-mine award goes to Marc and Colleen Grzan’s most gardeny portal, surrounded by signage and succulents (photo 7). Small but effective, the mom ’n’ pop mine appears quite active, due to the lit lantern deep in the hole.

To climb grades from 8% to 71% (the world’s steepest railroad), trains start with geared locomotives, helper engines, and switchbacks until grades get too steep. Winched cables pull cars up long runs, then use the cables to brake them going down (photo 8), as in Fred Lourence’s Hilltop Southwestern Railroad.

In the style of a funicular railroad, Jack and Kathie Griffin’s Grandymon Lake Railroad runs side-by-side powered track with toothed cog strips (called “rack”) between the rails (photo 9). Prototypes use gravity and counterbalancing; one funicular car goes up while the other goes down, tied to the same cable. Would you like to tour a salt mine and ride the world’s oldest funicular railroad? It’s in Saltzberg (salt mountain). Read about and see photos of the many funicular railroads around the world at https://en.wikipedia.org/wiki/Funicular

As more of us decide to elevate our railroads to save our knees, mines and quarries could scenic the area between benchwork posts (photo 1) with easy maintenance (blower). Those with ground-level railways might quickly add a small back-and-forth mine line near the top of your mountain (photos 3, 9, and 10).

I commissioned my grandson, Lake Phillips, to build an incline railroad to access a closed-pit mineshaft. The wooden shack’s roof opens to a cabled wheel, just visible in photo 10; a cable runs from the invisible load inside to a counter-balanced, cast-concrete weight mounted behind this shack over a redwood truss-and-pulley system.

Lake scratchbuilt a 7/8″-scale box cab, then mounted it on an LGB rack-loco chassis, adding switches, smoke unit, and fan inside. LGB’s rack strips keep the train from speeding down the 13% grade and also help it climb. An automatic reversing unit calls attention to the industry atop Mt. Rosemary.

Elevation created by stone is great for contrasting deep mines. Upper lines cross a lower rail line and ultimately bring the railroad closer to eye level. To show activity, why not stage the mine to play out a new story for each of your open houses? This gardener thinks the best mines allow for green jewels to grow in the cracks.

Geologists call human-made landforms on the Earth’s surface or in shallow water “anthropogenic” because of the human-transported materials or rock. Soil-conservation terraces and mining pits originate from deposition (levees) or removal (quarries). Lately, geologists have proposed naming a new cycle, called Anthropocene—an era we model when we access these landforms with scale tractors and trains. Visit https://bit.ly/2GD8hr9

• Search GardenRailways.com and use keywords “rock structure” for more than 40 stories, some with how-to instruction.

• Search “Google Images” for “slate quarry,” “mine portal,” “mine rail,” etc. for inspirational photos. Click on image to get location and more.

• Get in the car and tour your local stone quarry, gravel pit, and mine. 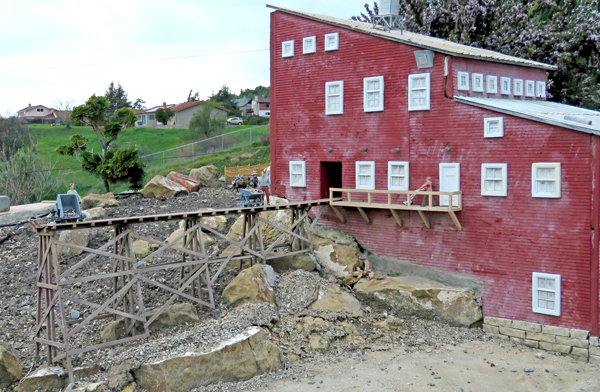 In contrast to greener areas of Ray’s railway garden, landscaping around the mine is primarily hardscape, with tailing-sized rocks at the bottom of the trestle
Ray Turner 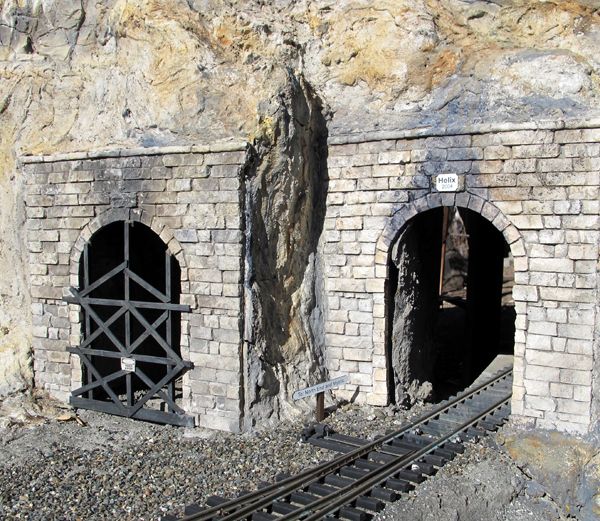 Ray responsibly boarded up the unused portal on his railway to keep out the kids. Cast-concrete walls use techniques from Stoneworks.
Ray Turner 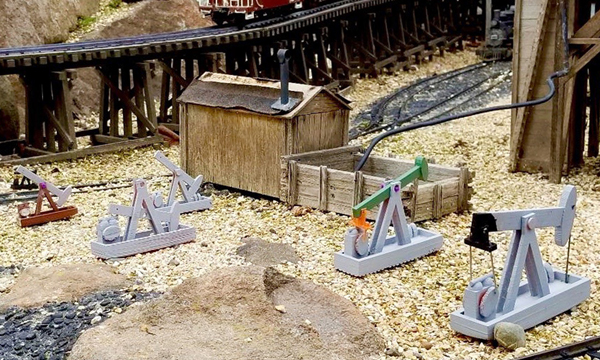 Before he got his module finished, Richard checked out the scale nature of his oil derricks at Ed Kornegay’s railroad.
Richard Friedman

How have you landscaped or accessorized your mine?

Ray Turner
San Jose, California, Zone 9
Ore
My Mystic Mountain Mining & Manufacturing is freelance and scratchbuilt, with 120 pounds of cast concrete around the mine and mill. On the side of the mine building is a trestle (painted styrene) on which workers push the tailings and dump them over the side. The ore carts are 0n30 Bachmann models. The large rocks are just what I dug out of the ground here; the smaller ones, representing tailings, are 0-scale ballast. The fine “dust” particles are granite fines used for setting flagstone. Ore is loaded into ore cars below the extension, which is made of acrylic instead of concrete, like the rest of the building.

Richard Friedman
Sacramento, California, Zone 9
Oil
I saw many oil pumps in Tulsa when I was there for last-year’s convention. However, I wasn’t able to find any in large scale so I designed some in Tinkercad and printed them in various sizes. I’ll be trying to make some rolling hills on a large-scale module and dot them with these oil jacks. The rolling hills are complicated by the fact that I’ve only got about 15-20″ from the front to the back of this module. I’m thinking of trying 1/4″ hardware cloth and plaster-gauze to keep it light and relatively flexible.