Lionel’s 2020 Vol. 1 catalog celebrated the firm’s 120th anniversary, and what a catalog it was. For me, the most distinctive offering wasn’t a single locomotive, but a single style of locomotive: The Southern Pacific’s venerable GS (General Service or Golden State) line of 4-8-4 Northern steam engines.

If you’re an SP fan, then as my grandmother used to say, your ship has come in!

Production numbers of these O gauge beauties are limited, and they have all the latest technology Lionel offers. In addition, the starting price is, shall we say, robust. Nevertheless, the bold scope of this project may be a new standard for Lionel!

Background of the models
Our test subject was an SP design, but in Western Pacific livery. So how did the WP get these engines?

It’s probable that without the onset of World War II, the WP would never have acquired this specific type of locomotive. Wartime production limitations narrowed the choices railroads had in buying new motive power.

In 1943, the SP sought to build 14 streamlined 4-8-4s for Daylight passenger service. The War Production Board nixed the streamlining as superfluous to wartime transportation. SP reworked the design.

Enter the Western Pacific. It was a 1,500-mile carrier running from Salt Lake City to Northern California and San Francisco. Passenger operations were fairly limited; the WP hosted the western leg of the Chicago-Oakland California Zephyr passenger train as well as tri-weekly service from Oakland to Salt Lake City.
The railroad was in a crunch for more power, steam or diesel. It was, after all, a main artery to the Pacific Coast for travelers and, more important, the armed forces fighting in the Pacific Theater.

The WPB agreed the line needed new power, so it reassigned six GS-6s from the SP’s order to the Western Pacific. Dubbed GS-64-77s, they were broadly similar to their SP cousins and were used in freight and passenger service. As postwar dieselization grew on the WP, three of the GS-64s were sold to the Southern Pacific as parts sources. 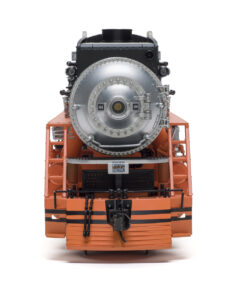 Opening the box
Let me remind everyone that this is a $2,000 Vision Line product. It promises all the bells, whistles, and technology associated with that impressive series.

I had high expectations, and yet when the wrapping material was off I was still amazed. This may be the most beautifully crafted locomotive I’ve ever seen. After reviewing several hundred products over the past 25 years, that says something.

The uncoupler arm, air brake lines, and scale-sized coupler on point are very visible. Just above the pilot is a black-painted deck for maintainers to access the smokebox, headlight, and number boards.

Being unaware of the variety of SP locomotive classes on which this model is based, I expected the over-and-under headlights. Nope, there’s a single headlight in the middle of the smokebox.

The front of the smokebox has superb deep-rivet detail. Just above and to the sides are the classification lights. Using a Legacy controller, you can select them to be off, white (an extra unscheduled train), or green (additional sections to follow).

On the upper fireman’s side, just above the classification light, you may spot something curious. No, it isn’t a blunderbuss or a bugle, but an air horn. Yes, these locomotives had air horns as well as a traditional steam whistle.

The top of the locomotive has the familiar streamlined “skyline” casing that minimizes resistance and facilitates airflow over the top of the engine. The shroud incorporates the smokestack. The casing is fluted to drive the smoke upward – and it’s needed, since this model has a tremendous smoke unit!

About halfway down the hood you’ll spot number boards on the side angled outward. These are illuminated, showing X486 (Extra 486). Two pop-off valves, a turbogenerator, and the steam whistle are located up top. These are in recesses a bit closer to the cab.

The sides of the boiler have grab irons, piping, and a reverse lever. You’ll also spy a diamond-shaped Lima builder’s plate and a trust plate on the smokebox side.

Below the running board are piping and running gear, all done and in a delightful silver tone – terrific for enhancing the details, in particular piping rivet detail on the smokebox.

The locomotive, being an oil burner, negates the need for the fireman to shovel coal from the tender. This, combined with some of the worst weather in all of mountain railroading, called for an enclosed all-weather cab. There are steps leading up to the cast-in cab door, and add-on grab irons on both sides. The interior is green, and crew figures have been installed. The cab is illuminated, and up top is a ventilation hatch you can open to peek inside. 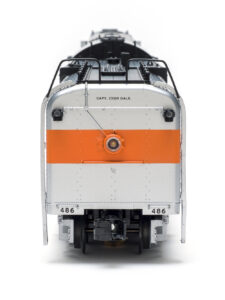 The tender is a metal monster! It boasts six axles and intricately shaped truck sideframes. Silver paint highlights detailing that would have been lost if done in black.

Grab irons are on both sides of the water tank, and there are handrails on the rear. These are placed at ladders that curve up and over the round end of the tank.

The tender rear has two class lights, a backup light, and a remote coupler. Painting was outstanding. As mentioned, the silver makes details really stand out. The orange striping is flawless and almost looks to be part of the casting rather than an added coloration.

On the test track
Just powering up the model is a show in itself. The sounds at startup are terrific, but the model doesn’t need to move a wheel to provide a show. The smoke unit is powerful. You can adjust the output, which is a handy feature, so it isn’t a case of full power or off.

There are some fun “steam” features as well. Trigger the whistle, and you’ll get a stream of smoke emanating from the whistle area. You can also see “steam” cycle out of the steam chests through the reciprocating cylinder feature. This is a lot cooler than I thought it would be!

It looks amazing when the 4-8-4 is running at slow speed. Who hasn’t seen a movie where people trackside vanish in a cloud of steam as a big locomotive rolls by?

As with most contemporary models, you have crew talk, the dialog for which is railroad specific and chimes in throughout a run. The “at rest” sounds are good, and once the locomotive gets moving, the DynaChuff makes itself known through several levels of effort.

The whistle has a quilling feature to enable you to perfect your own custom toot as you approach each grade crossing.

An interesting feature can be accessed if you’re using the app: voice control.

I tried it out and got mixed results. There’s a list of commands to start, stop, and activate certain functions like the whistle. It does work, but I had to repeat about half of the commands more than once. Several times I repeated the commands, but my phone replied, “Unable to identify command.” I thought that might have been the phone (Siri) replying, although it’s turned off on my iPhone. I look forward for further development of this feature.

The model’s performance was exemplary. I put a mishmash of O gauge passenger cars in tow, and all those hot vintage light bulbs didn’t intimidate the locomotive at all. Neither did the freight consist I hooked up.
Drawbar pull was among the best I’ve seen at 3.9 pounds. The speed range was excellent as well. In command mode the high speed was 71.9 scale mph; the low speed was 2.1 smph. The conventional low speed (using an MTH no. Z-4000 transformer) was 6.1 smph.

I was surprised that a locomotive of this size would run on curves as tight as O-54 – I’d have guessed O-72 at a minimum [It actually made it around the O-31 curves on our layout! I wouldn’t recommend doing this, however; the tender trucks weren’t happy with the tight curves.– Ed.].

One detail that may be easy to overlook is the Kinematic drawbar. This is a Lionel design that gives the coupler shaft a wider range of movement, permitting easier movement of a connected car through a tighter curve. This is pretty neat.

Some years back I wrote that Lionel’s Union Pacific FEF 4-8-4 was the best locomotive the firm had ever built. This series of SP-inspired models certainly makes a strong case for that title, and one could be the centerpiece of your fleet.

I sure hope Lionel doesn’t decide to give this same star treatment to, say, the various sub-classes of New York Central Mohawks. My bank account couldn’t possibly afford it!

More photos available at Trains.com/ctt. Thanks to Sommerfeld’s Trains & Hobbies in Butler, Wis., for loaning us this model.