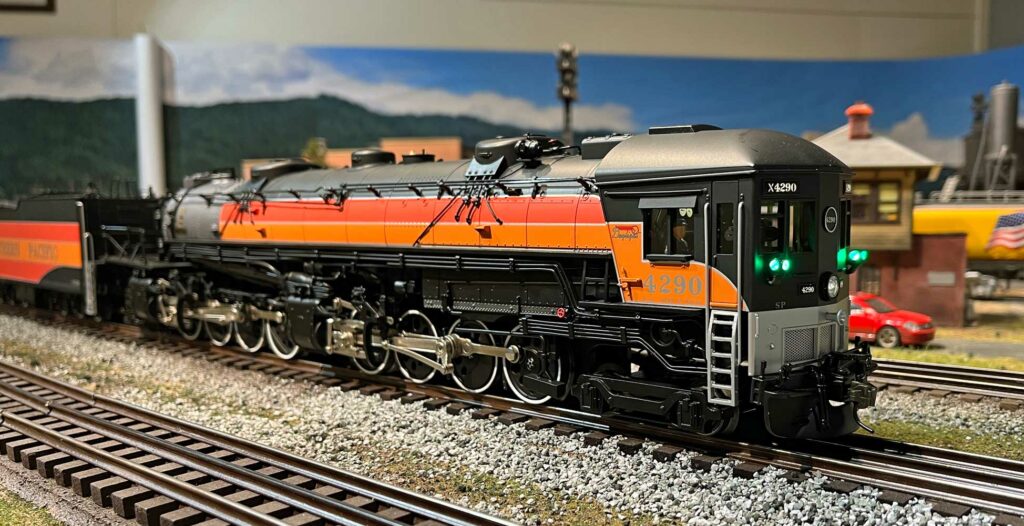 The wait for the Lionel Legacy AC-12 Cab Forward has taken a little longer than the company’s normal 4-6 year re-release cycle. The TMCC version of the AC-12 was released in 2005 followed by a repop with whistle steam and Legacy control in 2014. In 2022 we’re receiving the latest version, first announced in the Lionel 2021 Volume 2 catalog.

The latest release of this uniquely Southern Pacific locomotive hasn’t been quite as publicized as other recent models. This could be for a number of reasons, including that fact that it’s not a new model or tooling. However, my theory is it’s because is the 2021 releases from Lionel were vast and diverse.

The cab forwards were the third engine cataloged in the Volume 2 publication after the brass hybrid 2-10-0 Strasburg No. 90, which took got a lot of people’s attention. That was followed by the 2-8-0 Consolidations which were priced and sized for many collectors.

Following the cab-ahead models were the re-release Union Pacific 4-12-2s.

Lionel did offer six variations of the cab forward this time around: two black-boiler versions (road numbers 4281 and 4290); a black-boiler model without lettering on the tender (4278); one in Daylight paint (4290); a Lark scheme (4285), appropriate for those with cars from that passenger train from the time of the Vision Line GS 4-8-4 release; and a red cab, gray boiler livery (4276).

The delivered model is beautifully finished. The paint is crisp and matches the 21-inch passenger cars from the Visionline GS-4 release.

Looking back at the prototype, Southern Pacific’s AC-12 Class locomotive was built by Baldwin Locomotive Works. The builder constructed 20 of these between October 1943 and March 1944.

No. 4294 is the only one of this type to be saved and is on exhibit at the California State Railroad Museum in Sacramento. It was also the last steam engine built for SP.

There’s a reason these 2-8-8-4s were designed “backwards” with the cab in front. It was intended to keep the crew safely out of the smoke from the locomotive as the engine traveled through long mountain tunnels. Due to the cab being in the front of the locomotive it features partial streamlining, an air horn, and a windshield.

While they were used across the Southern Pacific system, they were most effective along the Donner Pass and Cascade Summit routes in the Sierra Nevada. The engine produced just over 123,000 lbs. of tractive effort, just what the SP needed to climb the grades of its territory.

The AC-12 and its predecessor cab-aheads feature a large flat area between the smokebox and  tender called the “monkey deck.” While it might look like a great place to watch the action, it wasn’t safe for the crew to be there. The engines had a tendency to spew boiling water from their stacks which could burn any loiterers on the deck below.

The last revenue service for the cab forwards was in 1956. In 1981 locomotive No. 4294 was designated a National Historic Mechanical Engineering Landmark.

The latest release from Lionel features whistle steam, stack steam, rear ElectroCoupler, Legacy and Bluetooth control, bi-color marker lights, and Lionel Voice Control. Lionel has added multiple whistle sounds and bell pitches to this engine. They can be changed using the Aux 1 key on the Cab2 remote, or with the LionChief App.

The engine also features multiple horn tones since the prototype had an air horn as well as a whistle. You will definitely hear it coming.