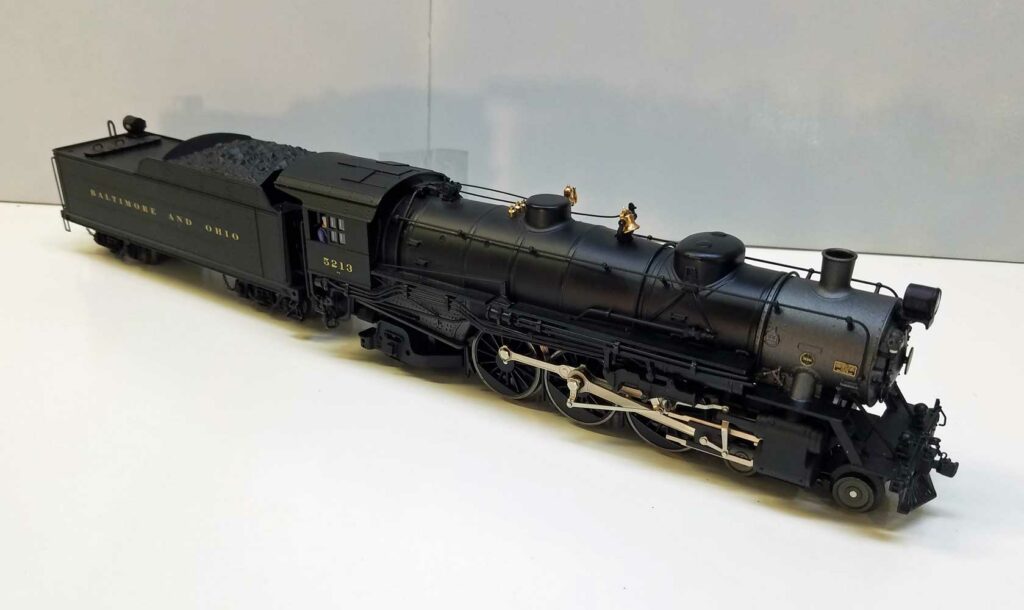 The 2021 Lionel American Flyer catalog announced the production of a Legacy-equipped light 4-6-2 Pacific locomotive. It was exciting to hear the tooling for it was going to be used again; the company produced a number of models of these United States Railroad Administration-designed engines from 2006 to 2008 as well as a light 2-8-2 Mikado from 2004 to 2010. All used the same body and tender tooling with different chassis for the wheel arrangements.

Find information about the earlier Pacifics in the American Flyer Pocket Price Guide.

The early 2000s Pacifics were the first S gauge engines with Train Master Command Control. For American Flyer collectors and operators, this meant at last they were going to come into the new hand-held control technology of toy trains.

For more than 10 years I reviewed locomotives for S Gaugian so I was familiar with the tooling.  Through the years I asked my Lionel contacts if the company was ever going to reuse it and was informed it had been lost.

When the new Legacy Pacifics were announced I called my Lionel contact and learned the molds had been found.

The 2021 Flyer catalog celebrated the 75th anniversary of A.C. Gilbert and American Flyer. To mark the occasion Lionel announced a set to be pulled by a Pacific. In addition, the locomotive would be produced in multiple roadnames: Baltimore & Ohio, Great Northern, Santa Fe, New York Central, Rio Grande, and U.S.R.A.

An additional set with a Reading & Northern Pacific was displayed but cancelled.

In the box is the locomotive and tender, along with two extra traction tires, a special wrench for the bolts connecting the siderods to the main drivers, a dropper for smoke fluid, and the operation manual. I checked the booklet to see if there was anything new from earlier Legacy engine manuals. Seeing nothing I lubricated the engine as specified. It’s been my experience engines can come from the factory without it.

First, I ran the new engine with conventional power. It ran well with quick responses and there were no issues. I have to two Lionel sound buttons wired into my layout and use Flyer 30B transformers. The Railsounds were perfect and the buttons activated the whistle and bell.  To get crew talk you have to give a short blast of the whistle. It worked as it should.

Next, I programmed the 4-6-2 to my Legacy unit and again ran it through a series of tests. It did everything as prescribed. I especially appreciated the smoke unit; it was very productive even after I set it to the “low” level.

I don’t have DCC on my layout so I couldn’t test this mode of operation. The manual has good instructions on using DCC with the Pacific.

My layout uses original American Flyer track and switches, which means that there are tight curves and Gilbert switch issues that can occur when testing.  The Pacific had no trouble with the curves and went back and forth through the switches without difficulty.  I tested pulling ability by placing Gilbert-era Flyer freight cars behind the engine until it wouldn’t start; the Pacific was able to move 20 cars before the drivers slipped.

At this length the engine had to pull the consist through two curves, so with the traction tires and motor it has good power.

The appearance of the engine is excellent overall. It’s painted satin black with white numbers and lettering, and has lots of separately applied handrails and piping. The whistle and bell are brass and the latter has a cord running to the cab. If there was anything I didn’t like, it was the separately applied coal in the tender was a little shiny for my taste.

The engineer and fireman are visible and the cab has lighting when at rest.  There’s also the red firebox glow that’s very prominent during night operation. The length of the locomotive is 15.5 inches so it’s shorter than a Gilbert K5 Pacific.

I have a number of the Lionel TMCC Pacifics so I spent some time comparing them with the new model. The most important change was eliminating the troublesome Seuthe smoke unit in favor of one with a fan that puffs. Another improvement is that the Legacy engine is very responsive to directions from the hand-held device, whereas the TMCC engine is slow to react.

I examined the engine and tender closely; there were no changes to my eye. There were fewer applied extras under the tender like the small chains that connect the chassis to the trucks, but those were always troublesome at best and frequently broke.

I think this example of the 1920s U.S.R.A. light Pacific is a great addition to the Flyer line. With a list price of $699.99 it’s a good value, especially when compared to what Lionel charges for its similar O gauge locomotives. I can only wonder if the light Mikado will be the next steam engine for Flyer since it can use the same tooling. We shall see.