What's the value of a much-loved Lionel train outfit? 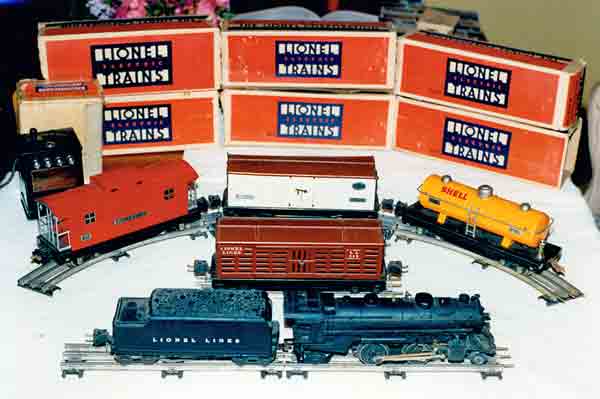 It was an April evening when I returned home to find this message on my answering machine: “I have a train set that was purchased in 1941. Can you tell me what it’s worth?”

I recognized the voice as belonging to an acquaintance that knew I collected Lionel trains. “Nice of the guy to call,” I thought, but I didn’t feel too hopeful. After all, I’d been asked that questions maybe a million times. And you can guess just how many times it has led to nothing.

Not this time, however. That otherwise ordinary telephone call led to what is my greatest find in many years of collecting toy trains.

I returned the phone call the next evening. After thanking the man for calling, I listened as he told me the story of the set. He and his wife were getting ready to retire to Florida. They had purchased the O gauge train in Pennsylvania for a son who didn’t actually arrive until 1948.

No matter! The man and his wife had always enjoyed the train, running it around their Christmas tree for many years. Now, though, they wanted to sell their much-loved set so they would have less to move south.

They described what they had: a steam locomotive and tender, three freight cars, a caboose, track, and a transformer. Nothing unusual so far.

I was impressed when I learned that they had saved the individual boxes for all these years. Being the experienced collector that I am, just before hanging up, I asked about the number and color of each piece.

As the couple listed what they had, I began to feel that there might be something special about their Lionel train set. But what was it? I made arrangements to visit their home later that week and photograph the train.

Something special about this set

I could hardly wait until Friday, when I planned to drive to their home and take pictures of the train set. After talking with the owners and consulting reference guides on prewar Lionel O gauge trains, I felt certain they had at least one scarce piece, a no. 813 stockcar in brown. Just seeing this hard-to-find car would be a treat.

Friday evening finally arrived, and I drove over to look at the set. I carefully took each piece out of its box to arrange them for photographing.

To start, I found a no. 229 2-4-2 steam locomotive, which could not be considered rare. Neither could the no. 815 Shell tank car or the no. 817 caboose that they had. I opened the box with the 813 stockcar, which was in like-new condition. As the woman had said, it was painted brown. I took my time, eager to admire this piece, which is among the most difficult to find of all prewar Lionel O gauge freight cars.

Next, I pulled a no. 814R refrigerator car from its box. The white-painted car had a black base and a brown roof. Suddenly, it hit me that something wasn’t right with this car. According to the reference books that I had read, the last version of the 814R, dating from 1940, had rubber-stamped black lettering. However, the model I was holding came with nickel-silver plates. I had discovered another scarce variation!

A close inspection of the stockcar and the refrigerator car convinced me that they were original Lionel factory-produced items. Nothing indicated that they had been tampered with: no chipped paint on the metal tabs and no scratches on the bases. My questions multiplied.

The tender only added to my confusion at what I was examining. At first glance, this model seemed quite ordinary – just a typical no. 2666, which was the first black plastic type, manufactured in 1941. The box had “2666T” printed on the sides and ends. However, that number had been overprinted with a black line, and another number, “1666TS,” had been printed above each line. Further studying the tender, I noticed that “1666TS” had been rubber-stamped in silver on its base. I was puzzled because no such number appears in any of my reference books on prewar or postwar Lionel trains.

Still searching for clues, I turned to the transformer, still in its original box. That package had Lionel on the label, but again the number couldn’t be found in any book. Then I took out the transformer and picked it up. It was a stud type and came with a no. 88 control button to enable an operator to manipulate the reversing unit on the steam locomotive. I felt baffled about its origins until I read the etched plate under the terminals: “Sears transformer 75 watts type SR 115 Volts 60 Cycle AC made in the U.S. of America The Lionel Corporation New York.”

“Did you buy this Lionel outfit at Sears?” I asked the owner. Neither he nor his wife could recall with certainty where they got it. They did remember when, however: December 14, 1941, a week after America had been attacked and entered World War II. The set box, which might have helped answer my questions, had disappeared long ago.

For sure, this was no run-of-the-mill train set I was photographing. The contents did not correspond to anything described in Lionel’s catalogs in the late 1930s or early ’40s. What this couple had purchased was a special, or “promotional” (uncataloged) outfit made especially for Sears.

“What do think our set is worth on today’s collector market?” the owner asked. I gave my best estimate as to its value, which I thought would be a fair asking price. The man agreed and said that the amount sounded more than fair to him and his wife.

Unfortunately for me, that price was out of my range. All I could do was get word out to fellow collectors to see if they had any interest.

What an understatement! Within a week’s time, the offers were flowing in, each better than the last, until finally the highest price arrived. Buyer and seller agreed on that offer, and the scarce Lionel set was sold.

As for me, I have no regrets in not being able to purchase the Lionel set. After all, I was able to help out an acquaintance. In addition, I had the pleasure of seeing first-hand what is definitely a rare find.

More importantly, I had the absolute enjoyment of tracking down information about this set. And isn’t the thrill of the hunt really what the hobby of toy train collecting is all about? Even if we can’t buy something, we can have fun learning about it and adding to the store of information.

In 1,000 words or less, please tell us all about your greatest find, including what it is, when and where you got it, and why it qualifies as your top find. Send all submissions, including photos of your prized locomotive, set, catalog, and so forth, to “My Greatest Find,” Classic Toy Trains, 21027 Crossroads Cir., Waukesha, WI 53187-1612. Electronic submissions (along with digital photos) go to rcarp@classictoytrains.com