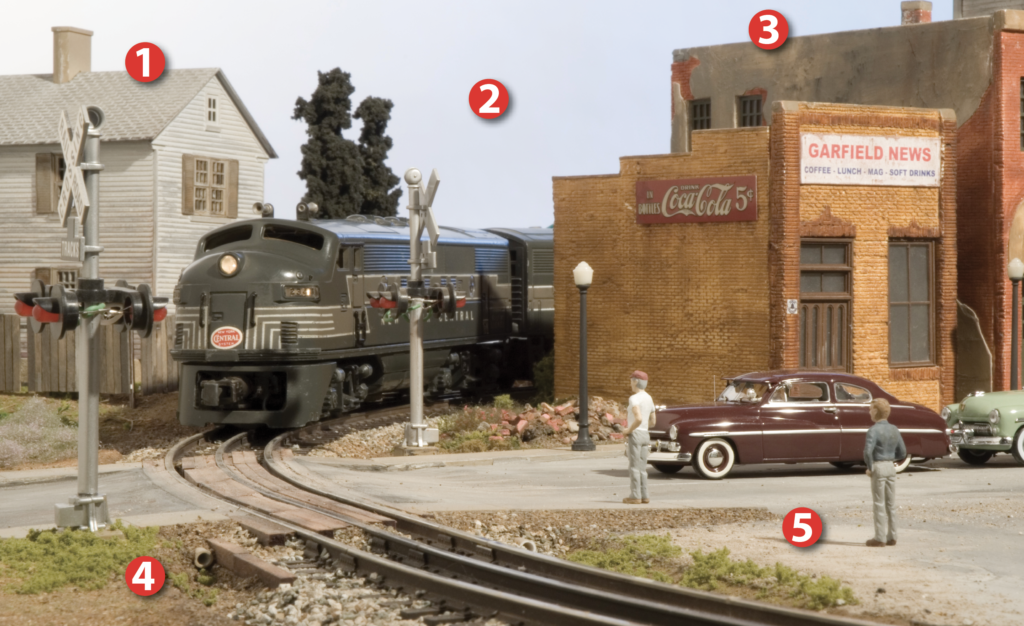 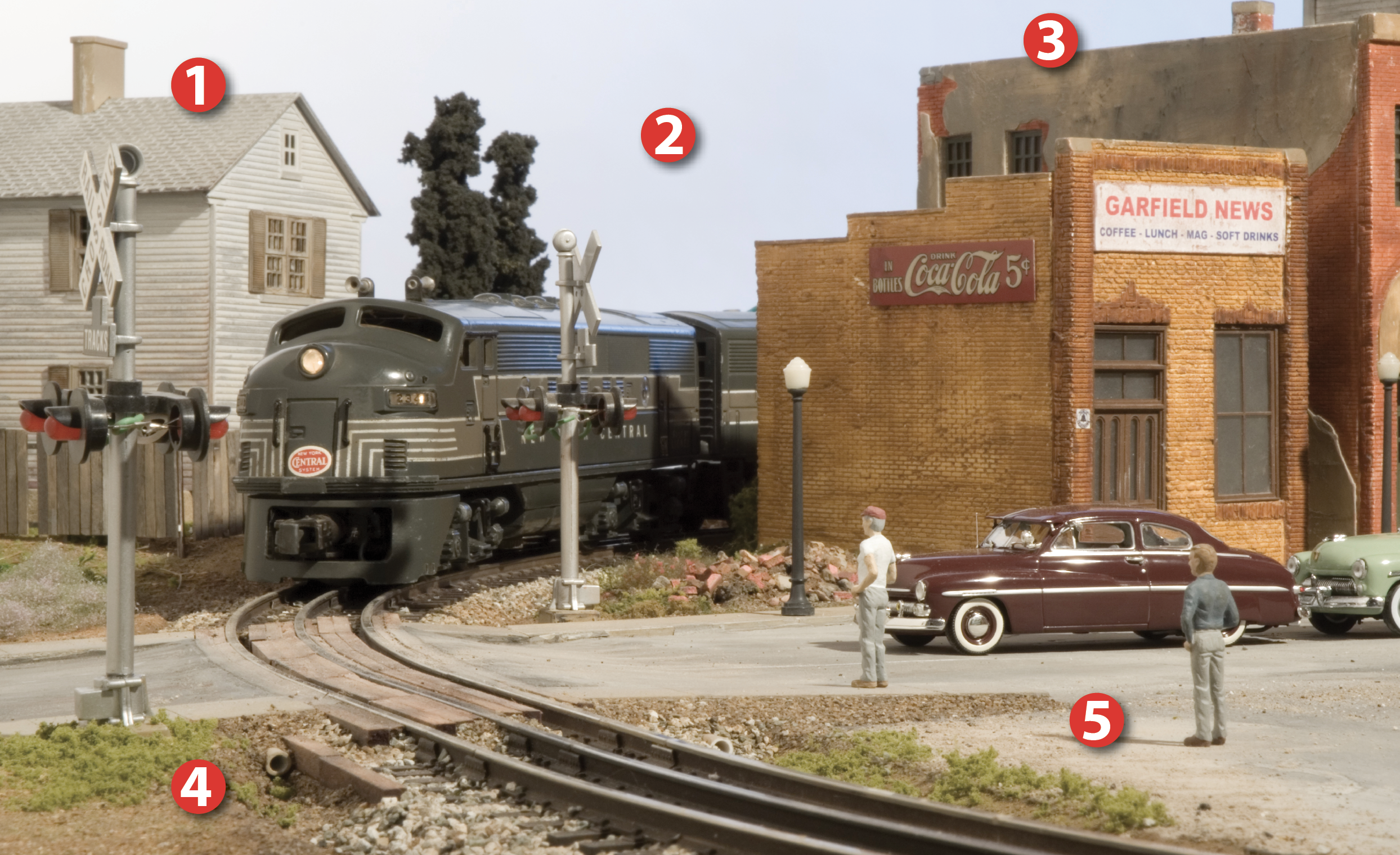 A Transition Era toy train grade crossing includes details showing place such as the New York Central cab unit approaching a crossing and stopped traffic. Five numerals in red circles 1 through 5 highlight portions of the scene discussed in the text.
Dennis Brennan
A version of this article first appeared in the January 2011 issue of Classic Toy Trains.

Whenever someone asks me what makes a toy train layout special, I reply that detail is the key. Size and scope don’t matter as much as what a modeler does in the space available. Developing memorable scenes – “vignettes,” as they’re called – can be done anywhere. You need strong vision and a powerful imagination.

The most successful vignettes combine structures, figures, and details – plus a train or two – to create a slice of life in miniature. You gaze at the finest scenes on a layout and feel as though you are there, walking around the modeled rail yard, standing at the station, working in the factory, or plowing on the farm.

One of the best practitioners of the “art of the vignette” is longtime Classic Toy Trains contributor Dennis Brennan. He shared many of his techniques and ideas in the series of four articles he wrote about building his O gauge Sandy Harbor Terminal (December 2007 through March 2008 issues). Then he expanded those stories into a book: Realistic Modeling for Toy Trains (item no. 108390, available for $19.95 at www.KalmbachBooks.com).

For ideas about developing an evocative vignette, study the three photos from Dennis’ layout at the top of this page. Don’t you feel as though you’re in that industrial setting in the left-hand photo? Or standing trackside as the diesel switcher creeps over the Lionel bascule bridge in the upper right-hand shot? Details make the difference. You can almost hear the wind blow and smell the smoke from the 0-6-0 steamer in the lower right-hand photo.
Superb modeling! But, Dennis adds, anyone who pays attention to the world, investigates the products on the toy train market, keeps building structures and scenery, and lets his or her imagination soar can create cool vignettes.

1.) ABANDONED HOUSE
A lack of details on the house that dominates the left side of this photo of Dennis’ layout reinforces the impression that no one lives there anymore. Note how Dennis raised this two-story structure (a Plasticville kit offered as Atlas O item no. 2009002) and positioned it at an angle from the street so it bordered the curved track. He weathered the clapboard siding and left a gap in the wood fence (available from Brennan’s Model Railroading) to catch a viewer’s gaze. A final touch was the addition of shutters. They make you want to peer inside the window and learn why folks moved out.

2.) KEY DETAILS CREATE A MOOD
Dennis depended on his imagination rather than his knowledge of an actual site or a vintage photograph to develop this vignette for his O gauge layout. Viewers feel as though they, like the two men standing on Garfield Avenue, have stopped what they’re doing to watch as New York Central F3 diesels from Lionel guide a train across a quiet grade crossing. The abandoned house, drab brick businesses, worn pavement, and scattered debris enhance the realism of Dennis’ modeling while creating a somber mood uplifted only by the sight of the gleaming locomotives.

3.) THE RIGHT STRUCTURES
Downtown Deco made the structures Dennis placed along Garfield Avenue after weathering them lightly. He added the Coca-Cola sign (found at a crafts store) and made the Garfield News sign on his computer. Naming the building helps define its purpose so you can imagine looking in to observe newspapers, magazines, and comic books, plus a counter where coffee, soda pop, sandwiches, candy, and pastries are sold. The adjacent pile of rubble (item no. CD0410 from Custom Dioramics) fills in the otherwise empty area and reminds us this neighborhood isn’t flourishing. We return to that vacant lot in hopes of spying some-thing we’ve missed.

4.) GROUND COVER AND RIGHT-OF-WAY
There are enough details to enthrall viewers without overwhelming them with the minutiae of daily life. The ground cover represents a mix of products from Brennan’s Model Railroading and Woodland Scenics; the culverts and wood ties are common materials. Painting the rails and laying down ballast are simple tasks that any modeler should do. Here, they transform the three-rail track so it augments, rather than detracts from, the sense of realism.

5.) ROADWAY AND FIGURES
The weathered, uneven roadway serves as a perfect stage for the shiny 1:43 scale models of 1950 automobiles (Mini-champs and Universal Hobbies) because it contrasts so vividly with them. The Arttista figures seem to have been interrupted in conversation by the train and have now turned to admire the F3s. Each man is deep in thought, perhaps wondering where the train is bound or what it is carrying. You feel as though you’re right with them on this Friday morning.