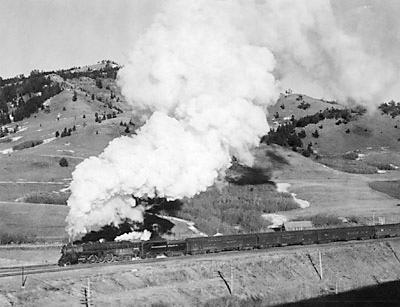 McGee’s favorite subject is the Northern Pacific, the railroad that also employed him for 35 years as a brakeman and conductor, based in the NP shop town of Livingston, Mont.

McGee was drafted in the Army during World War II, assigned to photo reconnaissance. Back in Montana, he resumed his railroad career, but also landed free-lance photography assignments for Northern Pacific and Great Northern, creating photos used in advertising. NP even paid for a camera McGee could use while taking other company photographs.

“I like a train, a steam engine that is well painted and well maintained. It’s a picture of power to me,” McGee tells Classic Trains magazine in its Fall 2003 issue.

When not working, McGee scoured the mountains, canyons, and river bottoms of Montana, capturing images of the Northern Pacific, Great Northern, and Milwaukee Road during the mid-twentieth century.

McGee has donated his vast collection of photographs to the Montana Historical Society.