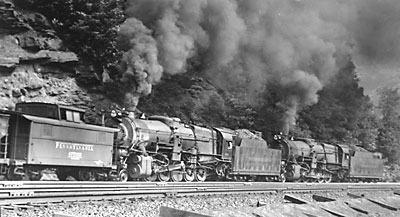 Two Pennsylvania Railroad Decapods shove a heavy freight around Horseshoe Curve in the Allegheny Mountains.
H. W. Pontin, Railroad Photographic Club
The first 2-10-0s were built for the Lehigh Valley in 1867. They were not, however, a success. Their long rigid wheelbase was too much for the track, and the two locomotives were later rebuilt into eight-coupled engines.

Nothing more happened for 24 years until the Erie Railroad took delivery of six compound camelback 2-10-0s between 1891 and 1893. Unlike the Lehigh Valley engines, Erie’s performed very well in pusher service on Gulf Summit in south central New York state.

At about this time, the 2-10-0 acquired the name Decapod – presumably because of its ten driving wheels. Nonetheless, the Decapod did not become a popular engine design, and only a handful of locomotives were built for just three or four railroads over the ensuing 23 years.

It was the Pennsylvania Railroad that put the 2-10-0 on the map, with its acquisition of 598 Class I-1 Decapods. Affectionately known as “hippos,” these big engines called the Allegheny Mountains of western Pennsylvania home. Their mission was to move heavy coal and ore drags supplying the raw materials for Pennsylvania’s smokestack industries.

Following the Pennsy’s lead, the Lehigh & New England and Western Maryland took delivery of some massive 2-10-0s in the late 1920s. WM’s I-2 Decapods from Baldwin were the world’s largest, weighing 419,280 lbs. and capable of producing 96,300 lbs. of tractive force.

Best suited for heavy freight service, the Decapod’s chief attribute was that five of its six axles were powered, which gave it a substantial tractive force at low speeds.

However, the Decapod suffered from serious design deficiencies. First, it lacked adequate boiler capacity. Its shallow firebox, located above the rear driving wheels, had insufficient furnace volume to permit good combustion at high firing rates. As a result, the Decapod’s horsepower became limited at other than moderate speeds.

Large ten-coupled engines also generated tremendous piston thrusts, which created the need for heavy pistons and main rods. But the Decapod’s drivers were too small to hold enough counterweight to effectively balance these reciprocating masses. The resulting imbalance problem meant railroads had to limit engine speed to avoid tearing up the track and damaging the locomotive.

In Europe, unlike America, the 2-10-0 was a favorite locomotive, especially in Russia and Germany. More than 10,000 European 2-10-0s were placed in service. The engines were lightweights compared to the American designs, but they were just the ticket for Europe’s track and smaller trains. During World War II alone, Germany built more than 7,000 2-10-0s.

Russia purchased 857 2-10-0s from the United States during World War I. The Russian Revolution stranded 200 additional Decapods in the U.S., after wartime export restrictions caused the order to be canceled in 1917. The engines were modified for American use and the USRA parceled them out to about a half dozen railroads. They were given the moniker “Russian Decapod.” Eventually, they all migrated to branch lines or short lines, where their light footprint and high adhesion could be put to full advantage.

Noting their success, Baldwin produced its own lightweight 2-10-0s after World War I, offering two designs that weighed 250,000 and 212,000 lbs. These engines did not suffer from the same operating problems as their heavier cousins, and several were active on short lines right to the very end of steam.