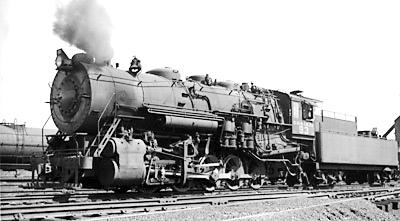 One of Duluth, Missabe & Northern’s mammoth 352,000-pound 0-10-0 switchers works the yard at Proctor, Minn., on September 15, 1951.
J. C. Seacrest collection
The first 0-10-0 was built in 1905 at Alco’s Brooks Locomotive Works as a hump engine for the New York Central. Over the next five years, New York Central took delivery of five more engines, plus an additional fifteen built for subsidiaries Lake Shore & Michigan Southern, Michigan Central, Chicago & Indiana Southern, and the Big Four. (Two of Michigan Central’s three locomotives came from Montreal Locomotive Works; all of New York Central’s other 0-10-0s were built by Brooks.)

Originally non-superheated, they had a tractive effort of just over 55,000 lbs., making them heavy switchers for the day. They were later updated with superheaters and survived into the late 1940s.

From a technical standpoint, the 0-10-0 wasn’t an attractive locomotive. It was not very nimble on curved track. It was slow, cumbersome, and it had all the counterbalance problems of other ten-coupled power. With the early 20th-century resurgence of 0-8-0 switchers – which had enough tractive effort for most yard work – and the use of Mallets for truly big switching jobs, the 0-10-0 became an engine without a mission.

Only a handful of other railroads owned 0-10-0s. Illinois Central inherited two Baldwin 0-10-0s after its 1926 acquisition of the Alabama & Vicksburg. IC then converted five A&V 2-10-2s into additional 0-10-0s assigned to Chicago’s Markham Yard. Canadian Pacific owned three, built in 1914 at its Angus Shops.

Chesapeake & Ohio took delivery of ten from Alco’s Richmond (Va.) plant in 1919, then another five in 1923. Two of them lasted almost to the end of C&O steam in 1956, shifting cuts of coal hoppers in West Virginia. The Baltimore & Ohio homebuilt two very handsome engines using surplus frames from 2-10-2s in 1926 and 1927.

Altogether, probably no more than fifty 0-10-0s were built for use in North America.

Perhaps the most intriguing ten-coupled switcher was the 0-10-2. The Union Railroad purchased nine of the type, equipped with tender boosters, from 1936 to 1939 for heavy transfer work hauling coal and ore drags in and around Pittsburgh, Pa. In 1949 they were sold to sister U.S. Steel railroad DM&IR, where they replaced Mallets handling empty drags on Proctor Hill from the ore docks in Duluth. The locomotives lasted until the end of DM&IR steam in 1962.