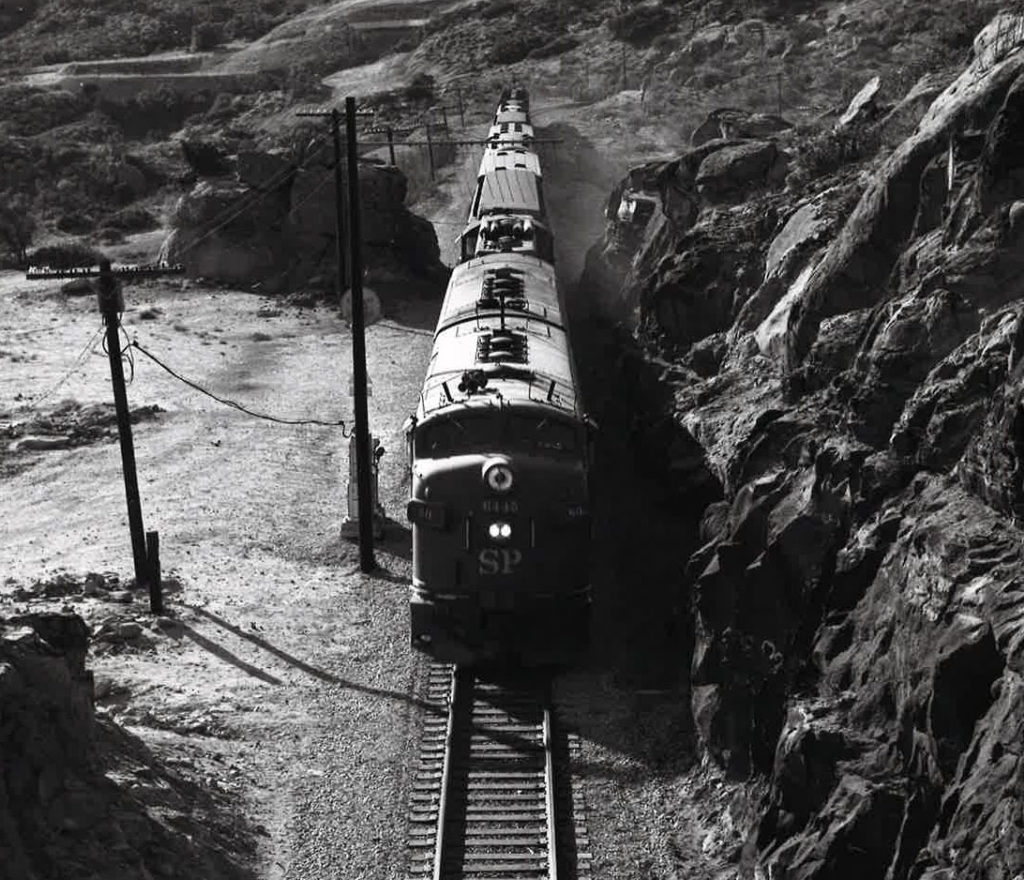 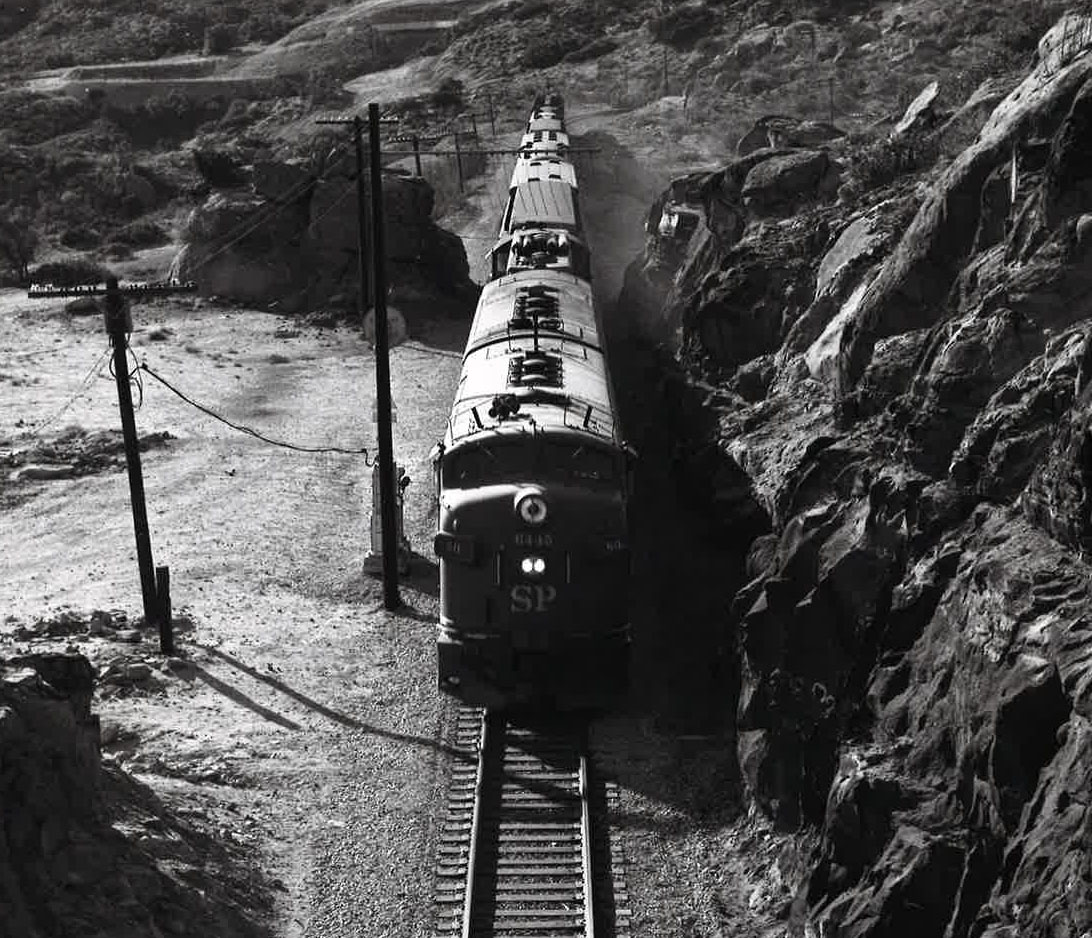 SP Coast Division train 90, the San Francisco–Los Angeles mail train known as “Sad Sam,” passes through the Chatsworth rocks northwest of L.A. in the early 1960s.
Bruce Hollinshead
I was a teenager when I first began biking the two miles from my home to a place called Gemco after school. Like many spots on a railroad, Gemco couldn’t be found on a street map. Rather, it was the name of a small yard servicing a General Motors auto assembly plant in Van Nuys, Calif., about 18 miles up Southern Pacific’s Coast Line from downtown Los Angeles.

If I could finish my chores after school fast enough — and convince my mother I didn’t have too much homework — I would zoom down Hazeltine Avenue on my wide-tired Schwinn, find a good position near the tracks and wait for my friend Sad Sam.

I always looked forward to seeing Sam. Officially he was No. 90, the daily mail train that raced from the San Francisco Bay area to Los Angeles, hitting Gemco in the afternoon. I say “raced” because Sam kept the same time schedule as the Coast Daylight just a few hours behind him, despite having to do pick-ups and set-outs along the way. Where he got the name Sad Sam I never did learn, but to SP railroaders, that was always his handle.

As often as not, I would arrive at Gemco only to see a dark signal to the west and a red one to the east, telling me I was just a few minutes too late. But when I was lucky, I was in for a treat.

Impatiently I would wait for Sam, staring at the cantilever block signal to the west, wondering just when it would activate. Never soon enough, the target would go from dark to yellow and then quickly — very quickly — to red. It was Sam. And I knew he was pushing the speed limit.

A moment later, an oscillating headlight would break the horizon, the shape of the lead F unit soon coming into view. And almost as quickly as he came into sight, Sam’s F units and whatever else was on the point would zoom by, a string of heavyweight and economy mail cars obediently following behind, a single two-tone gray Harriman rider coach bringing up the rear.

The “whatever else” referred to the fact that the motive power for Sad Sam was always unpredictable. It was Sam that was tasked to bring the FM Train Masters and “torpedo-boat” Geeps down from San Francisco commute service to Taylor Yard in Los Angeles for a run through the wheel shop. And it was Sam that would have the honor of balancing out passenger power with an occasional extra unit, usually a PA or an E, in the consist. Once in a blue moon a streamlined coach would pinch-hit for the beat-up Harriman.

In the summer, Sam would shrink to a mere half dozen mail cars, but then, as the holidays grew nearer, he started to grow. He was a sight to be­­hold a few days before Christmas: three or four units, sometimes 20 cars — hardly any two alike, of course — but always banging through Gemco at 60-plus. The F units were usually a little seedy, the mail cars in need of a wash, and the Harriman crew coach was perennially devoid of passengers, but to me Sam was a glorious sight. Whatever else the SP would serve up that day, it was Sam that provided the offbeat in an otherwise fairly predictable railroad regimen.

That was in the early 1960s. I can’t believe it’s five decades later. Sam went the way of most mail trains, and somewhere between then and now, the F units, Train Masters, all the heavyweight mail cars, and most of the economy models, disappeared as well. The GM assembly plant is gone now. Gemco is actually busier, but greatly changed from Sam’s day. But memories linger.

Whenever I visited my parents, still living in the same house I grew up in, my route back to my family and my house — especially if it was in the afternoon — always seemed to take me past Gemco. Sometimes, when I stopped to “see if anything’s new,” the target to the east would be bright red.

My mind knew it was an SW1500 switching the far end of the yard, fouling the main for a minute. But my heart always said something else. I knew I was just a few minutes too late to catch Sad Sam.